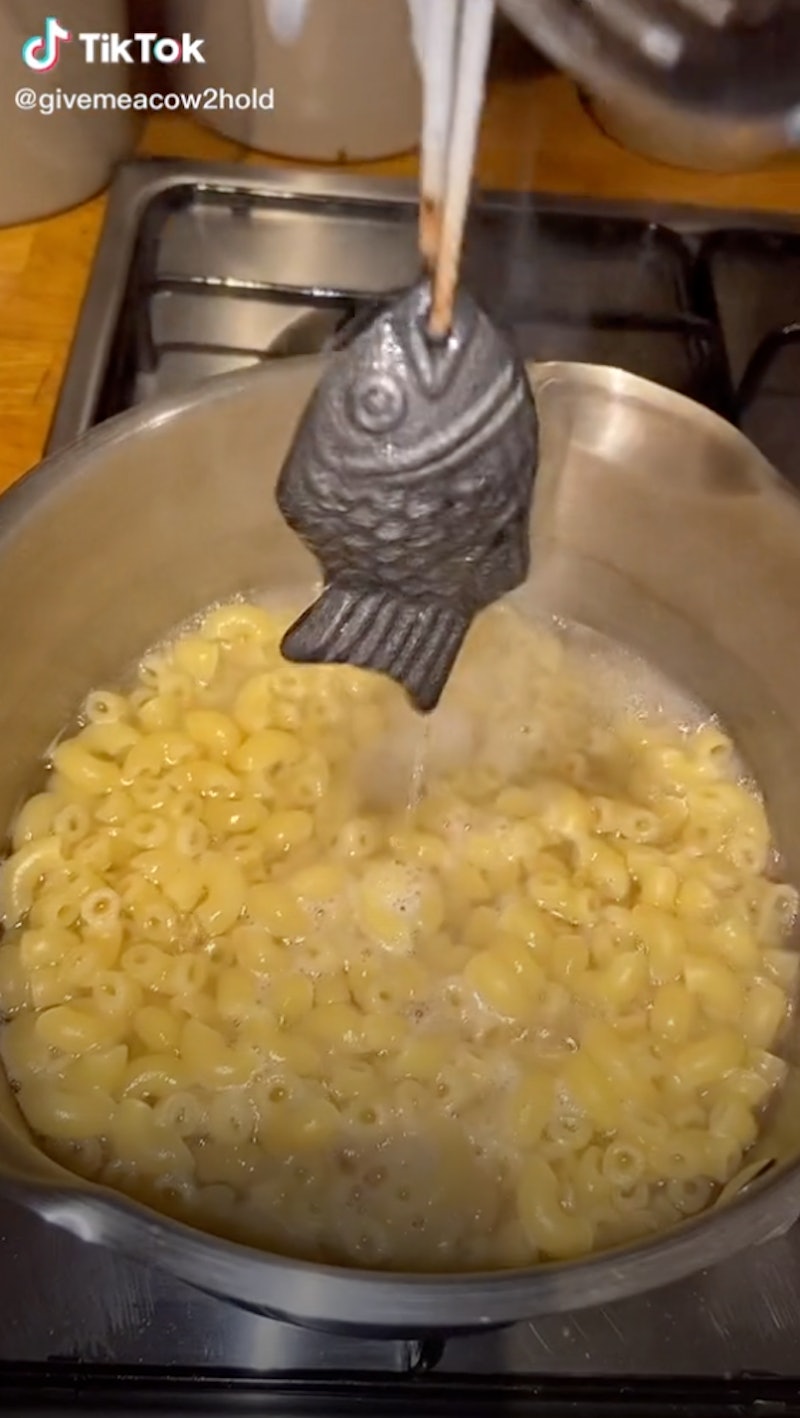 Iron deficiency anemia is the most common blood condition in the United States, affecting about 6% of the population. But its chronic pervasiveness on online discourse could have you thinking everyone and their mother has it. Anemia is one of the big three of Hot Girl Ailments, along with IBS and depression — so termed because people who struggle with these illnesses have decided it won’t stop them from being extremely hot. As a result, Tiktok memes about getting woozy after standing up — a common anemia symptom — abound. A recent related TikTok trend impressively combines the viral power of a good meme with the kind of pull-you-in appeal of a dubious wellness hack, and it’s the iron fish.

As the name suggests, the iron fish is a hunk of iron you steep in your water to help you “cook” more of the mineral into your food. Dr. Christopher Charles, M.D., is credited with inventing the iron fish, after a 2009 visit to Cambodia made him aware of how deadly anemia can be in impoverished communities. It’s inspired by some research suggesting cooking in cast iron pans increased the food’s iron content. Charles went on to publish a paper in the European Journal of Public Health in 2011 after testing several models of the iron fish, which showed it caused short-term increases in blood iron levels (though not long-term ones). In a 2015 interview with the BBC, Dr. Charles claimed that after boiling the fish in water for 10 minutes, an adult would get 75% of their daily recommended iron intake.

On TikTok, you can see people using the iron-enriched water to boil pasta for mac and cheese or to make soup. Why we’re once again discussing iron fish might have something to do with the fact that Lucky Iron Fish, a popular iron fish brand, joined TikTok last November but went viral at the end of September (in perfect coordination with the #GoodSoup trend). Other viral videos hashtagged #IronFish have over 15 million views and often show “low iron hotties,” as one caption to a viral video puts it, discovering the Iron Fish for the first time.

As the conversation around the iron fish’s efficacy now resurges, anecdotal evidence on TikTok says it’s worth a shot. But according to a duet from Dr. Brian Boxer Wachler, M.D., of a popular iron fish TikTok, it’s not fact, it’s cap.

A 2017 study published in Asia Pacific Journal of Clinical Nutrition found that while the Lucky Iron Fish actually might be a safe way to treat iron deficiency, it might not be the most effective. The study confirmed that the longer you boil a fish in acidic water, the more iron is released. However, “Even with 5 fish boiled for 60 minutes, iron levels only approached levels where side effects are observed,” the paper said. Researchers noted that even using two iron fish at once made the water unpalatable. So it seems like you would have to boil your fish (or fish, plural) for hours before the water can help with iron deficiency — at which point, it would probably taste weird. The study did find that using the iron fish would not likely cause any harm, so it’s safe to experiment with at home. Up to you to decide if the soup is, in fact, good.

This article was originally published on May 18, 2015