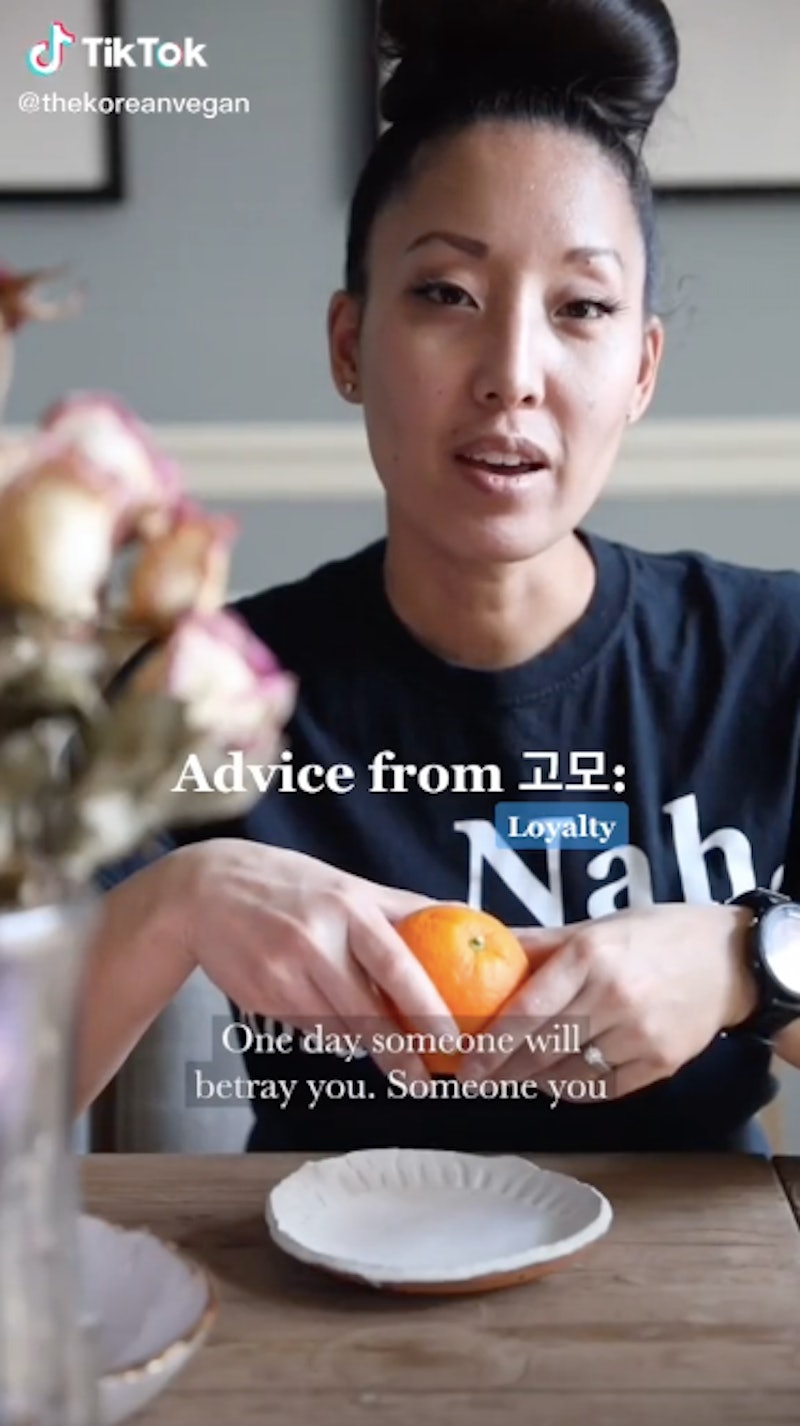 Before you hear her voice, you’ll see it: glossy brown frosting elegantly spread around its neat circumference, dark chocolate sponge peeking out underneath. Joanne Molinaro, aka The Korean Vegan, cuts into the dense cake, revealing its rich inner layers, and adds two glistening scoops of soy vanilla ice cream that drip down the slice. Looking directly into the camera, she intones: “Love is powerful because you are powerful — and no one, not anyone in the entire f*cking universe, can ever take that from you, darling.” Her whole face lights up as she takes a bite. “Now, have some cake before the ice cream melts.”

The scene is from a February 2021 installment in Molinaro's ongoing TikTok series, Advice from a Korean Aunty, where she dispenses her wisdom on issues like heartbreak, gaslighting, and failure to her 2.3 million followers. The 42-year-old’s account has exploded since she made it in July 2020. The personal insights she shares while cooking vegan versions of Korean dishes — from telling her followers “the heart can be colossally stupid” in a video for gyeran mari, to paying tribute to her dad while preparing jjajangmyeon — are key to her popularity. Her TikTok, which she balances on top of her chaotic schedule as a practicing trial lawyer, has even led to a cookbook, now available for pre-order. But beyond veganizing Korean recipes, for which plenty of users seek out her account, Molinaro’s videos vocalize the love that many immigrant families, hers included, convey primarily through food.

“I’m here to give you tough love, realistic advice that other people might not be comfortable sharing with you, but I wrap it up with ‘eat this,’” she tells me over the phone. “It’s my way of saying, ‘I love you, I’m here for you, we’re going to get through this together.’”

“I put a lot out there personally in the hope that people will reciprocate.”

Her vision attracts a loyal crowd of fans and admirers. Each of Molinaro’s videos garners anywhere from 500 to 21,000 comments, many from people swapping stories just as personal as the ones Molinaro shares. Often, she says, comments come from immigrants or first-generation kids, for whom the struggles she reveals on her page — like one incident where she faced down racism from a crush — resonate profoundly.

“That’s so much a part of my identity, dealing with racial hate all my life, so I want to make sure my community understands that I support and empathize with them,” she says.

Molinaro's videos are meant not just for those who've been through trauma, though — she's adamant that her messaging is "broad enough to reach literally anyone.” That includes the people she says reach out to tell her, “I never realized that eating plant-based could be so easy,” or “I'm so proud of you as a Korean person because you're showcasing our food.”

TikTok, Molinaro says, is her “beautiful, very expressive, wild child,” who doesn’t feel the need to be “perfect, curated, or eloquent,” and she is the gomoh — the cool Korean aunt — who helps her followers work through painful or fraught issues in their personal lives. “I put a lot out there personally in the hope that people will reciprocate.”

Molinaro, who’s been vegan since 2016, nurtures her community by sharing recipes — a steaming pot of ramen bubbling in a vegetable-rich broth, or rainbow jeon onigirazu, flecked with purple cabbage and carrots — that she squeezes in time to develop and post around her law clients’ needs. (She often finds herself editing a video for TikTok while eating dinner, or using a spare two hours to film the making of a noodle dish.) She says she views wellness as a “360-degree operation” that isn’t complete “without focusing on your mental health and emotional well-being.” On TikTok, that means sharing dishes she knows her followers associate with love.

“It's simply not a good idea to restrict yourself from those types of foods that make you feel good, that taste delicious, that remind you of your mom or your grandma,” she says. “I don't care if it has 500 calories per bite. Sometimes you need that.”

Bringing these recipes and the people that love them together, she says, is what the Korean Vegan is aiming to do. “I want people to feel invited. I want them to feel a warm hug when they come to my place.”

More like this
Bumble's "Compliments" Feature Lets You Message Before You Match
By Lexi Inks
Here’s How To Make The Spotify Music Festival Lineups Taking Over Instagram
By Alexis Morillo
These Are The Best Supplements For Runners
By Carolyn Steber
The Best Lat Exercises With Dumbbells, According To Trainers
By Carolyn Steber
Get Even More From Bustle — Sign Up For The Newsletter