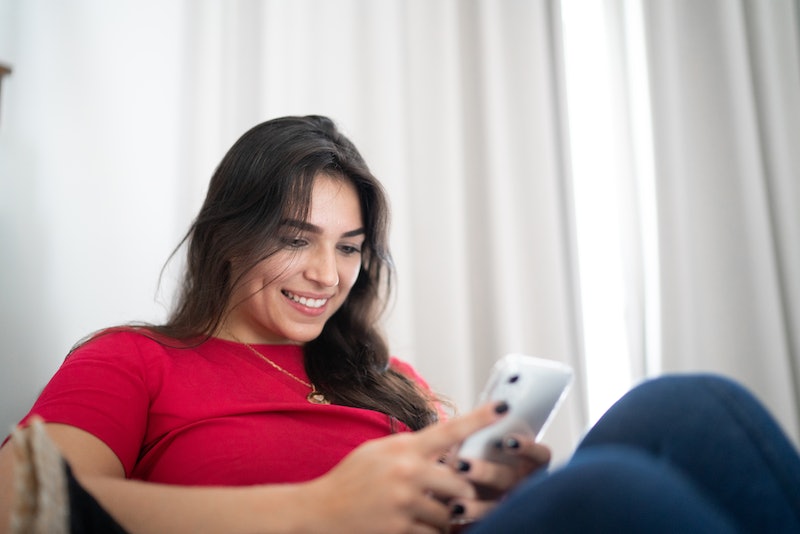 In June 2020, college senior Marc Baghadjian, 21, and Sacha Schermerhorn, 24, connected over the monotony of dating apps and "swipe culture." As a result, the two came up with Lolly, a new, short-form video dating app. Pitched as "Tinder meets TikTok," Lolly blurs the lines between social media and dating apps, and it's changing the way that Gen Z dates online.

In 2018, Baghadjian initially came up with Skippit, a dating app that lets users video chat internally (inspired by his own preference to FaceTime over text). But when bigger dating apps like Tinder and Hinge rolled out their own in-app video calling features, Skippit petered out. But Baghadjian remained dissatisfied with the "yes" and "no" binary of more popular apps and brainstormed with Schermerhorn to create a more interactive way to digitally date.

"We took the inspiration of a video ecosystem from TikTok," Angela Huang, Lolly's press associate, tells Bustle. "Short video content gives users so much valuable information to make more meaningful connections. You can see someone's dog, how they interact with their family, their personality, and quirks."

Like TikTok, Lolly is about showing, not telling. There's no room for bios or mandatory questions to answer — just space to create content.

"We encourage people to post as much as they want," Huang says. "Until you build a profile that showcases your real-life personality."

If you enjoy someone's video (or think they're hot), you can "clap" back at it, which notifies the creator. And if you're interested in chatting, you can "crush" them, giving the creator the option to accept or deny your request. Although the videos themselves are only 15 seconds long, Lolly wants you to take your time. There's no rush or urgency to decide if you're into someone. You'll keep seeing the same users on the vertical feed homepage, even if you don't immediately "clap" or "crush."

When it comes to interface and content, TikTok was a big inspiration for Lolly. In fact, Jamie Lee and Margaux Weiner, both 21, and the founder and head of marketing of the new social app, Flox, tell Bustle that TikTok is impacting the overall culture of Gen Z dating.

"TikTok rewards relatable content and authentic content," Lee says. "It's the antithesis of this Facetune culture that's existed on social media and dating apps for so long. TikTok speaks to Gen Z's desire for authenticity and community building — as digital natives, we've grown up in this curated feed of space, and we're really looking for more authentic connections. TikTok lets people tap into their niche and their own personality and really run with that."

Traditional dating apps are "transactional" and "formulaic," and Lee and Weiner say Gen Z is looking for dating apps with more open-ended connections. Schermerhorn and Baghadjian agree, adding that this generation is also looking to interact with content that's more dynamic than a few photos and a bio.

"Swiping culture is exclusive," Baghadjian says. "We want to focus on multi-faceted attractiveness and personality."

Dr. Carla Marie Manly, a clinical psychologist, tells Bustle that TikTok has attracted Gen Z to apps with more interactive interfaces on a neurobiological level. "The more we supply our brain with instantaneous, high-intensity, high-stimulus apps, the more we will crave interactions of this type," Dr. Manly says. "By comparison, more static, traditional apps may feel boring and far less visually appealing."

And larger apps are taking note: Hinge added video uploads to their profiles in 2017, and in 2018, Tinder added "Loops," short, two-second videos, to make the app more dynamic. "More than half of our members are Gen Zers," a representative from Tinder tells Bustle. "We develop product features with their needs and interests in mind."

Dr. Manly says that quick, dynamic apps like TikTok are linked to shorter attention spans and higher distractability levels. An increased desire for more interaction within the app can be positive. "The more users chose to interact with others, the more likely it is that bonding, social connections will form," she says. "Using short videos to display creativity, talents, and humor is a wonderful way to engage with others."

The Rise of Social Dating

For Gen Z, the divide between real and online life is virtually non-existent. “Sharing content, commenting on each other’s posts, getting to know each other through profiles and photos, this is how relationships are already being formed," Baghadjian says. "Current dating apps don’t have the bandwidth to take on the types of connections that properly represent those currently happening among Gen Z."

Dr. Manly elaborates that because of the normalization of technology and life online, Gen Z's understanding of "social" differs from previous generations. "Not only can sharing content spark new friendships — romantic and otherwise — but it helps build self-awareness and self-confidence," she says. "By helping users build a community that is based on more than superficial looks, more solid, they can better form lasting connections."

So, is Lolly a social media platform? Is it a dating app? Baghadjian says it's both. Dubbing the app a new form of "Social Dating," Lolly mimics social media flirting for a "real life" dating experience. Because, for Gen Z, social media is real life.

"Gen Z has lived our social lives in a digital sense for our entire lives," Weiner tells Bustle. "And we're starting to outgrow the current methods of meeting people that exist right now."

Like Baghadjian and Schermerhorn, Lee and Weiner hope to slow down and "socialize" the way Gen Z connects. They don't want you to know if you "like" someone right away. They want you to get to know people, as you would in a classroom, before deciding how you feel.

"Friendship is not being prioritized in our technology," Weiner tells Bustle. "We want to celebrate all types of connections and restore the feeling of meeting people seamlessly that comes from a group setting."

As for the T9 texting (and life before social media), Lee speculates that the future of Gen Z dating will be taking cues from the past. "Gen Z really yearns for the pre-internet days. We're extremely nostalgic. We worship the 90s and early 2000s," Lee says. "That's a trend to pick up on, how we recognize that we're so addicted to our phones, but ultimately, we want something different."

More like this
18 Hinge Prompt Answers To Try If You’re Looking For Something Casual
By Lexi Inks
Here's Why Trash-Talking Your Ex Can Actually Help You Move On
By Genevieve Wheeler
My Partner Wants Me To Wear A Diaper During Sex. Help!
By Sophia Benoit
Why Being “Too Sensitive” In Relationships Is A Good Thing
By Lexi Inks
Get Even More From Bustle — Sign Up For The Newsletter
From hair trends to relationship advice, our daily newsletter has everything you need to sound like a person who’s on TikTok, even if you aren’t.