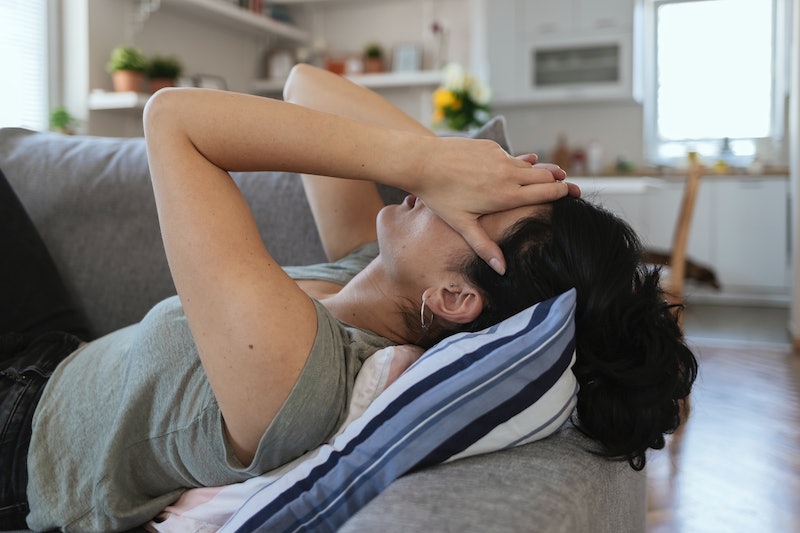 As researchers learn more about coronavirus by the day, one group of survivors are getting increased attention: Long-haul COVID patients. They report coronavirus symptoms lasting months, with strange and scary manifestations of the virus: heart palpitations, tremors, tingling, and even hair loss, according to a recent Indiana School of Medicine survey. There’s not yet a lot of research on long-haulers, though the Centers for Disease Control and Prevention (CDC) recently published COVID-19 guidance saying even mild cases in younger populations might take more than two weeks to recover.

Kate, 35, a marketing director at a financial services firm, has been battling COVID-19 for a little over four months. Below, she tells Bustle what it’s like to continue to deal with this disease.

Right when schools were shutting down in mid-March, I flew for the second time in two and a half days to return home after dealing with a family emergency in Florida. I was more worried than I had been when I left; it felt like the situation got a lot more critical overnight. On the trip back, the airport was really crowded. Hand sanitizer was sold out, and all the dispensers in common spaces were empty. The airport just felt so muggy and gross. I remember thinking, “If I get COVID, it’s going to be here.”

Two days later, I started running a fever and having GI issues — nausea, stomach cramps, and diarrhea. I decided to self-quarantine, even though GI issues weren’t official symptoms at the time. The whole first week, I had random symptoms pop up inconsistently: chest tightness for an hour or two, then a sore throat, but just for a few hours. As the week went on, I got night sweats. I'd wake up and my pillow and sheets would be soaked, and then I’d have terrible chills right after.

My doctor’s office said they were only testing critically ill people, or people who’d traveled from certain countries, so I couldn’t get a test. They told me to keep self-quarantining until I had been fever-free for 72 hours. But my fever never let up.

I tried to work through a lot of my symptoms. There was one day when I felt better, almost two weeks after first getting sick. I told my boss that day that I thought I’d finally beat it. I was on video calls all day, but by night, I was even sicker than before. I finally got a COVID test at urgent care after that day — and tested positive. Except for that one day, I was out from work for a month and a half before I asked my boss about short-term disability, in April.

It has been four months of this. I still have a fever four to five days a week, usually between 99.9 and 100.5. I also have brain fog and struggle to explain things or find the right word, which I’ve never had before. I was talking to my daughter the other day and I couldn’t say the word “curtain.” I finally just had to point to it.

I’m back at work after two and a half months — still remotely — but I need to nap in between meetings. My fevers usually come in the afternoons, so the few times I’ve had to sign off early at work, my boss has allowed it. My immediate team has been really understanding, though I’m not sure how other people in the company feel.

I’ve had three negative tests since March, and my doctors confirmed that my symptoms are a post-viral response to COVID. The good news is that I can see those closest to me and feel less holed up at home. But I don’t know what symptoms will pop up when and how much they’ll affect me. I was supposed to visit my sister, who I haven’t seen since Christmas, and then got abnormally fatigued and couldn’t go. I try to make plans, but then I feel like I’ve been hit by a Mack truck.

Throughout the last few months, my heart rate has been consistently weird, going from really low when I’m sitting, around 40 or 50 bpm, to 140 when I stand up. Cardiologists say they don’t know what to do with me at this point. The hardest thing I still deal with is shortness of breath, which started around week five. I used to play softball in the summer and volleyball in the winter; I can’t even imagine how I could play any sport now.

Right now, all we have to go off of is someone saying, “My doctor recommended this for me and it helped."

I have been chasing each issue without knowing which doctor to go to because it’s so multi-symptom. Primary care physicians send me to specialists, and the specialists say, “This involves more than what I deal with.” One infectious disease doctor told me that what I was experiencing was definitely not COVID-related, that even her sickest and most immunocompromised patients are always better after 100 days. I was so frustrated.

I met some other people online who also had symptoms that weren’t going away. My new friend Amy started a Facebook group in May: Long Haul COVID Fighters. She was wearing a trucker hat when she got tested, hence the name. We have since seen other people call themselves long haulers, which is also the term being used by the medical community. There are now over 8,000 people across the original group and a sister one.

I have felt so alone in this.You have to do all this research yourself and rely on other people with cases like yours, while also trying to not diagnose each other. But right now, all we have to go off of is someone saying, “My doctor recommended this for me and it helped — maybe you should ask your doctor about this too.”

It makes me want to cry in frustration when workplaces, friends, family, and doctors say it’s no big deal, that if you’re young you’ll be better in two weeks. There is so much more to this. I’ve heard of people being laid off or fired because they haven’t gotten better. I’ve heard of doctors telling patients they can’t serve them anymore because there’s no way they can still be sick with COVID, that it all must be in their head. There are lots of individual stories, but no aggregate data. People keep telling me that I’m an outlier, but I know that I’m not.