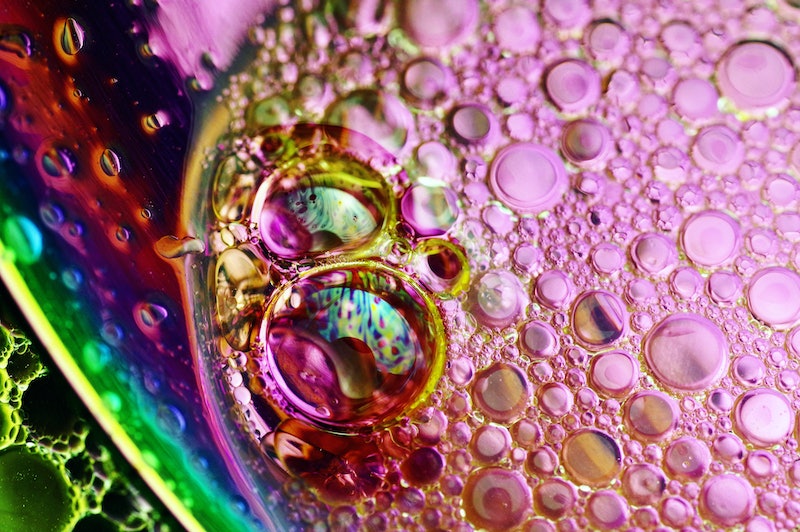 Magic mushrooms and their psychedelic effects have been taking people on trips for thousands of years, but it's only recently that scientists have begun to understand what happens in your brain when you take 'shrooms. Research indicates psilocybin, the active ingredient in mushrooms, can be helpful for different mental health issues, including severe depression.

Manoj Doss Ph.D., a postdoctoral fellow at the Johns Hopkins Center for Psychedelic Research, tells Bustle that your trip involves multiple areas of the body. "The psilocybin chemical in the mushroom is broken down in the liver into the psychoactive form psilocin," Dr. Donald Sansom, D.O., associate medical director and director of the addictions program at the Sierra Tucson addiction treatment center, tells Bustle. That's the compound that makes the walls move and flowers breathe.

The main cell type in the brain affected by psilocybin is called the 5-HT2A receptor. It's one of the brain's receivers of serotonin, a substance that affects mood. "If you block 5-HT2A before administering psychedelics, you no longer get the typical effects in humans," Doss says. A study published in PNAS in 2020 also found that 5-HT2A helps the brain make new connections and find new ways of communicating between cells when you're high, which explains why people on mushrooms report very different ways of thinking. But the weird sensations of trips go far beyond these little cells.

Why The Walls Start To Melt On Magic Mushrooms

The psychedelic effects of mushrooms might start in the brain's thalamus, which filters all the information you receive from the outside world. "Some have proposed that psychedelics turn off this gating mechanism," Doss says. This doesn't mean you tune into parts of the universe that aren't there, but rather that your brain can't figure out what to pay attention to. It could be why you experience what Dr. Sansom calls "perceptual distortions," where things bob up and down or change colors.

Katrin Preller Ph.D., a researcher on psilocybin at Yale School of Medicine, tells Bustle that her studies have shown that when you're high, the thalamus also tends to communicate more with sensory regions of the brain, devoted to things like taste and smell. Your trip's weird sensations could just be the thalamus taking in every bit of information around, rather than sorting it nicely as usual.

Why 'Shrooms Can Lead To Mystical Experiences

If you've ever had a trip where you felt connected to the truths of the universe, the default mode network or DMN, might be responsible. It's the network of brain regions that helps with things like higher-level memory. "Under normal conditions, different regions of the brain work closely together as functional networks," Meg Spriggs Ph.D, a post-doctoral researcher at the Centre for Psychedelic Research at Imperial College London, tells Bustle. "But under the influence of psychedelics (like psilocybin), these networks begin to disintegrate, and we start to see an increase in global connectivity." The opening up of brain networks might lead to all the mystical experiences that people have when they're tripping out.

Spriggs says that this "rebooting" of the brain's networks could help with mental health disorders. "With a disintegration of brain networks comes a relaxation of a person's prior beliefs," she says. "This then breaks the shackles of rigid thought patterns." A study published in Nature in 2017 from the Imperial College team found that this "resetting" might be a big part of psilocybin's positive effects on people with treatment-resistant depression.

Another theory about mystical experiences in the brain involves a tiny region called the claustrum, which is involved in decision-making and attention. Frederick Barrett, Ph.D., an associate professor at Johns Hopkins Center for Psychedelic Research, tells Bustle that the claustrum gets disrupted by psilocybin, and that might cause those weird shifts in self and experience.

Studying Psilocybin In The Brain Is Tricky

It can be tempting to think scientists can "map" the way psychedelics affect the brain. For instance, two separate studies in 2012 published in PNAS and British Journal of Psychiatry showed that psilocybin tends to decrease brain activity in the medial prefrontal cortex, which is involved in memory and decision-making, and the posterior cingulate cortex, which controls your sense of identity. However, Doss says studies of the brain's activity under psychedelics are complex and often badly designed. Dr. Sansom also points out that many factors influence the way your brain and body react to a trip, including your underlying health and mood, personality traits, and your physical surroundings. It's not mushrooms + brain = pink elephants. (And by the way, while magic mushrooms are decriminalized in three U.S. cities, they're still illegal on the federal level, so no, still very much not legal to do 'shrooms unless you're involved in a research study.)

Even though there are still a lot of mysteries about psilocybin and the brain, the compound shows huge promise. "A growing number of clinical trials suggest psychedelics could hold potential for treating a range of mental health conditions, including depression, OCD, addiction and even end of life anxiety — the fear of death in terminally ill patients," Spriggs says. Tune in and turn on, indeed.