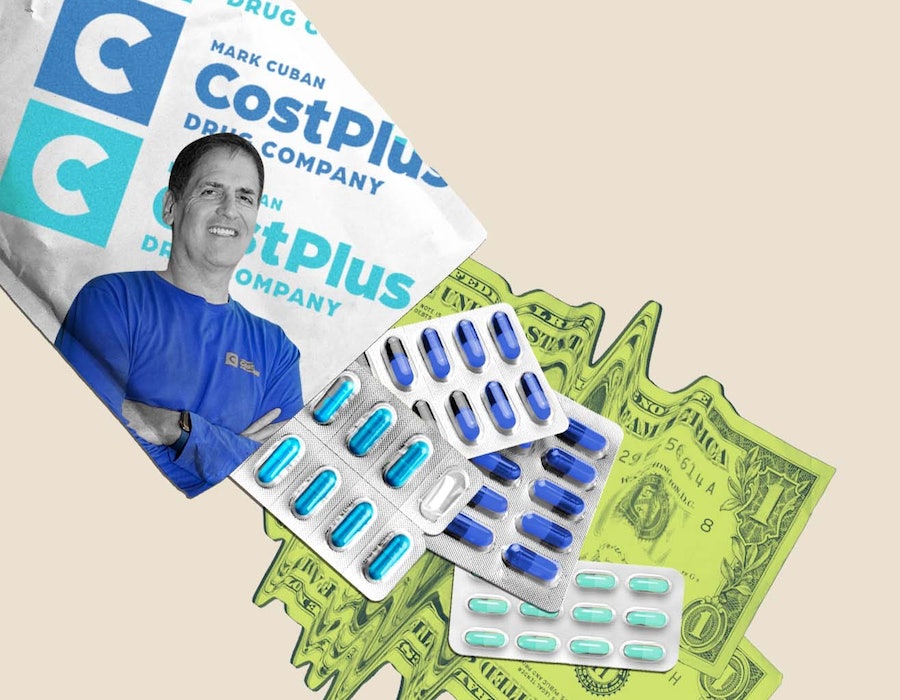 At Mark Cuban Cost Plus Drugs Co., an online pharmacy that launched in January, you can buy the cancer drug imatinib (brand name Gleevec) for $14, which is $2,488 cheaper than the retail price. A month’s supply of an HIV medication is $1,038 less expensive than usual, and a psychiatric drug used to treat schizophrenia and bipolar disorder costs $6 instead of $678.

These are just a few examples of the price differences for the more than 700 generic drugs available at Cost Plus, which treat everything from arthritis to depression to heart disease. Not every medication will save you hundreds — the generic for Monistat vaginal cream, called miconazole nitrate, saves you $6.50 off the $14 list price — but hey, every little bit counts.

These prices may have you wondering what’s the catch? For many of us, seeing a low-cost option when it comes to the U.S. medical system instantly triggers the “scam!” response. But experts say these deals are for real. The company only offers generic drugs, whose prices can be negotiated with the manufacturer, and it cuts out the behemoth of a middleman that is the health insurance industry.

“It’s really not too good to be true,” says Karen Van Nuys, a health economist at the University of Southern California. “This is absolutely for real.”

OK, so how are the prices so low?

Every medication sold by Cost Plus is priced at the manufacturing cost, plus a 15% mark-up, a $3 pharmacy labor fee, and a $5 shipping cost. To Dr. Hussain Lalani, a physician and policy researcher at Brigham and Women’s Hospital who’s published on the topic, this price transparency is what sets Cost Plus apart, even more than the low fees. “There are other ways to get direct-to-consumer generic drugs through companies like Walmart and Costco and coupons through GoodRX,” he says, “but they’re not totally transparent in the way that this company is.”

Do you need health insurance to use Cost Plus?

No. In fact, the company doesn’t accept insurance at all, which is one of the ways it’s able to keep costs down. However, you do still need a prescription from a doctor. To use the online pharmacy, you’ll sign up for a Cost Plus account, make sure the medication you need is available, and then have your doctor send a prescription to Cost Plus.

Why does health insurance impact the price of prescription drugs so much?

This answer requires a bit of a tangent into the complexities of the U.S. health care system.

There are layers of bureaucracy built into private health insurance. One very active layer is the pharmacy benefit managers (PBMs), who, among other things, negotiate prescription drug prices. When you show your insurance card to pick up a prescription at Walgreens, the bill gets sent to a PBM. They pay the pharmacy the price that they pre-arranged with the drug manufacturer and then charge your insurance company. The insurance company pays the PBM, and the transaction is complete.

This system not only bloats the cost of prescriptions, but it also opens the door for financial shenanigans because neither the pharmacy nor the health insurer knows what the other is charging or paying. As a result, what the PBM pays the pharmacy is often a lot less than what the health insurer pays the PBM. “The difference between those two amounts is called the spread, and pharmacy benefit managers collect that spread,” says Van Nuys. “The only person who knows how big that spread is is the pharmacy benefit manager, and they’re pocketing it.”

PBMs aren’t the only reason drugs purchased through health insurers are expensive, but they’re a big one; Van Nuys estimates they raise costs by about 20%. Direct-to-consumer pharmacies, like Cost Plus, eliminate those bureaucratic layers by cutting out both the insurance companies and PBMs.

Does Cost Plus only sell generic medication, and is that another reason it’s so cheap?

Indeed, all the medications it provides are generic. That means the patent on the drug has expired, so the pharmaceutical company that first invented it no longer has a monopoly on manufacturing it — and setting the price. Once a patent expires, other manufacturers can start producing the medication.

“When Mark Cuban goes out to purchase the inventory for his pharmacy that then he turns around and sells to patients, he has a lot of different manufacturers to choose from … because they’re generic,” says Van Nuys. “When there are lots of manufacturers or providers to choose from, prices will get competed down.”

Unfortunately, this limits what Cost Plus can offer. One medication that’s noticeably absent is insulin, since drug companies that manufacture insulin keep tweaking their formulas and obtaining new patents, which prevent the medication from being offered as a generic.

Who would benefit most from a service like this?

Cost Plus and other direct-to-consumer pharmacies are most beneficial for people who are uninsured, have high out-of-pocket costs, high deductible health plans, or expensive monthly prescription drugs.

So what’s the catch?

If you have good insurance, the benefit might not be all that great. One study Van Nuys co-authored in 2021 found that while the prices offered by Costco’s direct-to-consumer pharmacy could have saved the entire Medicare system billions of dollars, it was the same cost or cheaper for patients to use Medicare insurance for 89% of the medications offered.

“In some cases, it may be beneficial because it’s so much cheaper to purchase a drug directly from the Mark Cuban Cost Plus Drugs Co.,” Lalani says. “Other times it may not be, and it might actually be more beneficial to pay out of pocket and reach your deductible and then have better coverage for the rest of the year. So [it’s worth] weighing the risks and benefits based on each individual person.”

The bigger catch is that the most expensive drugs on the market, like insulin, are brand name, and thus unavailable from Cost Plus. “While there’s a lot of buzz about the generic drug market, and 90% of prescriptions are generic, the real cost issues are predominantly in the brand name drug space,” Lalani says. “Those are the ones that people struggle to afford the most.”

Some members of Congress have been trying to reform brand name prescription drug costs for years. To finally do so might require a miracle — or a highly motivated billionaire.

Karen Van Nuys, Ph.D., a health economist at the University of Southern California

Hussain Lalani, M.D., a physician and policy researcher at Brigham and Women's Hospital

More like this
Why Being “Too Sensitive” In Relationships Is A Good Thing
By Lexi Inks
18 Hinge Prompt Answers To Try If You’re Looking For Something Casual
By Lexi Inks
Learning To Love, Not Judge, The Lunchbox Wives Of TikTok
By Esther Zuckerman
I Spent 2 Years Trying TikTok’s Dating Advice
By Kailynn Johnson
Get Even More From Bustle — Sign Up For The Newsletter
From hair trends to relationship advice, our daily newsletter has everything you need to sound like a person who’s on TikTok, even if you aren’t.