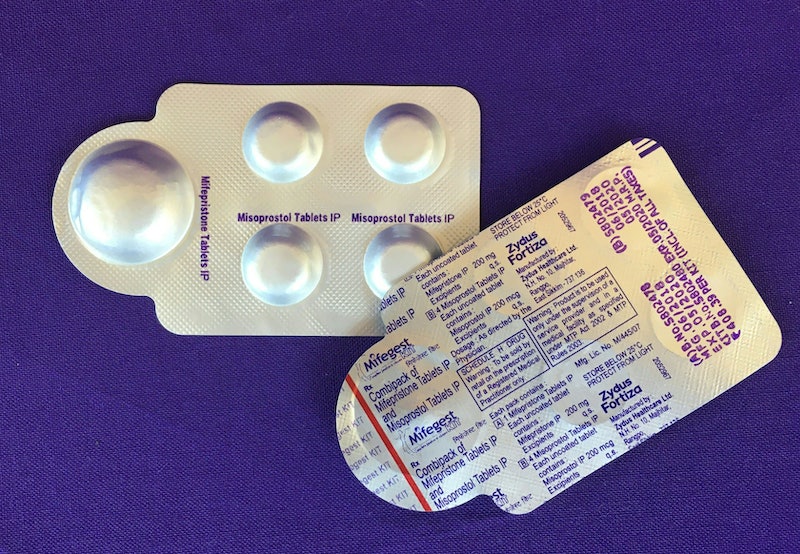 Twenty years ago, the FDA approved Mifeprex (the brand name for mifepristone), the first abortion pill made legal in the United States. Combined with misoprostol, the two medications induce or complete a miscarriage. Medication abortions are the most common form of abortion in the first trimester, and 99.7% of medication abortions have no serious adverse effects. When it was first approved in 2000, reproductive health experts and advocates hoped it would usher in a new era for abortion access for Americans, where ending a pregnancy would be as easy as going to the pharmacy.

But after its approval, medication abortion was subject to restrictions. After Roe v. Wade guaranteed the right to a safe legal abortion in 1973, state-level abortion restrictions began to ramp up, and over 37% of them were enacted between Jan. 1, 2011 and May 31, 2019 alone. At the beginning of September 2020, Sen. Ted Cruz, along with 19 other Republican senators, wrote a letter asking the FDA to take mifepristone off the market completely, which would effectively ban medication abortion.

Below, reproductive health experts tell Bustle what’s happened with medication abortion over the past 20 years — and where it’s headed.

Why Medication Abortion Was Approved In The First Place

Kristen Moore, director, Expanding Medication Abortion Access (EMAA) Project: Advocates wanted to bring RU-486 [another name for mifepristone] to the United States starting in the ‘90s. In France, it had been available for about a decade.

Dr. Daniel Grossman, M.D., director, Advancing New Standards in Reproductive Health (ANSIRH), University of California-San Francisco Bixby Center: Primary care doctors and private OB-GYNs could have this service available outside of a specialized clinic — it could be done in patients’ homes.

Dr. Jen Villavicencio, M.D., MPP, Darney-Landy Fellow, American College of Obstetricians and Gynecologists: This medication is safer than ibuprofen in terms of how many people get seriously ill or die from it. It’s an extremely safe alternative to having a procedure [like a suction aspiration abortion] in the first trimester. And there’s no doubt that it’s safe for a patient to take it at home, just like a Tylenol.

Kelsea McLain, patient: When I had my first abortion in 2010, I was unemployed, living in Florida, without health insurance. I remember looking at the pregnancy test and thinking, “Oh God — I’m going to have to be in stirrups.” I decided to try herbal methods of abortion, but it didn’t work, and felt risky. An abortion fund ultimately helped me pay for a medication abortion. To have this little bit of choice in a time when I felt out of choices was empowering.

Restrictions Started To Pile On

Just after Mifeprex was approved, reproductive health advocates were also pushing to make emergency contraception available over the counter. This was ultimately successful, but not without some fight. Because of that, there was a sense that people didn’t want to push back to loosen the restrictions on medication abortion, Moore says.

In 2004, states began issuing requirements, on top of existing regulations, that mifepristone be administered in-person. In some states, providers had to tell patients that medication abortion is reversible, which is not true. In 2007, the FDA’s newly created Risk Evaluation & Management Strategies (REMS) program created additional regulations and restrictions on certain kinds of medication, citing safety concerns. In 2011, Mifeprex was folded under the REMS program, formalizing restrictions that had been in place previously. Doctors had to sign up with mifepristone’s manufacturer to become a certified prescriber. The list of doctors who provide medication abortion is publicly available, which can present safety concerns. Doctors have to purchase, stock, and distribute the medication in-office, which is cost prohibitive for physicians who aren’t specialized abortion care providers.

Grossman: The restrictions that the FDA imposed on mifepristone in 2000, the state laws imposed restricting access in 2004, and the REMS program really limited the expansion of access we wanted. In particular, the requirement that the medication has to be dispensed in the hospital or clinic where you’re receiving it, and can’t be written or dispensed by a pharmacist, has been especially limiting. The number of OB-GYNs who provide medication abortion could potentially double if physicians could write a prescription for the medication.

Villavicencio: REMS are usually on medications with very serious side effects, but REMS doesn’t improve the safety of this medication.

McLain: A few years after my first abortion, I realized I was pregnant again. I was living in North Carolina and working for an abortion provider; I asked my boss how I could get an abortion from her. I had to receive an ultrasound even though I knew exactly when I conceived the pregnancy, and I knew I had no signs of an ectopic pregnancy. I had to hear the state-mandated script about the risks, even though I worked with a provider and regularly provided options counseling. Then I had to wait an additional three days before getting my medication abortion, because the state said so. The whole process was sobering, insulting, and really drove home how demeaning and demoralizing these added barriers are.

Data Showed It Was Safe. But It’s Still A Fight To Access It Today.

In 2016, the FDA updated the label for Mifeprex, allowing it to be taken at a lower dosage and with only one doctor’s visit, where before it was two. The label change also increased the gestational age it could be used for, from 49 days to 70, which made 75% of the abortions provided in the United States eligible for medication abortion. Despite the label change, “the FDA concluded that certain restrictions continue to be necessary to ensure the safe use of Mifeprex,” the agency tells Bustle in a statement. Many reproductive health experts believe the label change underscored how unnecessary the remaining restrictions on medication abortion were, especially given its proven safety record. During the pandemic, these last barriers felt even more unnecessary to them.

Dr. Julie Amaon, M.D., medical director, Just the Pill: The REMS made sense at the time since Mifeprex was a new medication. We needed to make sure it was safe to use. But now we have 20 years of safety data showing this is as safe a medicine as I can possibly prescribe to a patient.

Grossman: There’s a lot of evidence that non-physicians like nurse midwives, nurse practitioners, and physicians assistants can safely provide medication abortion. Unfortunately, this isn’t allowed in the majority of states.

Moore: The new label said you can take this medication at home, whereas before it said you had to take it at the clinic. It makes the in-person distribution requirements insane during COVID.

Villavicencio: The FDA has lifted a lot of REMS requirements on other, riskier medications because of the pandemic, but did not lift any of the REMS on medication abortion. [In July, an injunction allowed doctors in 33 states to mail medication abortion to patients through the duration of the pandemic; the ruling doesn’t apply to doctors in the 17 states that specifically have rules against telemedicine and abortion.]

Grossman: Medication abortion is very appropriate for telemedicine. In our 2017 study of 20,000 medication abortions, comparing in-person visits with telemedicine visits, there was no significant difference in the rate of complications, and the overall rate of failure was very low. The effectiveness is the same whether done via telemedicine or in-person. And patients who had virtual visits rated satisfaction higher, because it meant they could get it closer to home and have the abortion sooner — which could mean the difference between getting it at all.

McLain: I’m very comfortable with the idea of my body going through the miscarriage process as it would on its own. Medication abortion is really important to me from a privacy aspect.

What’s Next For Medication Abortion

Despite the setbacks of the last 20 years, experts are optimistic that the future holds promise for broadening access to medication abortion — and reducing abortion stigma in general.

Villavicencio: Having so many barriers is just part of the norm now, but ideally, a start toward increasing access would be removing the REMS, so a patient doesn’t have to go to a doctor’s office to get the medication.

Moore: We want more flexibility in the system. Even if we can’t remove REMS, can a patient consult with a licensed health care professional to show they’re less than 10 weeks pregnant, and then that provider sends a prescription to a specialty or mail-order pharmacy that sends the medication to patients? And if you wanted to go to an abortion clinic, you could?

Grossman: The story of medication abortion over the past 20 years in the United States is largely a success story, but it’s also a story of disparity. It’s clear that patients like this treatment, that it’s safe. But we have seen an unprecedented expansion in state-level restrictions around abortion over the past decade. There are six states that only have one clinic left providing care. And the patients most affected by restrictions on medication abortion are majority low-income or people of color, and three-quarters live at or below 200% of the poverty line. Those are the patients who have to confront these obstacles.

McLain: Having control and choices really matters. Being pregnant when you don’t want to be is devastating. We should be giving people as much autonomy and control as possible in this situation.

Villavicencio: In 20 years, I hope the conversation around abortion has been significantly depolarized — that we get to a point where ending a pregnancy is not filled with vitriol, but compassion and empathy and understanding. I hope in the next 20 years, abortion is understood as an issue that women talk about with their families and with their health care providers, and then can make their own decision on how to have the abortion they want. It’s safe enough for that to happen.

Interviews have been edited and condensed.

More like this
How Ovulation Affects Your Sense Of Smell, Libido, & More
By JR Thorpe and Lexi Inks
The Case For Following A Menstrual Cycle Workout Plan
By Emma McGowan and Carolyn Steber
How Many Burpees Should You Do Per Day? Here’s What Fitness Trainers Say
By Carolyn Steber
The 11 Benefits Of Aerial Yoga, According To Trainers
By Carolyn Steber
Get Even More From Bustle — Sign Up For The Newsletter
From hair trends to relationship advice, our daily newsletter has everything you need to sound like a person who’s on TikTok, even if you aren’t.