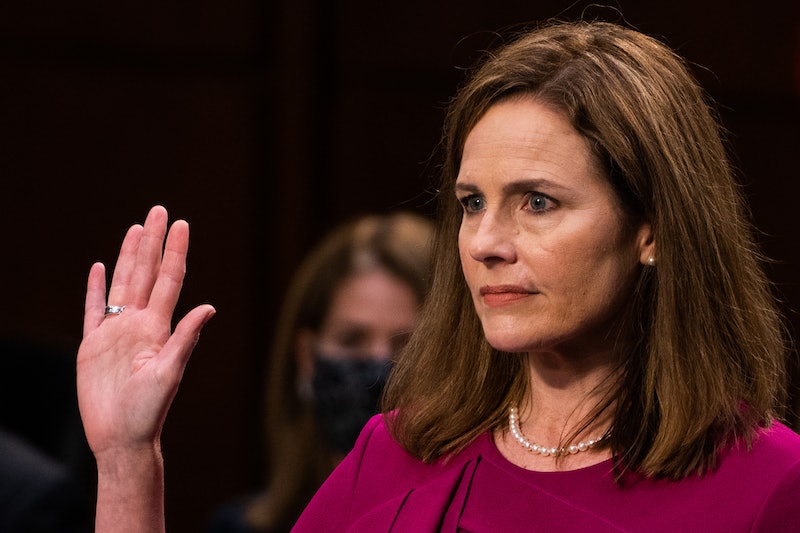 After Amy Coney Barrett's confirmation to the Supreme Court by the Senate, you might be thinking about the future of reproductive freedoms in the U.S. — and you're not alone. With a 6-3 conservative supermajority on the Court now a reality, it's a genuine prospect that Roe v. Wade, the landmark 1973 ruling that enshrined the right to abortion, might now be endangered. Coney Barrett is seen as an ally of the anti-choice movement; she was a signatory on a letter calling Roe v. Wade 'barbaric', and she was part of the "University Faculty For Life" at Notre Dame University, supporting anti-choice groups.

If you feel at a loss for what to do to help, national abortion funds, which help people who couldn't otherwise afford it access the procedure, need your support more than ever.

A majority of Americans support Roe v. Wade, according to national polls cited by NPR. But if the Supreme Court declares it unconstitutional, a host of states are poised to immediately outlaw or restrict abortion thanks to "trigger laws," which would come into force the minute Roe fell. (By contrast, the right to an abortion is only enshrined — meaning it's safe no matter what happens with Roe — in 21 states.)

You can channel your worries into fundraising for national abortion providers and funders. These organizations help people across the U.S., including those who are economically disadvantaged or far away from providers, obtain the procedures they need or want. You can also support your local abortion funds by searching your state and abortion fund. Here's a guide to where you can give on a national level.

"With Justice Barrett on the Supreme Court, abortion access — including the future of Roe v. Wade — is in jeopardy," the Very Reverend Katherine Ragsdale, President and CEO of the NAF, said in a statement on their website on October 26.

The National Network Of Abortion Funds

The National Network of Abortion Funds brings together over 70 individual and state abortion funds from across the U.S. into one network to share resources, organize, and make sure they have the support they need. They have several kinds of donations: one, a general gift to the National Network, means they can give your money to any region or fund that needs it at any given time, while another, the Collective Power Fund, channels resources to 20 states that have highly restricted abortion access, including Kentucky, Texas, and Utah. The Collective Power Fund funds all aspects of abortion care, including its cost, transport, childcare, lodging, and a doula on hand during the procedure.

The Women's Reproductive Rights Assistance Project (WRRAP) works across the U.S. to help people access the funds to get safe abortion care. They pay health clinics who are part of Planned Parenthood or the NAF, on behalf of people who wouldn't otherwise be able to afford an abortion or emergency contraception. 90% of every dollar donated goes to funding abortion access; the rest goes to funding the Project's running costs.

The Northwest Abortion Access Fund serves Washington, Oregon, Idaho, and Alaska. It has a toll-free hotline and clinic-finder for people in each state, pays for abortion care by sending funding directly to clinics. It also helps people arrange transportation and lodging for their procedures.