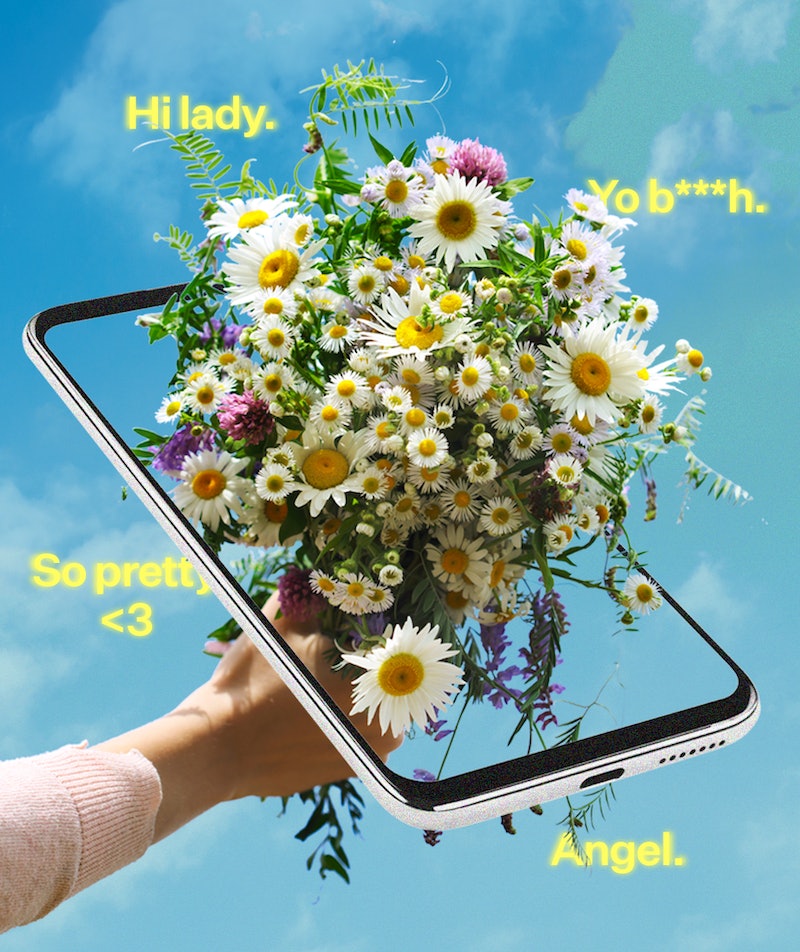 I know that women shouldn’t trust women who don’t have women friends. Other women have told me that.

Throughout my life, I have always had a few very intense friendships with other girls. But they weren’t what women with French-tip acrylics at the hair salon called girlfriends. We didn’t go for drinks together like the gals in Sex and the City, or set out on late-night adventures like Abbi and Ilana in Broad City, or cover up a crime together like the Flossy Posse in Girls Trip. I know women whom I could call to help me bury a body, and they know they can count on me for the same. But growing up, television was my model for what female friendship looked like, and so what I wanted was to be invited to the bachelorette party.

Television was also my model for what being a woman might look like. I studied videos of young Julia Roberts on Letterman, tossing back her head to laugh, disparaging him with an effervescence that wasn’t exactly flirting but a tonal note that would influence the way I spoke to powerful men. I watched 30 Rock seven times straight through, quizzing myself in the shower to see if I could complete Jenna Maroney’s deranged, delicious lines, a pizzazz that influences how I interact with my publicist. I picked up the manic intensity with which I talk from Lorelei Gilmore, and my way of discussing ideas — like closed-eye, guitar-soloing — from Laura Wexler, one of my professors at Yale.

But when I hung out with actually interesting girls and women socially, I choked. I felt like I was auditioning to be a girl — the right kind, accessible to me if I just tiptoed. They were the judges. I feared they would see through me, and know that it was all performance. I was wearing a mask the whole time I was in social interactions, feeling free only when I was around a few people. And when I was free, I just wanted to be quiet.

Texting a girl platonically has always been way more nerve-wracking than texting a crush, even when I had AIM. I would try out syntax I picked up from social media to suggest closeness.

I’ll pause here and say that a few months ago my doctors and I began using the language of autism spectrum disorder (ASD), the term for the vast and rich autism spectrum, to discuss my brain and the way I move through the world. We also sometimes use the language of borderline personality disorder. There’s a problem in media depictions of characters with autistic characteristics not being identified as autistic, like Sheldon in The Big Bang Theory. It’s hurtful, and I don’t want to contribute to that. So I hope insight into my life widens your understanding of what the spectrum can look like, especially as an adult Latina whose special interest is cults. But my experiences remain my own, and I don’t want to speak for a community I just discovered.

Nowadays, I’m pretty reclusive, even for a writer, and most of the girl friends I’ve met over the past few years have not met me in person. We text or send emails instead. Throughout the pandemic, I had a reason to not see anybody, so I perfected ways to show people I loved them from afar.

That’s how my flower thing started. I discovered I liked receiving flowers last year, when I had essentially emotionally blackmailed my editor into sending them to me on multiple occasions, both celebratory and in sympathy. Even when I knew they were coming, I felt a thrill — nectar for the birds, Ophelia’s funerary ornaments! So I started sending them to my girl friends as well. I couldn’t believe that all this time we could have just paid for freshly pulled stems to be delivered to friends for only a small amount of money.

When they grabbed the flowers I carefully picked out for them, I knew they felt how much I loved them — even though, had we had been chilling in person, I would have gotten overheated and probably felt enormous dread. To me, texting about the arrangements felt like a hug. I am otherwise only comfortable hugging my partner or older men.

A few months ago, a woman I care about finished a project she was proud of. I went online and found a local florist in the town she was staying in to send a bouquet. As I scrolled his website, my eye caught a 6-foot tall heart arrangement made of pink flowers. It had a pink bow on it. It had a stand.

I placed my order. The florist called back to say he felt uncomfortable delivering a funeral arrangement that size to a private residence — it seemed morbid. It hadn't occurred to me it might be unusual. My friend loved it.

More like this
Megan Rapinoe's Relaxation Hack Is Super Dreamy
By Carolyn Steber
30 Clever Ways To Slide Into Your Crush's DMs
By Griffin Wynne, Carolyn Steber and Lexi Inks
21 Signs You're Not In Love Anymore
By Sara Altschule, Kathleen Ferraro and Carolyn Steber
The 9 Best Exercises For Piriformis Syndrome Relief
By Carolyn Steber
Get Even More From Bustle — Sign Up For The Newsletter