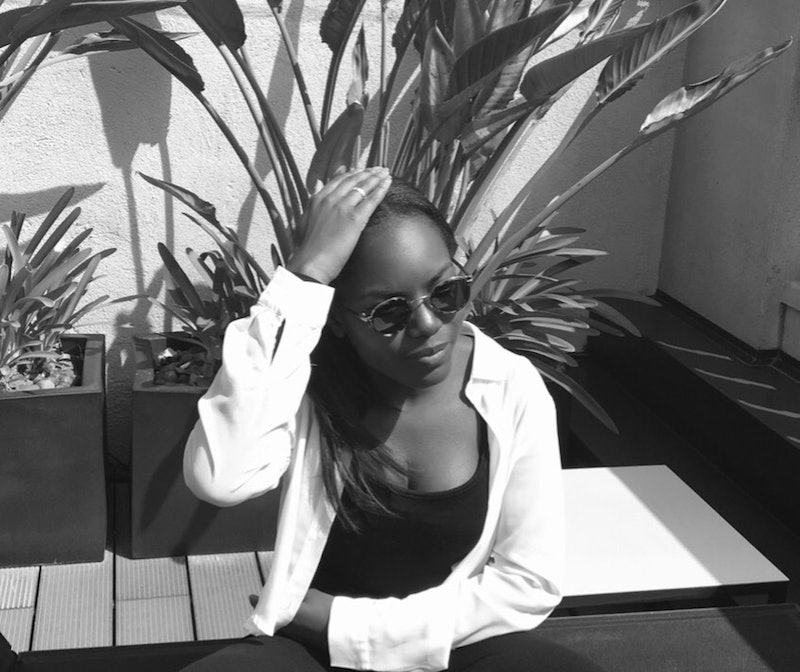 Courtesy of the author

Last year, I attended Black Girls Fest alongside hundreds of other Black women and girls from across the UK. It was a day filled with learning and discussion, and was a space where I could mingle and chat to many different people. As more and more people spilled out into the market area of the festival, I felt so much warm energy. But there’s one conversation from that day I keep coming back to.

Quite early on in the event, I started chatting to an older man from Dominica (the small island in the Caribbean near Guadeloupe and Martinique, not to be confused with the Dominican Republic) who was there to run a stall. I told him “I'm Dominican too!”, to which he replied “Oh, nice! When did you move here?”

I paused. There was no answer to his question. I wasn’t born in Dominica, I don’t speak Patois (the French-based creole language widely spoken there), and, more than that, I’ve never even visited the island.

It’s a question I come up against a lot, and every time I’m left a little bit speechless. My mum is from Dominica and my dad from Nigeria, but I have never visited either country. When I tell people this, I feel like it changes their perception of me, like they don’t truly see me as Dominican or Nigerian anymore. It leaves me feeling isolated, and even slightly resentful. It doesn’t seem fair or logical to me that my Blackness should be determined by whether I have physically been to the places my ancestors called home.

It doesn’t seem fair or logical to me that my Blackness should be determined by whether I have physically been to the places my ancestors called home.

My parents moved to the UK when they were both under the age of 10. In technical terms, they would probably be defined as the so-called “1.75 generation.” Popularised by Professor Ruben Rumbaut in 2004, it’s a term used to describe people who are somewhere in between first and second generation – they are children who immigrate in their early years with parents who are immigrating as adults. Still with me? OK, good.

Although I’m very proud of my background, I’ve always had a complex relationship with my identity. In some ways, that’s down to this pressure I feel to choose a ‘box’ to fit into. I fluctuate between my different identities whenever someone asks me where I’m ‘from.’ “I was born and raised in London, but I’m Dominican-Nigerian,” I usually say (for what feels like the hundredth time).

Although I’m a British citizen, I rarely refer to myself as British. In part this is because the institutional racism that exists here, which makes me feel slightly detached from Britain. Referring to myself as British would also make me feel as though I’m distancing myself from my Blackness. Although ‘Black British’ feels like a realistic middle ground, it reminds me of the monotony of filling out a form or application. I’ve also found it’s often used by white Brits to imply that a person isn’t truly British – whatever that means.

Although I’m very proud of my background, I’ve always had a complex relationship with my identity.

Growing up, I connected with my heritage through spending time with my Dominican family. At least once a year at Christmas, my family and I would travel to Doncaster, which was where most of my Dominican family were (and mostly still are) based. I’d see all my cousins and uncles, and we’d gather in my grandma Wilma’s house, which we all thought of as the ‘hub’. She would cook us hearty meals she ate growing up in Dominica, often cooking her red bean soup or, if it was a Friday, fried fish West Indian style. I was only 6 years old when she passed away, and my grandma was sadly one of our last connections to Dominica. Although I don’t remember much about my time with her, the memories I do have bring me a lot of warmth and comfort.

And I still find ways to connect with my heritage now, too. I was at a gathering earlier this year hosted by a friend who moved to London from Nigeria only a few years ago. I loved hearing the stories they told from “back home” and eating the food. But it was hearing the accent that was most poignant for me, as it reminded me of my late grandad who had a strong Yoruba accent. It left me longing for the times I used to spend with him but also guilty for not asking him more about my Nigerian culture, his younger years, and his experiences.

I’m often asked why I haven’t visited Dominica or Nigeria, and why I have visited so many other countries before my own, to which I give the simple and honest response: “I just haven’t got round to it.” That’s usually greeted with shocked faces. “But I plan to visit soon!” I quickly add, almost as if to pre-empt any questions that would make me feel any more judged or different.

I know that when I finally visit, it will be an overwhelming, transformative experience.

My family and I were planning to visit Dominica before my grandma passed away, but it still hasn’t happened. The closest I have been to Dominica is Jamaica, which I visited two years ago. Although, as an island, Jamaica is quite different to Dominica, being there still made me want to visit even more.

When I finally do Dominica and Nigeria, I want to experience it with my whole family and with a relative who has local knowledge so that I can explore it in its entirety. While I’m not naïve to the fact I will probably always be viewed as a visitor, I want my experience to be as authentic as possible. I know that when I finally visit, it will be an overwhelming, transformative experience.

My Dominican and Nigerian identities mean so much to me, but one thing I know for sure is that I am a Londoner. To me, being a Black Londoner is such a uniquely beautiful experience. London encompasses so many different forms of Blackness, with people from the African-Caribbean diaspora taking aspects of their heritage and merging them together to form a new culture with common understanding. It’s a space where I can explore, expand, and embrace all parts of my identity. In other words, London is – and always will be – home.

More like this
19 Latinx Therapists & Mental Health Experts To Follow On Instagram
By Kaitlyn Wylde, Naydeline Mejia and Lexi Inks
21 Signs You're Not In Love Anymore
By Sara Altschule, Kathleen Ferraro and Carolyn Steber
Got Brain Fog? Here Are The Best Supplements For Memory & Cognition
By Carolyn Steber
Here's Why Your Knee Hurts When You Bend It
By Carolyn Steber
Get The Very Best Of Bustle/UK