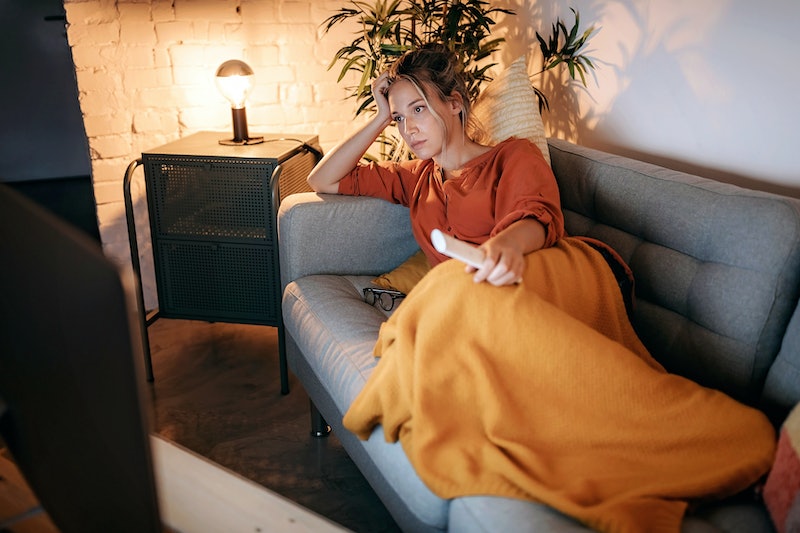 Maggie*, 32, lived happily with her partner for over seven years, after getting married in 2013. Things have changed since those halcyon, pre-pandemic days, she says.

"We are definitely no longer in the honeymoon stage," she tells Bustle. "Lately, I've been getting mad because my husband uses too many cups and leaves them out," she says. She realizes they shouldn't be bickering about something "insignificant," but that even a seeming nonissue like stray dishes "feels like too much to handle right now."

Aly*, 29, similarly finds herself "unreasonably" annoyed with her partner, six months into isolation. "The other day I got so angry at how loud he sneezed while I was on an important call, and it bled into me being annoyed at him all night," she tells Bustle.

Six months into the pandemic, the novelty of holing up with a partner, best friend, or Craigslist roommate has long since worn off. The phenomenon has been described as a "pressure cooker" — tensions that lay under the surface of a relationship come to the forefront, either enriching your bond with your housemate or turning you against each other. Back in March, patients of psychologist Jeffrey Rubin, Ph.D., shared they wanted to use lockdown to get closer to their quaran-teammates. Now, he says, many report they can no longer stand each other.

Is COVID-19 ruining friendships and relationships? Is it exposing issues that were previously overlooked? Or, is the pandemic just making us too irritable to get along?

According to Rubin, it's a trifecta. "Underlying fault lines [in relationships] have been radically brought to the surface," he tells Bustle. Your roommate's takeover of the living room for their gaming setup is a much bigger deal when you're trying to WFH, as is your BFF's habit of calling you right when you're going to bed. These interpersonal stressors can compound your unique reaction to the ongoing health crisis. "People have unmanageable feelings right now. They are not equipped to deal with what they are going through," Rubin says.

"People don't become better under crisis; they revert to a lower level of emotional function."

According to psychologist Alexandra Lash, Psy.D., feeling overwhelmed by your partner's dish-wasting habits is par for the course. "It's easy to get upset over things that are tangible," she tells Bustle. "We don't have the answers we need when it comes to understanding the pandemic and the future, but we do know where a used cup goes." It's not that we're projecting our circumstantial anger on our partners; rather, it's that we've passed our emotional threshold. "Many people are now past the ability to tolerate stress," Lash explains.

This overwhelmed state happens when you overload your body's "surge capacity," as Ann Masten, Ph.D., psychologist and professor of child development at the University of Minnesota, explained to Elemental. It's sort of like low power mode, but for your adaptive systems so you can get through a crisis in one piece. The problem is people have depleted that reserve of emotional and physical energy, without a chance to charge their battery, so to speak. "It's harder for us to be compassionate right now, we are emotionally taxed," Rubin says. "People don't become better under crisis; they revert to a lower level of emotional function."

If people were able to rely on their self-soothing activities, like taking time apart from partners, traveling, going to a yoga class, or visiting friends, there might be a way to be more "constructively close," Rubin says. Though reopening has allowed many of these activities to take place again, you might not feel comfortable doing them at the level you did pre-pandemic. Identifying what your most important self-care activities are, and finding pandemic-safe alternatives or modifications, can help you take care of yourself in that way.

According to Lash, feeling annoyed is not in itself a cause for concern. But if you're distressed — missing more than a few nights of sleep, or can't muster an appetite for days a time — it could be a sign of depression, or burgeoning mental health issues. "Feeling agitated is understandable. But if the way you feel is impacting your functioning and you can't focus, are lashing out at people, or finding that it's impacting your health and motivation, seek help from a mental health professional."

There's no shame in struggling right now, Rubin says, noting that many people are more than just overwhelmed. "People are told to just deal and go on with it," he says, adding that the politicization of the pandemic has led to people not feeling protected. "Without a leader that we trust, we're on edge and scared."