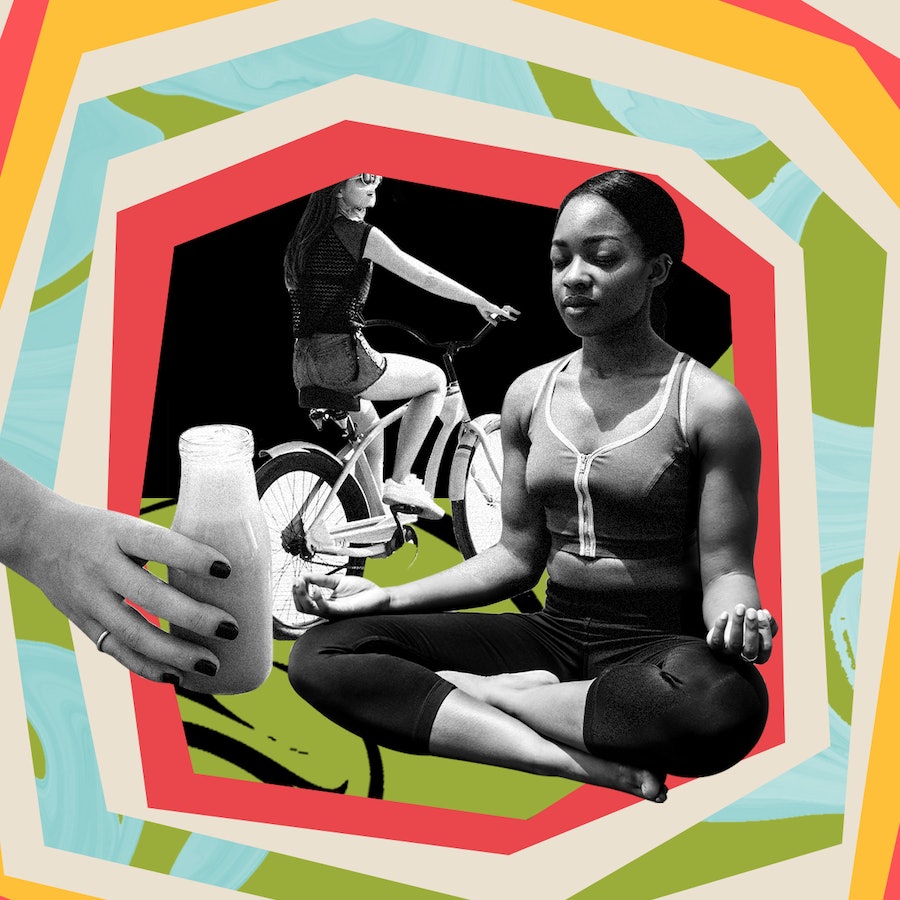 First I read all the articles claiming juice cleanses would get rid of all the “toxins” that built up in my “system” during this sedentary year. Then I read all the articles about how diets don’t work, reiterating that “juice doctors” are not scientists. Still, I was sucked in. I bought a bunch of nutritional powders from the health food store — spirulina, dulse flakes, and barley — mixed them in a Ninja blender with whatever fruits and veggies I had, juiced shots of celery and cilantro, and there you go: the cleanse I barely wanted, destined to do who knows what.

In truth, I wanted a quick and dirty solution to the fact that, despite my home workouts, my puffy pandemic belly won’t go away and I want to look hot — not cute — in a bikini. The last time I did a “cleanse” was six years ago. I was living in Portland, Oregon, and cleansing was the January team-building exercise of the advertising agency I worked in. I looked at the plastic bottles that arrived at our desks, the colored sugar water remains of what were once fruits and vegetables, and assumed this kind of taste deprivation must be a “white thing.” “Why not?” I said. I got to Day Four before deciding that I’d either eat my dog or eat a burger.

Yet, somehow, the prospect of being a body in public again this summer had me believing that a repeat of this experience was the best way to achieve my optimal form. Did I think this through? No, I did not. And friends, as you might expect, my cleanse was a disaster. After more than a year of home-cooked meals and regular sleep, my body was not on Team Juice Fast. You think you’re cute with these home juice recipes at 9 a.m.? Wait till you’re shoving fistfuls of almonds in your mouth this afternoon.

As always, she was right. By 8 p.m. the first day, I was steaming greens, chicken, and brown rice, wondering why I ever thought not eating was the road to health for me personally. Even so, I adhered to my regimen of juices and smoothies for 10 days, alongside regular meals with more whole grains. I pooped so much I had to text my BFF on Mother’s Day to make sure I didn’t need to go to the emergency room, but I lost no weight and kept my pandemic pot-belly.

Happily, by the time the cleanse ended, my social media feed was engaged in some serious counterprogramming. It may be the way I’ve skewed my algorithms, but in between the ads for cleanses are body positive posts from friends. “The beach is gonna get whatever body I’ve got” captions alongside pictures of toddlers in bikinis posing with their adorably puffy bellies. Unlike past summers, there is a collective understanding: The most essential thing is that your body is still here. We spent the last year in a state of constant loss. Being present in our bodies —whatever they look like — is a testament to our humanity and an assertion of our power, our abundance. I write to you from the pleasant company of an outdoor cocktail and shrimp bun, urging all of us to celebrate that, no matter what we feel about our appearance.

Listen, I definitely spent the last month in my fair share of “Let’s lose weight!!” pandemonium. I’m not at my curvaceous heaviest, but I’m carrying a pandemic 10 to 15. And it’s not just the change in weight. After a computer-bound year, everything in my closet fits different. I feel different. But I’m learning that the ways that I judged myself as “healthy” before the pandemic were probably unhealthy to begin with.

Back then, I was a four to five times a week gym rat. If I wasn’t burning through the rotors of an elliptical, I was in a hot yoga studio burning through all my teenage body dysmorphia demons in front of a wall of mirrors with about a hundred other folks. In January 2020, I did my first yoga retreat, a long weekend of basically uninterrupted yoga at the studio a few blocks up the street from my Brooklyn apartment.

Sweating? In a room together? Intentionally? You might as well ask me to eat the first piece of office birthday cake with the candles blown out by a stranger.

Having recently moved to New York from Portland, where “yoga retreat” is synonymous with Chardonnay moms in Lululemon, I was happy to see that I didn’t stand out as the only BIPOC butt in downward dog. I loved that my community-oriented studio really did adhere to the motto of “all bodies welcome.” But I was surprised that, in the midst of that inclusivity, we were still victims to many of the vanity traps that the Instagram world often equates with health.

Our plus-sized yoga guru often emphasized how people left her retreats with their body types fully transformed. Two days into the retreat, I struck up a conversation with a subway conductor who had joined the retreat with his wife. He hadn’t seen the differences he wanted yet and suggested he might start fasting throughout our remaining days to whip himself into shape. Three days? No food? Hot yoga??

The guru was right, I did love the way my body looked after five days of intense yoga. But as the world closed down, I opened up to forms of motion that I’d been ignoring, ones that keep me healthy and make me happy. I wasn’t much for Zoom yoga, but I learned I did like Zoom meditation sessions. Sharing virtual space with people to slow down our breaths in the privacy of our homes, instead of holding my breath in some elaborate posture I wanted people to envy in a yoga studio, was relaxing.

I got a bike. Although I expected to use the bike just to run errands and ride around the park sometimes so I wouldn’t get stir crazy, I was surprised to realize how much I enjoyed the freedom to move that freely, more freely than I was prone to do when I took public transportation and Lyft rides for granted. Even though my city looked less like the city was before shelter-in-place, on a bicycle, I felt more integrated into it than I ever had before.

As I return to the world of exercise 18 emotionally challenging months later, what I long for more than perfect thighs is that freedom to move. I’m listening to myself. I take naps when I need them. I eat when my body wants to. I don’t do yoga all the freakin’ time. Outside of work, I only connect with the people who make me feel good. At work, I’m OK with saying something is “too much.” I forget important deadlines regularly and don’t punish myself for that with harder workouts. Who I was before really isn’t as good as who I am now. And my diet and exercise reflects that.

I’ll probably never return to the world of 100-person hot yoga. Sweating? In a room together? Intentionally? You might as well ask me to eat the first piece of office birthday cake with the candles blown out by a stranger. Honestly, I can’t believe we ever did this.

I told my meditation guru about my new, less appearance-driven approach to health while we were talking in a private session. She described it as an advancement it as “life hacking,” a move toward maturity. “In our early stages of womanhood, we tend to push our displays of feminine strength outward,” she said, “but as we develop, we recognize that so much of our power is what we channel inward. The more we learn to control our heart rate, the more we learn to control a room.” But I couldn’t help but think about how much my pursuit of movement, not exercise, felt like how I kept healthy as a kid. I wasn’t counting steps or calories. I was turning cartwheels and circling the block on my scooter, not to signal to the world that I’m healthy but because moving my body was my way of saying, “here is me.”