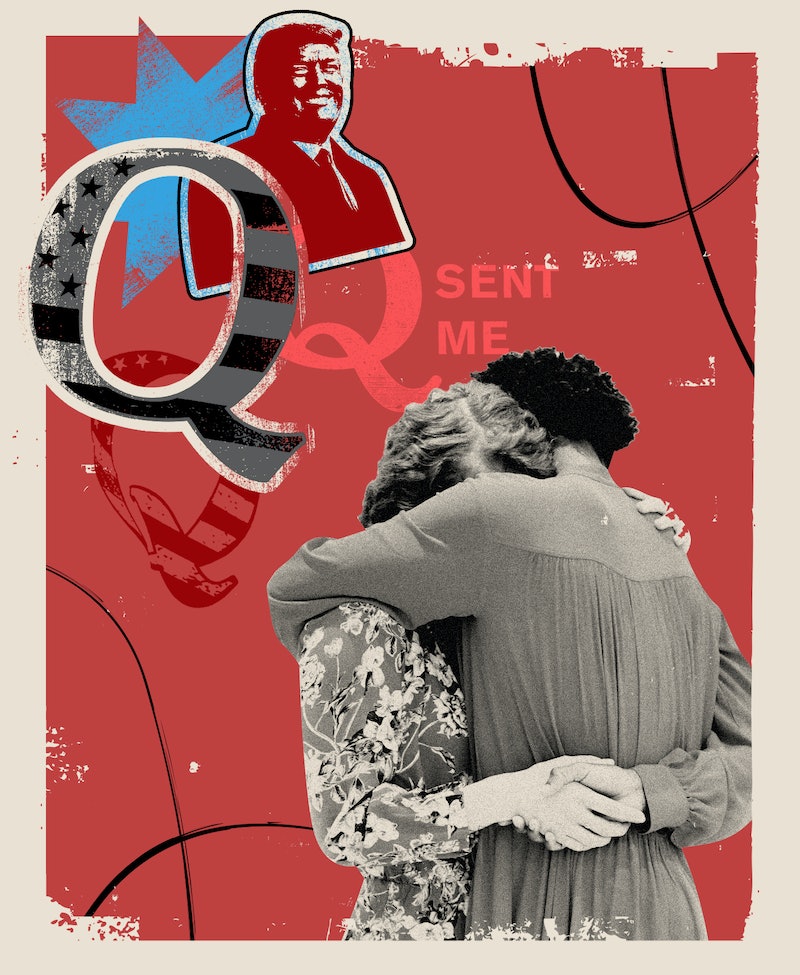 Kim knew QAnon was going to be big. It was 2017, and the first whispers of the knot of conspiracy theories that make up QAnon were gaining traction on sites like Reddit, 4chan, and YouTube. Anonymous authors claiming to have high-level or ‘Q’ security clearance shared outlandish intel: that deep-state Satan-worshippers had infiltrated the government, and then-President Donald Trump was going to expose these pedophiles and cannibals and save the country.

“One evening we were sitting in the kitchen having dinner and he showed me something on his phone and said, ‘I just want you to look at this,’” Kim tells Bustle. It was a post claiming that Hillary Clinton was running a sex trafficking, baby-eating ring in a pizzeria, she recalls. “I remember — so distinctly — picking up his phone and actually throwing it. ‘This is absolutely the most disgusting, horrific thing,’ I said. ‘Please tell me you don't believe in this.’”

Tracking exactly how many ardent followers QAnon has is difficult, but belief seems to be growing — or at least, surfacing. Overall awareness of QAnon among the general public, according to Pew Research Center, grew from 23% in March of 2020 to 47% in September; this mirrors Google Trends data, which shows searches for “QAnon” spiked in March and reached peak popularity in the fall. An Ipsos poll published in December 2020 looking at the actual theories propelled by QAnon — like that COVID-19 was created in a Chinese lab, or that the pizzeria sex ring is real — found that over 40% of Americans believe these false claims. One in three think there’s a secret, unauthorized “deep state” at work within the U.S. government. In the weeks immediately following the Capitol insurrection, Twitter banned over 70,000 QAnon-linked accounts.

As the disinformation swirls, coming to a head in the deadly attack on the Capitol, people with Q supporters in their lives are coming out of the woodwork, begging for help to get their parents, children, or partners back. A scroll through the quickly growing subreddit, r/QAnonCasualties, shows the emotional toll people with Q-supporting loved ones are facing — and have been since the conspiracy’s inception.

Kim’s relationship was never the same after John showed her that post in November 2017, about a year after they first met on a dating site. John became increasingly obsessed with exposing the evil deep state actors QAnon purports are controlling the government, spending more time on Q-supporting message boards in the process. Still, she didn’t think she needed — or wanted — to break it off. Both in their 60s, Kim says the relationship was unlike any she’d ever had. “Both of us just fell head over heels in love with each other.”

When they first met, John had sold himself as a centrist, though over time, Kim realized he was “infatuated” with Trump. But before he came across QAnon claims on Twitter, she says, he hadn’t shown any tendencies towards conspiracies. Their politics may not have aligned perfectly — she had campaigned for Amy Klobuchar in the run-up to the 2020 election — but Kim says he wasn't into “flat earthers or reptile people” and other conspiracies that would raise flags. He was smart, funny, well-read. He had been high up at a local advertising firm and owned his own business.

Research shows people are attracted to conspiracy theories like QAnon based on whether or not psychological needs are being met, says Karen Douglas, a University of Kent professor who studies the psychology of conspiracy thinking. The feeling of needing to know the truth is one example. “The other needs are existential, which are related to the need to feel safe and to have some control over things that are happening, and social, which are related to the need to maintain a positive view of the self and the groups that we belong to.” People latch onto conspiracy theories in an attempt to cope with the uncertainty of life. It’s easier to believe that you, personally, are fighting “evil” — as QAnon supporters do — than to believe things are random and chaotic and there’s nothing you can do about it.

That may be why conspiracy thinking and misinformation seemed to thrive alongside the stress and uncertainty of the pandemic. “They are trying to make sense of a lot of (sometimes confusing) information [and] are trying to cope with difficult circumstances,” Douglas says. Amid the chaos of the last year, QAnon followers might find a sense of order and logic in its labyrinthine web of conspiracy.

Amanda*, in her early 40s, says it was the savior complex that got her husband into QAnon during the pandemic. “It makes him feel like a hero,” she tells Bustle. “He thinks he's involved in something that's going to make the world better.”

When they met in 2007, Amanda says he was a run-of-the-mill Rush Limbaugh-listening, Fox news-watching conservative, while she was a Bernie Sanders-supporting democratic socialist. She learned early on to quiet the part of herself that “bristled at his politics." They got married in 2016, but lockdown triggered a switch in him: not being able to engage in his typical coping mechanisms for stress, he became bored and depressed, Amanda says, and spent more time on YouTube. He’s started to deny COVID as a result of QAnon theories, making her feel more at risk for getting sick. “If I want the vaccine, I'm going to have to sneak it.”

Now, she’s on the cusp of leaving, but doesn’t know how to end it. “I’m afraid that he will truly turn on me and see me as the enemy too, as not patriotic enough or whatever,” she says. “But I married him. I said yes to loving him for the rest of my life. […] I'm not sure that I get to just walk out because he got involved in some weird sh*t.”

“The thought of losing him now for good is the most devastating thing that's ever happened to me in my life."

For Karl*, a Seattle resident in his 30s, the idleness of lockdown also bred the conditions for Q to infect his would-be marriage. “My [fiancée] started obsessively following a series of Q-decoders online,” he says. “We went from going out on Saturdays to our favorite cocktail place, to her being locked away in her room decoding the latest messages on Discord servers.” Karl used Reddit to go directly after the QAnon leaders that his fiancée was obsessing over, attempting to expose them and their fraud and hoping she’d come across his posts. When he showed her what he had been doing in October 2020, the nearly five-year, on-and-off relationship was over. “She went completely ballistic and called off our engagement on the spot,” he says.

Kim, similarly, tried to find undeniable evidence to debunk QAnon for John. It didn’t work. “When you get into a conversation with someone who believes strongly in a conspiracy theory, it is quite difficult to change their mind, or even to keep up with the discussion because they are always one step ahead,” Douglas says, noting that it’s very easy to alienate people and push them further into their beliefs if they’re challenged too aggressively.

While the marriages they’d planned are no longer on the table, Kim and Karl still hope it’s not too late for their ex partners to get over QAnon. The Sunday after Joe Biden’s election victory in November, John told Kim that he’d backed away from QAnon, that betting on Trump in the first place had been a “gamble.” They talked about moving back in together, and working towards marriage. For a moment, it seemed like Kim had gotten her partner back. Then, the Capitol siege happened. John pushed the narrative that Antifa was behind the attack, despite reports that many insurrectionists were QAnon supporters. “We argued, and decided to stay apart until things calmed down a bit,” Kim says.

Karl and his ex have started talking again, but talking politics is off limits. “Perhaps ... when we finally talk about this madness again, it might just mark the end of our relationship.”

Partners of so-called QAnon casualties stress the same feeling: that their partners, their relationships, and their lives have been hijacked by the conspiracy. And the severity seems to ebb and flow along with the news cycle. “The thought of losing him now for good is the most devastating thing that's ever happened to me in my life,” Kim told me in early February, when she and John were on the outs, but she was hopeful. After Trump’s second impeachment began, her feelings changed. The attack on Trump brought out the familiar, Q-fueled aggression that had upended Kim’s relationship. “We have not spoken since,” she wrote in an email. “I’m done. I can’t handle his extreme mood swings and the way he now speaks to me. It’s sad, all over again.”

More like this
Why We Love Investigating Friendship Breakups
By Carolyn Steber
Why Being “Too Sensitive” In Relationships Is A Good Thing
By Lexi Inks
How Ovulation Affects Your Sense Of Smell, Libido, & More
By JR Thorpe and Lexi Inks
Are Those Under-Desk Treadmills Actually Worth It?
By Carolyn Steber
Get Even More From Bustle — Sign Up For The Newsletter
From hair trends to relationship advice, our daily newsletter has everything you need to sound like a person who’s on TikTok, even if you aren’t.