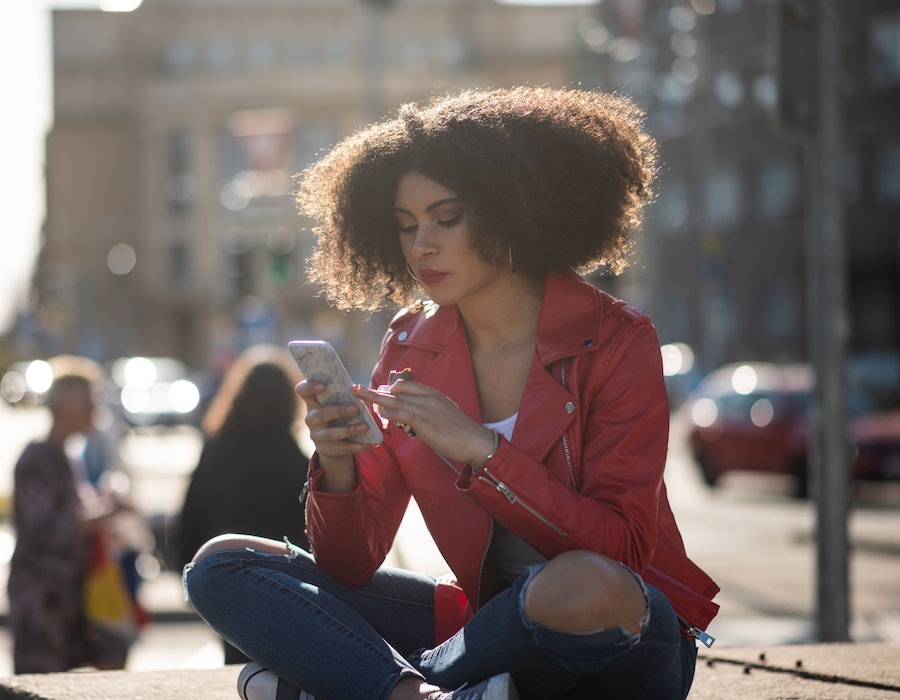 Autumn, 23, was unwinding after a long day of work when her phone beeped — it was a new message notification from Tinder.

"I’m ready to dip into some chocolate. Is it true that once you go Black you never go back?"

From overtly sexual messages to microaggressions disguised as compliments, dealing with racial fetishization on dating apps has become a large part of dating for Black women like Autumn, and many other people of color. But as dating apps continue to surge in popularity, fighting racism within dating means understanding how both users and popular app technology contribute to discrimination.

As Dr. Reuben J. Thomas, associate professor of sociology at the University of New Mexico notes, the rise of online dating coincides with the rise of interracial and interreligious couples in the U.S. "It's a sad irony that the venue that is perhaps most responsible for creating interracial couples these days is also the venue where members of racial minority groups are likely to experience romantic racial discrimination," Dr. Thomas tells Bustle. "But this can often be a consequence of increasing intergroup contact — it can increase both positive and negative interactions."

"Because so many people live in a bubble, dating apps are the first time they have the opportunity to speak to people who don't look like them," Autumn tells Bustle. "Dating apps have allowed people who are blatantly racist to run wild, but have also allowed people to further perpetuate racism under the guise of 'exploring something more exotic.'"

Unlike other types of discrimination, fetishization capitalizes on the idea of "positive bias" by positioning someone's race, body size, gender, or another attribute as something to be sought after. For Ivanna C. Rodriguez-Rojas, 21, a Cuban-Mexican artist and author of Fetishization for Dummies: Columbia Edition, being fetishized feels like "your existence is seen as a trivial yet alluring prize, or worse, something that needs to be saved and conquered."

"I often get fetishized because men think I am a docile, submissive Asian woman because of stereotypes," Tiffany, 29, a Chinese-American publicist, tells Bustle, adding that she typically gets ghosted after dates see that's not her personality.

"You immediately feel like you are no longer a personality — you are just a thing," Megan, 29, an Irish and Latina digital content creator and fat activist, tells Bustle.

Are "Preferences" The Problem?

Jessie G. Taft, a research initiative coordinator at Cornell Tech and co-author of a 2018 study on bias on dating apps says racial discrimination in dating can be disguised as having "preferences." But the question of what constitutes a "preference" is loaded.

In an ideal world, daters would better understand the formation of their "preferences." But Taft's research suggests that users tend to swipe for specific characteristics without taking time to examine why.

OkCupid addressed its feature in a statement on June 2 saying, "Most of our users do not set a preference, however, from user feedback, we’ve heard that this is a particularly relevant tool for Black users in the U.S. and globally, creating a more diverse and inclusive community on OkCupid."

A spokesperson for Hinge agrees that ethnicity filters benefit Black, Indigenous, and people of color (BIPOC) users, telling Bustle, "We created the ethnicity preference option to support people of color looking to find a partner with shared cultural experiences and background."

However, Dr. Keon West, a social psychologist and author of a 2019 paper on racial biases in casual sex versus committed relationships says racial filters don't help people of color. "Among white people, there is a clear, large preference for other white people, particularly for committed relationships," Dr. West tells Bustle. "I understand the argument that some ethnic minorities might prefer to only date members of their own race due to shared experiences of racism/discrimination, but the data shows that that's not what happens in real life. In real life, ethnic minorities are more open to dating interracially, and white people are less so."

Dr. West notes that users can still bring racial biases into dating without filters, filters allow apps to "enable, streamline, and condone [discriminatory] behavior." Yet, according to Heather Hopkins, founder and CEO of video dating app GOATdate, even when dating apps don't allow for racial filtering, their algorithms may be part of the problem.

Taft's study reported that on dating apps, white people are more likely to message and ask out other white people and are the least likely to date outside of their race. As Dr. West found in his research, "Ethnic minorities are seen as less desirable overall and particularly less desirable for committed relationships versus casual sex."

Being seen as a potential hookup, rather than a potential partner fortifies problematic ideas that people of color are an "experience" or "type."

Rodriguez-Rojas shares that via online interactions, the over-sexualization of people of color is more common and condoned, as there's less accountability than with in-person dating.

"The internet provides a level of safety for harassers since they know their actions will probably not have negative consequences (for them, at least)," Rodriguez-Rojas says.

Cheyenne, 25, a Black writer and content creator, agrees, telling Bustle that dating app users are more brazen with their racial biases and fatphobia because they're not facing you in person.

"Dating apps let these men say whatever, and then there are no consequences," Cheyenne tells Bustle. "People are going to continue to act mean and inconsiderate because [the apps] are not checking them."

What Dating Apps & Users Can Do To Combat Fetishization & Racism

Autumn, Megan, Cheyenne, and Tiffany have all unmatched, blocked, and reported fetishizing or discriminatory dating app messages. Yet, they all share feeling in the lurch about any actions taken against the fetishizers. Sometimes they see the same users they've reported again.

"It's not about me at this point, it's about other women," Cheyenne says "Because if he's treating me this way, he's damn sure treating everyone else the same way."

A Bumble representative tells Bustle that while every report is reviewed as soon as possible unless the report is "related to a severe situation," they're typically unable to update users on the status of their reports. "At a minimum, the person’s profile will be blocked, and if necessary, the person will be banned from using Bumble," the representative says.

But experts believe the responsibility for combatting racism on dating apps falls on both users and apps — individuals must confront their "preferences," and apps need to create a space that fosters racial equity.

Taft suggests that apps use their data to create optimized anti-racist resources and mandatory readings for users about how dating preferences are formed. Hopkins believes that all dating apps should remove their race and ethnicity features and combat any covert racism in their algorithms. Tiffany proposes removing pictures entirely, pointing to the popularity of shows like Love Is Blind, while Autumn encourages users to be more holistic in their swiping.

"This idea of, 'just put yourself out there, you'll meet people!' — that is a story for a white woman," Autumn says. "Dating apps are constantly narrowing people down. There's not even the opportunity to consider where love could exist because everything is so methodical."

Dr. Keon West, a social psychologist and author of the 2019 study, Interethnic Bias in Willingness to Engage in Casual Sex Versus Committed Relationships,

More like this
30 Clever Ways To Slide Into Your Crush's DMs
By Griffin Wynne, Carolyn Steber and Lexi Inks
Hinge Added A Video Prompt Feature, So Get Your Camera Rolling
By Hannah Orenstein
Are Quality Time & Gift-Receiving Love Languages Compatible?
By Lexi Inks
Breeding Kinks Have Been On The Rise Since Roe V. Wade Got Overturned
By Lexi Inks
Get Even More From Bustle — Sign Up For The Newsletter