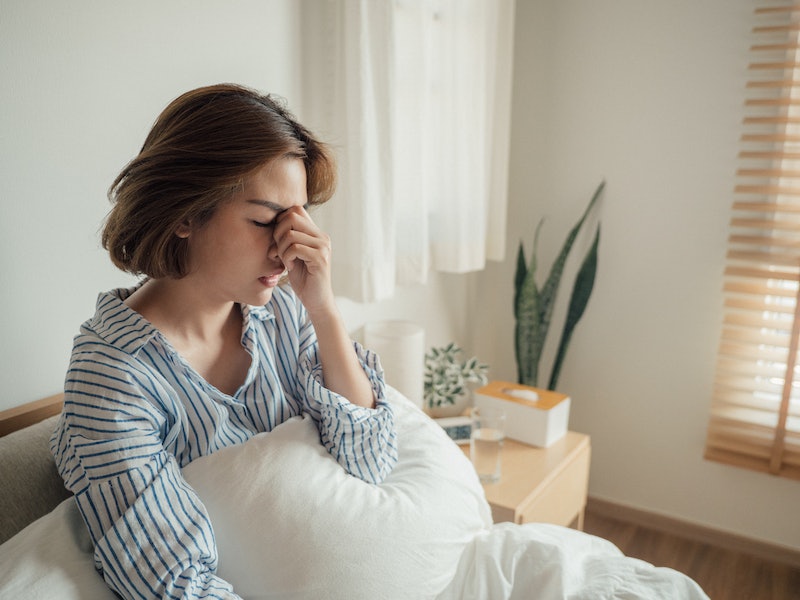 Rae* thinks she contracted coronavirus the first week of March while at a work conference. The 32-year old, Washington, D.C.-based attorney started running a daily fever and had shortness of breath so intense that it landed her in the emergency room twice. Since coronavirus testing wasn't widespread in March, her case was presumed positive. She was sick for around 28 days, and though she still had some lingering fatigue, she and her doctor basically thought she’d recovered.

Then, throughout May and early June, Rae would try to do some yoga, or walk for a half hour — a light version of her pre-COVID workouts. Each time she tried, she became so exhausted, she couldn’t get out of bed for days at a time and her temperature would rise again. As June progressed, Rae developed rashes over her face and neck, along with a daily fever — a symptom Rae hadn’t experienced since the first week of April. She’s had a fever every day since, and while she’s tested negative for both COVID and antibodies after her symptoms re-emerged, her doctors still label her a presumed COVID case.

Now, she’s seeing doctors about testing to rule out any autoimmune conditions that could be behind her new symptoms. “I’m pretty sure that will come back negative,” she says. She fears she’ll “just be stuck with this forever and hear, ‘Well, you probably had COVID in early March — good luck.’”

Rae’s is a situation that many COVID survivors are familiar with — having seemingly recovered from COVID, only to have recurring symptoms months later. In Italy, researchers found that almost 90% of COVID patients exhibited symptoms after apparently recovering from the coronavirus. At a July news conference organized by the International AIDS Society, Dr. Anthony Fauci, the director of the National Institute of Allergies and Infections Diseases (NIAID), said there “may well be a post-viral syndrome associated with COVID-19,” while other researchers have raised the alarm about a potential spike in ME/CFS diagnoses, as was seen after the 2003 SARS epidemic. (ME/CFS, sometimes known as chronic fatigue syndrome, is thought to be triggered by viral infections.)

With so much about COVID still to be researched, patients are left to unravel their own medical mysteries — and advocate for themselves when doctors say they’re “healed.”

Dr. Dona Kim Murphey, MD, PhD, is a neurologist who developed a mild COVID case back in March, recovered by mid-April, and began dealing with recurrent symptoms in mid-May. While she had two negative COVID tests, in early April and September, she's also presumed positive by her doctors. The 41-year-old Texan experienced an eyelid rash and vision changes, which her doctors attributed to an infection that went away with antibiotics. After that, she felt like she had about 80% of her normal cognitive functioning. New neuropsychological symptoms emerged by the end of July: problems with short-term memory, expressive language errors, extreme depression, and alien hand syndrome, a condition linked to tumors, aneurysm, or stroke. “You feel like your left hand doesn’t belong to you, that it’s moving seemingly by itself,” Kim Murphey says. She was able to recognize it as a symptom because of her neurology training, though she doesn’t treat patients with neurological symptoms of COVID.

When COVID first hit the U.S., Kim Murphey immediately noticed initial studies emerging reporting neurological symptoms and was concerned, both for herself and for others with COVID. “This has long-lasting implications for anyone who gets it and their brain,” she says. Months later, she is overwhelmed by how many people with COVID or who had COVID self-report neurological symptoms online.

“Just today I saw someone post about having transient smells — this is a classical symptom of encephalitis [inflammation of the brain],” she says. “Hopefully our bodies are just trying to fight off infection and post-infection inflammation and it will go away, but it worries me.” Evidence is emerging that many people who survive COVID go on to have medium-term if not long-term consequences of this infection. “If that involves the brain, that’s a huge problem.”

“All I want to do these days is sleep.”

In August, Kim Murphey began taking fish oil and vitamin D supplements and started an anti-inflammatory diet, which she says has dramatically improved her symptoms. But not everyone has been able to find relief. On top of dealing with lingering symptoms, COVID survivors are often expected to resume life as “normal” after testing negative, even though they’re still dealing with pain, fatigue, or other strange signs.

Tiffany St. Onge, 30, was diagnosed with COVID-19 after a positive test on May 6. Her first symptoms were shortness of breath and tremors that began in her legs, and spread through her body. The Rhode Island resident had intense gastrointestinal symptoms and ran a daily, low-grade fever, going on to be sick for nearly two straight months. Her tremors, sore throat, fever, and diarrhea continued, and anxiety, brain fog, and confusion began as her illness went on.

After testing negative on June 30, when her fevers stopped, she returned to work on July 2. Then in September, she began dealing with extreme hair loss, and says her previous, once-resolved symptoms now come and go, almost at random. “It does make me wonder if it’ll ever finally go away for good,” she says. She no longer feels like herself, and feels depressed as a result. “All I want to do these days is sleep.”

In 2006, a team of Canadian researchers found that longer periods of recurrence are not unusual after severe viral infections, though there’s no one special “trigger” that might spark new or recurrent symptoms. For now, researchers believe that patients who re-test positive don’t continue to spread the virus, an encouraging sign for containing the pandemic. But patients wish this after-effect of COVID, which many clinicians suspect will happen to a significant number of COVID survivors, were a bigger part of the national conversation about preventing the spread of the virus.

“We’re talking about death in terms of COVID, and that’s obviously a serious thing,” Kim Murphey says. But she wonders why survivors’ disability doesn’t get more attention. “Very large numbers of people in the United States are now having to live with profound, long-term disability.”

Further exacerbating the situation, she says, is the fact that so many survivors who are having these new symptoms — which they intuitively believe to be linked to COVID — find themselves dismissed by their healthcare providers.

“People who feel that these people are imagining these things, are telling them that it’s all in their head — well, yes. That’s precisely right. This virus is in your brain,” Kim Murphey says. “We need to take this seriously.”