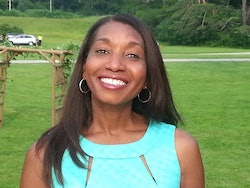 Lilly Marcelin had devoted over two decades of her career to ending gender-based violence and human trafficking when she noticed a common thread among many of the women she worked with: They were dealing with health issues that only affected women, but didn't feel they could seek help for them.

“One day, I was talking to a client who had a lump growing in her left breast, but she didn’t want to seek medical care because of some complicated issues with immigration,” Marcelin tells Bustle. “It took six to eight months of convincing her that she would be safe if she went to the doctor. It turned out to be a cyst, but after that incident, I wanted to probe a little bit into reproductive diseases in general. So I started talking to family and friends, hosting circles of women at my house on Saturday mornings to talk about the issues they were facing.”

Those transparent and vulnerable conversations led Marcelin to start The Resilient Sisterhood Project, a Boston-based organization dedicated to educating and empowering Black women about reproductive health issues. The nonprofit, of which Marcelin is the executive director, offers programs designed to raise awareness of a wide range of reproductive diseases, including uterine fibroids, endometriosis, polycystic ovary syndrome (PCOS), and breast, cervical, endometrial, and cervical cancers.

“We have a core educational program to provide outreach, education, and training to Black women and allies and tackle issues of equitable access to reproductive health care,” explains Marcelin. “There is a strong emphasis on informing women about health advocacy and discussing the importance of timely diagnosis and timely treatment, in addition to addressing the chronic stress that racism can have on your reproductive health and maternal health.”

According to a 2021 study published in the journal Obstetrics & Gynecology, racial and ethnic disparities in reproductive health services — such as the fact that fibroids affect Black women three times more than white women — are the result of social and structural factors, including fewer neighborhood health services, less insurance coverage, and even racial bias and stereotyping from practitioners. This is why Marcelin believes reproductive health is ultimately a social justice issue.

“You can’t just look at reproductive issues through a myopic lens,” she says. “It’s really important that we take a more expansive look at understanding these diseases.” For Marcelin, doing so begins in the communities most affected by these diseases.

“So many of the women I talked to had the same question, ‘Why don’t we talk about reproductive health? Why is there so much silence and secrecy?’” Marcelin recalls, of the original conversations that informed the founding of The Resilient Sisterhood Project. “I started thinking about how we have not been conditioned to prioritize our reproductive health. This wasn’t a topic we spoke about with ease — reproductive health was often thought of or characterized in terms of maternal health and motherhood. Any talk of a particular disease of the reproductive tract was done through an aspect of limited knowledge.”

If reproductive health was ever discussed in the communities Marcelin was working with, it was in the context of abortion or sexually transmitted infections. While she recognizes the importance of talking about these health issues, she also felt like "conversations were largely led by politicians and conservative groups that don’t have our reproductive well-being in mind.” She says she also felt these issues were being used to marginalize and stigmatize Black women, leading them to stay silent about the health issues that are affecting them.

While Marcelin recognizes that the health care system has a long way to go, she is optimistic that the country is making strides. “I recognize that starting The Resilient Sisterhood Project is not going to solve the reproductive health crisis faced by Black women in this country,” Marcelin says. “On the other hand, I feel a moral obligation to do what I can with the support of anyone who wants to join me in that endeavor. I’m glad I started this organization and give deep gratitude every day for such blessings.”

More like this
How Ovulation Affects Your Sense Of Smell, Libido, & More
By JR Thorpe and Lexi Inks
How Many Burpees Should You Do Per Day? Here’s What Fitness Trainers Say
By Carolyn Steber
The 11 Benefits Of Aerial Yoga, According To Trainers
By Carolyn Steber
All The Reasons Your Gums Bleed When Brushing Your Teeth
By Carolyn Steber
Get Even More From Bustle — Sign Up For The Newsletter
From hair trends to relationship advice, our daily newsletter has everything you need to sound like a person who’s on TikTok, even if you aren’t.