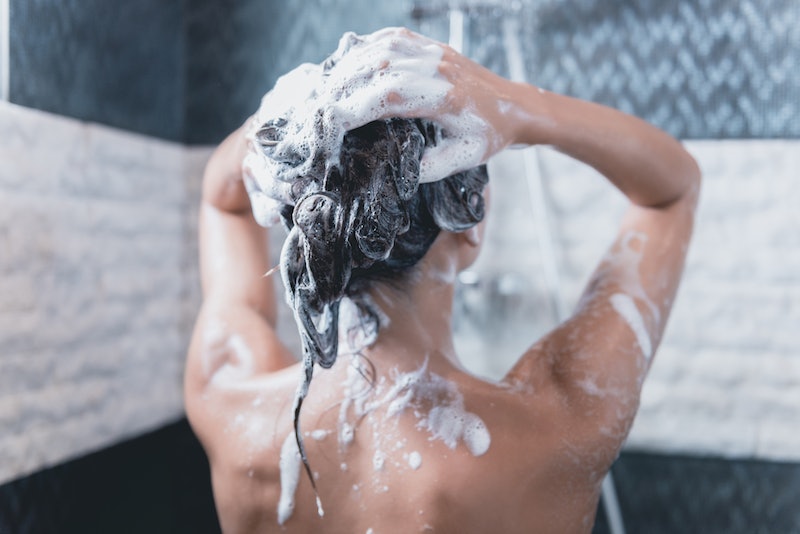 TikTok might be best known as a place to showcase dance moves or DIY home renovations, but it's also become a space for vital conversations about mental health. Recently, Gen Z-ers have been opening up about depression with seemingly innocuous phrases like “I finished my shampoo and conditioner at the same time” or “I ate pasta tonight.” The phrases come from a poem by Hannah Dains, titled “Don’t Kill Yourself Today.” Gen Z-ers have co-opted these lines to express feelings of depression, anxiety, or suicidality in videos that have garnered millions of views.

According to a 2019 study published by the American Psychological Association, 91% of Gen Z-ers report having experienced one physical or emotional symptom of stress or depression, and are more likely to say their mental health is fair or poor. But they're also the generation most likely to report that they have reached out for mental health support. While "I ate pasta tonight" might not sound like an obvious call for help, some TikTokers have decoded these hashtags to support other users.

Rhianne, 20, was only on TikTok for a few days before mental health content filled up her For You page, especially #shampooandcondistioner posts. She was just beginning to recover from an eating disorder when she joined the app in June, and some of the posts showing up on her feed from interacting with similar hashtags worried her. “I found some of the videos very toxic. It would be unfair to say that’s what sent me into a relapse, but it definitely played a part,” she says. Because her mental health was already vulnerable, she avoided posting her own video. But after a disagreement with friends IRL, and a night of “spiraling down with no one to talk to,” she decided to make her own #shampooandconditioner confession. “I had seen all the other videos receive comments from people trying to help and wanting to listen,” she says. Immediately she felt “a weight lifted.” She says it was a massive relief to share her feelings. “I think I just needed a reminder from someone other than myself that things do get better, and to remind me of all the reasons to carry on.”

People posting about mental health issues on TikTok are trying to share their story and connect with others. And while TikTok might offer a generally safe space to open up, the behavior is “also likely a clear communication that they need help,” says Amy Jane Griffiths, Ph.D, N.C.S.P., licensed psychologist and assistant professor of clinical counseling at Chapman University.

To Candice Biernesser, Ph.D, a researcher with the University of Pittsburgh's ETUDES Center, social media practices among people struggling with depression or suicidal thoughts are neither inherently good nor bad. “In some ways it is really positive, especially when it works to de-stigmatize mental health issues and help people make powerful connections to the community.Teens naturally relate to peers over adults, so having the ability to speak about your story among people your age is really important,” she says.

But there are risks, too. "The issue with this behavior is that the internet is not always a safe place to express your struggles and needs,” Biernesser says. Trolls are not above spreading hateful or discouraging messages on suicidal content, and a negative comment directed at someone struggling with depression can be damaging. Additionally, depending on how someone feels while scrolling through the app, “watching these videos may be triggering for those considering suicide and may lead to suicidal thoughts and behaviors.” Though most of the comments on Rhianne's video were positive, she says that one suggested that the video was triggering to that user, similar to how Rhianne had felt triggered by eating disorder recovery videos.

One of Biernesser's greatest concerns is the fact that while receiving validation and support on TikTok can make someone feel better in the immediate sense, many people need long-term professional support. Further, especially given how teens are susceptible to peer pressure, she points out that not receiving likes or comments on these videos could negatively impact their self esteem, "comparing themselves to other creators who received thousands of hearts or comments." Right now, TikTok doesn’t have the infrastructure to check on each creator to make sure they’re getting assistance, though it prompts users who search for content about suicide, eating disorders, and more to seek help in-app. TikTok's community guidelines state, "We do not allow content that promotes self-harm or suicide, but we do allow our users to share their experiences in order to raise awareness about these issues."

While TikTok's guidelines leave room for supportive content for people struggling with suicidal thoughts, Biernesser says that "sometimes the online community can overly normalize suicidal behavior instead of offering guidance." Because this video style is now trending, the format can be seen as a template for making content, rather than a serious call for help.

Despite the negative potential, Rhianne is grateful for the outlet. “The community is so supportive and all these strangers come together to make sure everyone's doing OK and it is so heartwarming to see,” she says, adding that she relies on that support in addition to seeing three therapists offline. To Rhianne, social media is a supplement for IRL expression. “Strangely, I have found that TikTok has made talking to my therapists easier because I can show them videos that explain how I'm feeling as I'm so bad with words."

As a viewer, the most responsible way to consume this content is to engage, according to both experts, especially if you come across a video that doesn’t have a lot of support. “I suggest reaching out to these people when you see posts, privately,” Biernesser says, adding that simply asking how they are doing or sharing a resource like Crisis Text Line can be helpful. “These people could be operating from a place of isolation and they might not have anyone in their personal lives to reach out to,” she adds. Griffiths says that it’s crucial that “we always take these communications seriously – no matter what the person hopes to gain from their post,” and remember that offering support is the best thing to do.

Candice Biernesser, Ph.D, a researcher with the University of Pittsburgh's ETUDES Center,

More like this
Why We Love Investigating Friendship Breakups
By Carolyn Steber
Ashamed Of Your Screen Time Stats? Here's How To Change That
By Alexis Morillo
How To Turn Off TikTok Profile Views So You Can Stalk Other Accounts In Secret
By Alexis Morillo
10 Primal Movement Exercises That'll Improve Your Mobility
By Carolyn Steber
Get Even More From Bustle — Sign Up For The Newsletter
From hair trends to relationship advice, our daily newsletter has everything you need to sound like a person who’s on TikTok, even if you aren’t.