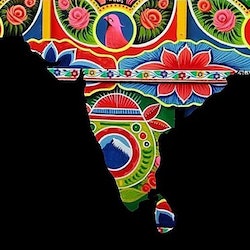 Sunrise Radio, London Mela and Sakonis: three cornerstones of my life as a British South Asian, growing up in the capital. Many may not know what these are – an Asian news network, a joyous day festival, and a legendary vegetarian eatery – but, for me, they reflect the rich essence of British Asian culture that is currently being celebrated during South Asian Heritage Month (July 18 to August 17).

“There are over three million people of South Asian heritage in the UK, or in other words, one in every 20 people who live in the UK are of South Asian heritage,” co-founders of the festival, Dr Binita Kane and Jasvir Singh OBE tell me. So, it makes sense that the House of Commons announced South Asian Heritage Month to celebrate a culture that had previously been without a national event. Festival collaborator, TV presenter Anita Rani agrees with Kane and Singh on the fact that it’s long overdue. “It’s part of British history,” she says. Why then, does South Asian heritage still feel relatively unexplored?

Intended as “a time to celebrate, commemorate and educate”, the festival includes an assortment of virtual events supported by the Manchester Museum, exploring talking points from art to food, literature, fashion, and wellbeing.

As a second-generation immigrant, with parents hailing from Kolkata in India, growing up in London felt like leading a double life. On the one hand, there were weekends packed with large gatherings (a distant memory now!), and regular shopping sprees to Ealing Road, forever searching for the best chilli paneer. At the same time, I was at a Catholic high school, navigating MSN Messenger politics amongst other millennial rights of passage. All set to the soundtrack of the Himalayan Carpets advert (via Sunrise radio, of course), usually driving along in my dad’s Clio.

“If you have ever done yoga, cooked a curry, or worn a bindi at a festival… then I think South Asian Heritage Month is for you,” Rani says in her Instagram post, announcing the festival. The official launch video features a poem titled I have a question by Hussain Manawer, a poet and mental health campaigner from Essex. For many British South Asians, identity is always up for discussion – one of the questions Manawer asks is: “Why is my name so hard to pronounce?” (A relatable one for me, as rogue ‘i’s and ‘n’s often find their way into others’ attempts at my six-letter name.)

Unpicking trickier issues of fairness and colourism, mental health and cultural expectations are also part of British Asian identity. For South Asian Heritage Month, I have been working on a podcast, Roots to Routes, that explores how this shared heritage has informed the paths of fellow British South Asians shaping the creative industry.

In the first episode, I learned a little more about my co-presenter and friend, photographer Taran Wilkhu’s identity crisis. Born and brought up in Yorkshire to a big South Asian family, Taran shares his story of introducing his white partner to his mother: “She just could not accept it, it was a really emotional time.” In response, he decided to go to India to learn more about his roots, to try to better understand his parents’ perspective. In the end, it was his grandmother who gave the green light on his relationship – and the mixed heritage family are now a very happy one. It’s a story that many in the diaspora might relate to, and highlights the fact that while we’re learning to combine our double lives, our parents' generation are still figuring it out, too.

This just touches the surface of the stories that are ready to be heard. When filming the BBC documentary My family, Partition and Me: India 1947 (which featured four families, including Kane’s and Rani’s) Kane said: “No-one told me that my history mattered, it felt like this part of history was surrounded by a wall of silence for over 70 years.” Brick by brick, South Asian Heritage Month is dismantling walls by amplifying these stories – and they invite you to be part of it.

More like this
Jess & Anya Are The High School Sweethearts Who Gave Love A Second Chance
By Jessica Morgan
The UK Abortion Laws In 2022, Explained
By Sophie McEvoy
Boris Johnson’s Leadership Is In Question – Again
By Bustle UK
Windrush Victims Are Still Waiting For Compensation
By Sam Ramsden
Get The Very Best Of Bustle/UK