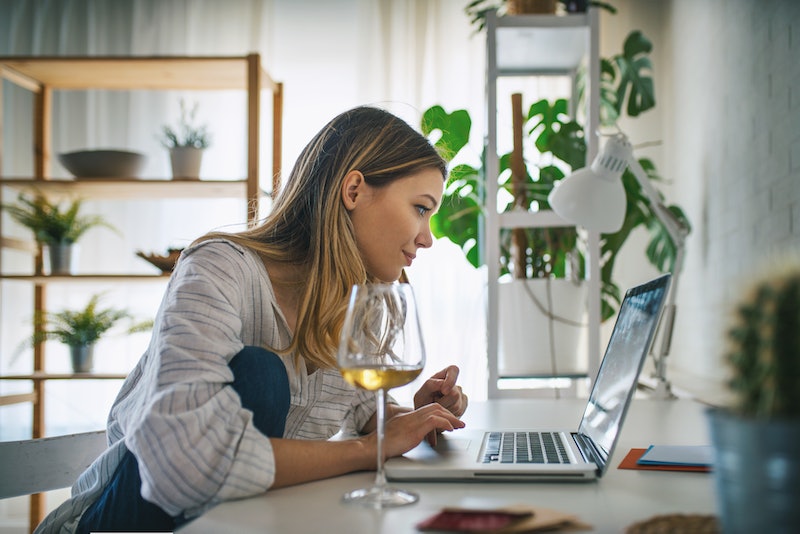 Back in the '90s, talking to strangers online was a thrilling, novel, and low-key scary way to connect with others. Exploring chatrooms with friends at a sleepover was the forbidden fruit of the '00s. But as we evolved to Instant Messenger, text message, then DM, we lost a fundamental element of the AOL experience: talking to strangers.

Since the beginning of quarantine, I have found myself attempting to make friends in all corners of my digital reach, from my period-tracking app's message boards to the comment section of a YouTube video. My time in isolation has given me a surprising confidence and curiosity in speaking with strangers because it feels like a safe space to be unapologetically honest.

My experience is not unique. Facebook confirms there's been a burst of engagement on Groups, a prime location for strangers with overlapping interests to mingle. Since the start of the pandemic, groups like Parenting Under Quarantine grew from 25 members to over 28,000 members, and Solo Female Vanlife, a once-small group for alternative travel now has over 26,000 women from diverse backgrounds and experiences chatting away. And video chat apps like Omegle and Chatroulette, which had seemingly gone extinct before the pandemic, have been maxed out with new traffic, too. So while your group chat might be more active than ever, people are also seeking social connection outside of their existing circles, even if they're not talking about it.

Psychotherapist Kate Ecke, L.C.S.W., attributes the increased desire for unfamiliar connections to collective trauma. "The pandemic has forced us to seek that connection in unconventional ways," she says. The fact that we have a shared experience makes going into a conversation with someone we don't know immediately less ambiguous. "The slight anonymity that people are finding online is giving them the ability to be authentic without the fear of rejection," she says. "People know they can simply leave the chat, delete the app, and move on like it didn’t happen — if we overshare, there aren’t any real world consequences."

People Are Exploring Themselves Online

Ecke says that for many people, time spent in quarantine inspired personal reflection regarding values and priorities. Sometimes these changes can be hard to talk about with people we are close with, and talking to strangers online allows us to explore these new sides of ourselves. "We get to try out these new personas on someone who won’t judge us," she says.

According to family therapist Dawn Friedman, M.S.E.d., the increased desire to connect with strangers online might also be rooted in escapism. "We get to be somebody different with strangers, and we want things to be different right now," she says. "Talking to someone who lives far away or who's doing something totally different in their lives can feel a little bit like a vacation." Friedman says that people have their guards down right now because they feel a sense of togetherness, despite being alone — which can lead to meaningful conversations and connections online.

Friedman adds that she continues to hear from her clients on a regular basis that despite states opening back up and restrictions on social gatherings lifting, they are still feeling profoundly lonely. "People also feel defensive about whatever choices they're making in the pandemic and so some of them don't want to talk to friends — I think that may be another reason why people are reaching out to people they don't know," she says. By opening up your social circle to the internet, you can curate the kinds of interactions you have. "Socializing online gives you the ability to choose like-minded people to talk to and have control over the kinds of conversations you get involved in," Friedman adds.

While mental health experts agree that making friends online can serve as a crucial social supplement during this isolating time, it can also be a progressive way for people to get to know themselves better. Talking to new people with a veil of privacy allows people to explore parts of themselves that they might otherwise not be open to looking at. "What do we have to lose? We won't be meeting in person," Friedman says, pointing to the security people get from knowing they won't have to look their new online friends in the eye.

Cybersecurity expert Kristina Podnar says there are risks that come with opening up online. Part of the reason why AOL chatrooms disappeared in the first place was because they were hard to moderate, Podnar explains. And while the traditional AOL chatroom model might not be able to compete against social media giants now, Podnar says people will continue to find ways to talk to strangers online. But talking to people you don't know can lead to deceptive interactions, too. "There is something very tempting for individuals to be able to connect, for a short period of time, around a particular interest or aspect of life, without going into too much emotional investment," she says. So as this behavior continues to trend, it's important to be aware of the risks.

Podnar says to watch out for people who ask you for information about you or your family. A hacker may trick you into giving personal details by asking things like "how is your mom – what’s her name again – doing?” This info can then be used to hack into your bank account or access other sensitive data. Podnar also says to be careful about sharing images or sexting with strangers, as blackmail is often used by hackers, too. And there's also the threat of accidentally getting involved in a scam. It is important for users to understand that not everyone has good intentions in this context and to remain alert."

As long as you remember that the internet is not an inherently safe place, it's OK to explore a little. Ecke says socializing online is the antidote to loneliness beyond the pandemic. "We feel less alone when someone echoes our own feelings," she says.