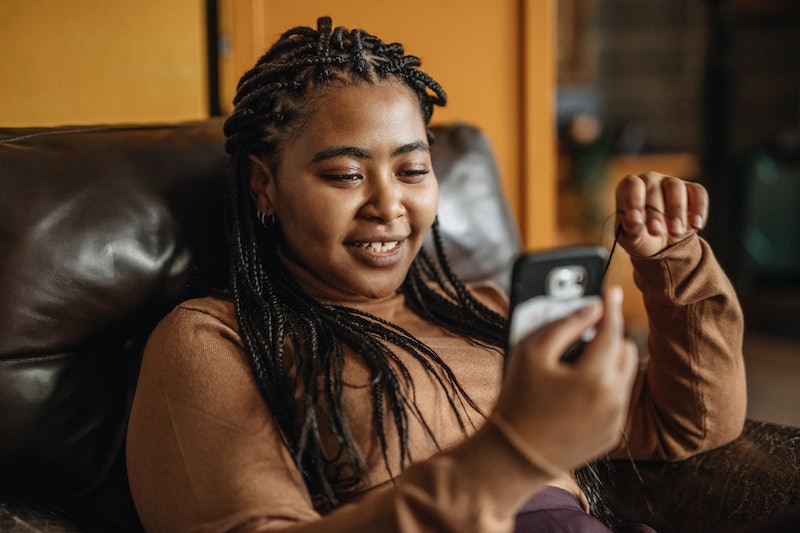 If you’ve ever wished you could guarantee a first date be quick, cheap, and from the comfort of your couch — you’re in luck. Teleport, a new video-first dating app launched this summer, offering five minute invite-only “microdates” with people who share common interests, passions, or beliefs. It’s like Clubhouse for speed-dating, boasting none of the trite bios, unanswered “Hey” messages, or shirtless fish pics you might find on traditional swipe dating apps.

“We believe the best encounters are face-to-face when you can see someone's smile, hear their voice, feel their presence and energy, swiping right will just never replace that magic,” Goodman tells Bustle. “We designed an online dating experience that's inspired by the real world, its live and in the moment. You go on real dates, with real people — on video.”

Though he’s only 25, Goodman has been building dating apps for six years. “I wanted to create an experience online that buries the inauthenticity of swiping, scrolling, fake profiles, and endless texting,” Goodman says. “I had been a part of the problem of creating it, and I knew exactly why it was a problem.”

In 2019, the pair came up with the idea for the app, which gives influencers and communities the chance to host their own virtual speed dating events. To use it, you make a profile, then sign up for events that look interesting to you — there’s everything from “Digital Nomads” to “Queer and Here NYC.” You can filter events by age, location, and identity. Tickets are around $20, with most of the proceeds going to the groups that are hosting. On the night of the event, you’ll have five, five-minute video chat dates with others at the event who fit the location, age, and gender(s) you’re looking for. After the five dates, you have the chance to “like” any of the people you spoke with. If you both like each other, you can message within the app to speak more.

While you’re asked to make a profile upon entry, others can’t see your profile until you’ve video chatted at an event. “We’re trying to replace the first date,” Goodman says. “On video, you know instantly when you click with someone. ... It’s a feeling you can only experience face to face.”

Video Dating In The Pandemic

Deeming swipe-culture a product of the pre-COVID internet, Goodman shares that the global shift to remote life has only increased the need for more interactive dating apps.

While smaller startup apps like Teleport are jumping on video-first dating, bigger dating apps like Tinder and Hinge are taking note. In a 2021 Hinge survey, over 50% of Hinge daters reported going on a video date during the pandemic. And 65% reported they plan to continue using virtual first dates before meeting IRL, even after the pandemic.

“Video dates are the new ‘Virtual Vibe Check,’” a representative from Hinge said in a statement. “A simpler, more relaxed way for singles to get to know each other and check chemistry to determine if they want to meet IRL, before taking the time, money and resources to go on an in-person date.”

“I encourage all my clients to video chat before meeting,” Golden tells Bustle. “There’s nothing worse than going straight from messaging to meeting and being disappointed.”

Though larger apps have started to add video chatting features for matches, Zach Schleien, co-founder of Filter Off, a video speed dating app, thinks the future of online dating isn’t FaceTiming after swiping and matching — it’s not swiping and matching in the first place. Teleport is among a number of new video-first startup dating apps like Filter Off, Snack, and Lolly who are are disrupting swiping in the name of a different online dating experience.

Schleien says that video-first dating is a more efficient and authentic way to date. Rather than stress-picking out an outfit, Ubering to a crowded bar you’ve always hated, and spending way too much money on a date that’s a total dud, daters can see each other in real-time, without even leaving their homes.

“Every app has added video, but you’re still in that same old paradigm of swiping. We’ve eliminated the swipe,” Schleien says. “When you’re swiping, you don’t really think there’s another human on the other side. Video dating allows you to connect in a really authentic, genuine, and deep way.”

“On bigger apps, you match, then you’re thrown over to a messaging screen and you have to figure out what to say to each other — it’s not natural,” Kaplan says. “Video dating is a lot more authentic than what you get from imagery.”

Video-first dating apps are also more intentional, Kaplan says. You can’t use pictures that are seven years old or blurry group shots, and it’s harder to lie about your job or height.

“When you’re uploading your five images on a swipe dating app, you’re curating your profile so much,” Kaplan says. “By having the extra barrier, you’re ending up with higher intent people on the app.”

But Goodman says the surge in video dating isn’t a passing fad, it’s the start of a new culture of online dating.

“We’ve seen the power of it, and there's no going back,” Goodman says. “Video is a gateway to live, in the moment, super authentic social experience for the rest of our lives.”

Zach Schleien, co-founder of Filter Off