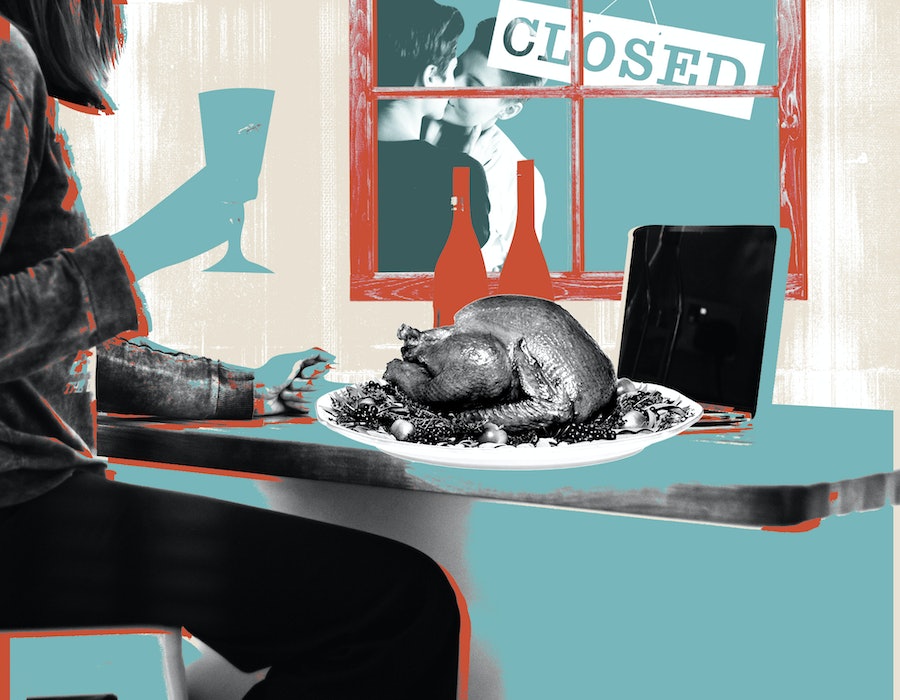 From the time she was 18, Stephanie, 27, has spent every Thanksgiving Eve bar hopping with high school friends and making questionable decisions in her hometown of Wyandotte, Michigan.

“Back in our hometown, the night before Thanksgiving, you can do whatever you want,” she tells Bustle. “It’s always been a tradition to go out and get sh*tfaced.” Stephanie now lives in New York but continues to travel back to Michigan for the holiday season. “Whenever I go home, I make it my mission to stir up as much mischief as I can,” she says. “I’m not a horrible person, but it’s so fun and I get to leave afterward, which means I don’t have to deal with the aftermath.”

An unofficial, beloved holiday, the night before Thanksgiving has been dubbed “Blackout Wednesday” by Midwesterners. You might hear it called “Drinksgiving” — there’s even a movie — or “Skanksgiving,” the implication being that all that reveling can lead to, uh, promiscuity. The occasion is marked by a big going-out night for college-aged kids and 20-somethings who have traveled home for the holidays to catch up with old pals, exes, and the in-betweens, before soaking up the booze the next day over turkey with family. Thanksgiving’s eve is almost like an annual high school reunion, if it were organized by the most rowdy members of your class and held at the kind of establishments where you definitely know people have gotten it on in the bathroom.

Bartenders know it as one of the biggest drinking nights of the year. Restaurant management platform Upserve looked at sales data from more than 10,000 bars and restaurants countrywide and found that profits on Thanksgiving Eve 2019 increased by 31% compared to Wednesday night the week prior. (To add to the debauchery, shot sales were up a whopping 173%.) Young adults flying in from out of town and hoping to regress agree it’s the quintessential night to indulge in hometown hookups. Heavy drinking, sentimentality, and an “anything goes” mentality make the night particularly conducive to taking chances romantically — whether that means rekindling an old flame, deciding to make out with a will-they-won’t-they, or seducing that crush who never noticed you in high school.

“We know it’s going to happen and we’re ready for it, but we don’t plan it.”

One Thanksgiving Eve, Stephanie made plans to meet up with three different guys at three different bars. But when she got to the first bar, Stephanie found all three guys already there together. “They must have been talking. I guess they all found out, so they all showed up at the first bar where I was supposed to meet the first guy,” she says. “But I still made out with one of them and went home with another. The eve of Thanksgiving, all morals go out the window. Traditionally, we are garbage on this night, and it’s OK because everyone else is garbage, too.”

Dani, 25, describes the going out scene on Thanksgiving Eve in her hometown of Fresno, California, as “a recipe to run into ghosts of exes past.” Since you know who will be there every year, you’re bound to mingle with people you’ve hooked up with or dated before, she says.

For Dani, it’s become somewhat of a tradition to go home with the same on-again, off-again ex from high school, even though they don’t keep in touch the rest of the year and have never actually discussed their standing Thanksgiving Eve hookup. “That’s the best part,” she says. “We know it’s going to happen and we’re ready for it, but we don’t plan it.”

Peyton, 23, describes the night before Thanksgiving in Charleston, West Virginia, where she’s from, as a night frozen in time. “Every single year we go to the same row of bars and when you walk in, you recognize someone you know within 10 seconds,” she says. “It’s just the familiarity of knowing everybody when you go in; I’ve never had that feeling anywhere else except on this night.”

But this year, the tradition simply can’t carry on. With COVID-19 cases surging and restrictions tightening across the country, bars in certain cities may not even be open on Thanksgiving Eve. And per the Centers for Disease Control’s holiday guidelines, it’s a good idea to keep Thanksgiving small, ideally only celebrating with members of your own household and avoiding travel if possible. Going out for a rager the night before certainly wouldn’t be helpful in stopping the spread. That also means that folks looking to get cozy at the end of the night should probably take a rain check.

“I’m kind of hoping if my [local] booty call is being responsible and gets COVID testing, then it’s on.”

Fans of Drinksgiving are bummed to cancel, although many accept it’s just too risky. Peyton plans to stay in and text the pals she’d normally see on Thanksgiving Eve, hoping to at least catch up on each other’s lives, even if they can’t do it over shots.

Dani still plans to drive to Fresno from San Francisco, where she currently lives, but the bars won’t be open, and if she does any socializing, it’ll be a small gathering at a friend’s house. Her Thanksgiving Eve squeeze doesn’t live in California, and she suspects he might not be flying home for this round, but she’s not sweating it.

“If we do hook up, that’s great,” she says. If all else fails? “There’s always next year.”

More like this
Hinge Added A Video Prompt Feature, So Get Your Camera Rolling
By Hannah Orenstein
Are Quality Time & Gift-Receiving Love Languages Compatible?
By Lexi Inks
The Differences Between Polyamory & Open Relationships
By Lexi Inks
How To Set Rules If You're In An Open Relationship
By Lexi Inks
Get Even More From Bustle — Sign Up For The Newsletter