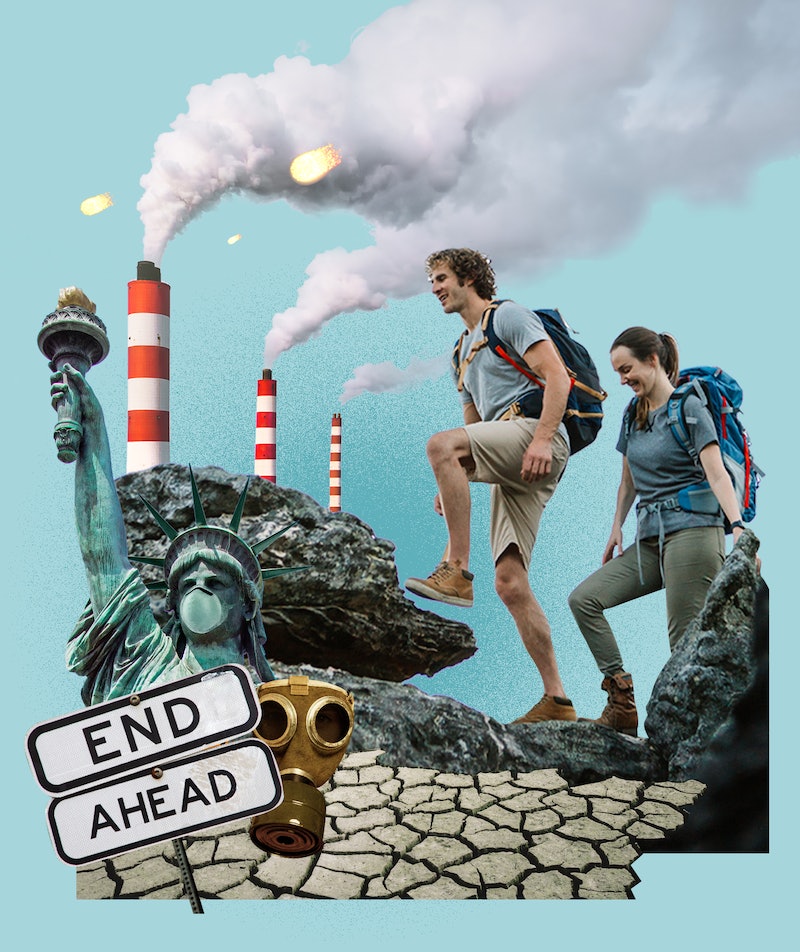 I’ve always found the idea of natural selection a bit insulting. You think I’m not sufficiently evolved to weigh a potential partner on their merits as a conversationalist, rather than their field-tilling biceps, Mr. Darwin? And for over a decade, I lived my convictions — it’s been years since I dated a man over 5’8.” I’ll take a nerd with a sly wit over a burly bison hunter any day of the week.

Truthfully, though, I hadn’t outsmarted Darwin. I had simply naturally-selected for a changing world. The plurality of the people I’ve dated have been computer programmers, a 21st-century skill if I ever saw one. And I’ve continued to adapt. During the pandemic, when I was unable to access public transit, I found a partner with a car. Once I got vaccinated, I found a partner who enjoyed going outside. This isn’t natural selection per se, but my romantic preferences do change in accordance with the disaster du jour. And today, as my climate-change anxiety rises with the sea levels, I find myself fearing a world in which I need to survive in the woods — and pining for a partner who can join me.

Let me clarify right now, before you start typing out an email that I will not read: This is specific to me. I’m aware that life confined to the woods is not the most obvious risk from rising sea levels, and additionally, hiking doesn’t have to be something everyone is willing or able to do. And yet, my personal climate anxiety journey has manifested in a yearning — on an almost primitive level — to live without modern comforts. To be a person of the land. A less annoying Walden, if you will. And while I consider myself independent, the thought of assuming the fetal position in my thin-walled tent while a bear steals my marshmallows makes me long for backup.

I started my hunt in the most obvious way — I googled “dating apps for backpackers.” Google showed me no dating apps, but instead told me I should join a backpacking club. That seemed like quite a lot of work, so I moved onto Plan B — find partners the usual way (apps), and then see how they fared in the wilderness. Can they pick the right berry? Do they know which mushrooms are poisonous, and which are fun? What do they do when they see a bear? What if it’s a cute, smallish bear, and I really want a photo? Are they turned off by me dropping a squat literally anywhere? (I love to pee in nature. It's so pure.) I would take my dates into the woods, and I would find out.

On this matter, my friends questioned my judgment. I see their point — it’s usually not advisable to spend time in secluded areas with near-complete strangers. I never went into the woods on a first date, which, to be honest, did little to assuage their concerns. The rest of my actions were characteristically impulsive. I invited a second date on a camping trip with two of my best friends. I assumed he would say no. When he said yes, I tactfully surmised he must like camping. Or at the very least, know what camping was. Quite the opposite — he didn’t bring his sleeping bag. The camping trip was lovely (for me), but the date was a disaster — I can’t be expected to provide all the warmth!

I took another to Breakneck Ridge — a mountain along the Hudson River known for its capacity to, well, break necks. My lady-parts tingled on our first date, when he said hiked 400 miles on the Appalachian Trail. Excellent, I thought, a real Cheryl Strayed type. The rest of his personality felt like a mismatch, but I’d been advised not to try this trail alone. I thought if he leapt through the steepest inclines with the delicacy of a gazelle, I could overlook our incompatibilities. When he asked why women pee sitting down, however, I could not.

I suggested rock climbing to another (who listed “rock climbing” as an interest on Hinge, no less). He told me he only climbs indoor rocks. Ah, okay, I’ll just tell the shifting glaciers to keep things inside. I took another to an REI first-aid course, so we could develop our survival skills together. He ended up failing the final exam — he couldn’t identify the difference between a Band-Aid and an Ace Bandage, which is when I decided to stop sourcing men from Bushwick.

My hopes of finding a partner with whom I could weather the extreme weather began to wither. Then, I met someone. It only takes one for the grueling process of dating to suddenly feel the opposite of futile. Unfortunately, he’s not much for the mountainous, rugged outdoors. He prefers a flat topography. I told him in the event that we’re running away from a tsunami, we can’t expect the route to be flat. He told me he doubted our ability to outrun a tsunami. Which is when it hit me. Wait! In the event of a tsunami, I could be the one to carry him!

I don’t need a partner who can survive in the wilderness — I’m capable of doing so myself. Or at least, more capable than the majority of people I meet in New York City. I’ve learned which berries and bears are fearsome, and I know the right position to crouch in should lightning strike. Our partners don’t need to be people who can protect us, nor do we need partners at all. Maybe the impending apocalypse is a chance to find ourselves, solo.

But I still want my partner to go into the woods with me — not because I think it will be necessary, but because I think it will be fun. Much like my newfound unwillingness to fly to weddings I don’t want to attend, I’m using climate anxiety as an excuse for exercising my own preferences. But, sure, if you find the idea of sex on the side of a mountain thrilling, I’ll probably drop you my number.

More like this
The Juiciest “Would You Rather” Questions For Couples
By Alice Broster and Rachel Mantock
I'm 42 & I've Never Had Sex. Is It Too Late?
By Sophia Benoit
This TikToker Has Genius Advice For Boosting Your Dating Confidence
By Lexi Inks
Are Gemini & Leo Compatible In A Relationship?
By Kristine Fellizar
Get Even More From Bustle — Sign Up For The Newsletter