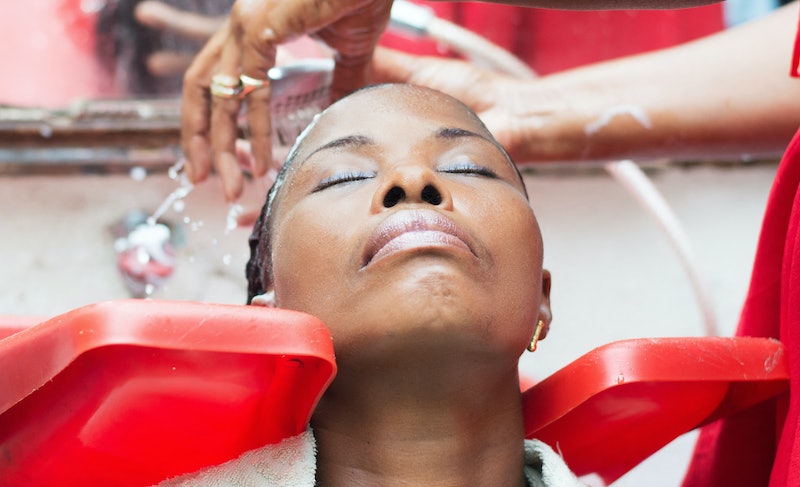 The demand for hair relaxers — heavy-duty chemicals that permanently straighten tight curls — has drastically fallen over the last couple of years, as Black women are increasingly embracing their natural hair texture. Still, relaxers are commonly used as a means to straighten Afro and very curly hair types, and at-home relaxer kits can be purchased in various beauty stores across the UK and online. Recently, a new petition has called to remove toxic relaxers from shelves for serious safety reasons – here’s what you need to know about it.

As it currently stands, close to 3,000 people have signed the #NoMoreLyes petition to remove toxic hair relaxers from UK shelves. The petition was created by Level Up, a growing community of UK feminists, in response to an Oxford University study that found “Black women who repeatedly use hair relaxers containing a chemical called lye are at 30% increased risk of breast cancer.”

In the report, the increased risk of cancer is directly related to “consistent use” of relaxers containing the ingredient “lye” — also known as sodium hydroxide, it’s a heavy-duty chemical that many mainstream Black haircare brands, such as Ors Olive Oil, claim to no longer use.

For Black people who grew up with brands such as Dark & Lovely and Softsheen, they’ll be familiar with the “no lye” promise on many popular hair-relaxer products.

However, the petition states: “Even products that are marketed as ‘no lye’ – but still contain harmful hydroxides including calcium hydroxide and lithium hydroxide – have been linked to hair loss and scalp burns.” Sadly, this is a familiar story among those who’ve had relaxers applied for too long or incorrectly.

“As long as these products are still being sold, Black women are at risk of serious health conditions,” reads the petition. “It’s time to demand that all beauty brands remove lye and other harmful hydroxides from their hair products.”

The #NoMoreLyes petition has been directed to bosses at L’Oréal, Strength of Nature LLC, and Revlon, who all make, develop, and source Black hair products.

Meanwhile, on Twitter, the campaign is gaining traction, as Black women tweet their dismay at the findings.

As Level Up fundraiser Seyi tweeted: “Almost every Black woman I know, including myself, has used a relaxer at some point. Some of us still use relaxers & have done for years, as have our mums & grandmothers. Now we’re told that lye-based relaxers can actually increase our risk of breast cancer by 30%.”

She continued: “Lye (and similar hydroxides) is SO corrosive – it’s literally the stuff that’s used to unblock drains. That’s what we’re putting on our heads. Shouldn’t we be able to trust that our hair products won’t kill us?”

More like this
Gen Z Are Twice As Likely To Identify As Queer, According To New Data
By Sam Ramsden
Why Being “Too Sensitive” In Relationships Is A Good Thing
By Lexi Inks
18 Hinge Prompt Answers To Try If You’re Looking For Something Casual
By Lexi Inks
TikTok’s New Beauty Hack Involves Drying Your Hair With A Pasta Strainer
By Catharina Cheung
Get The Very Best Of Bustle/UK
Sign up for Bustle UK's twice-weekly newsletter, featuring the latest must-watch TV, moving personal stories, and expert advice on the hottest viral buys.