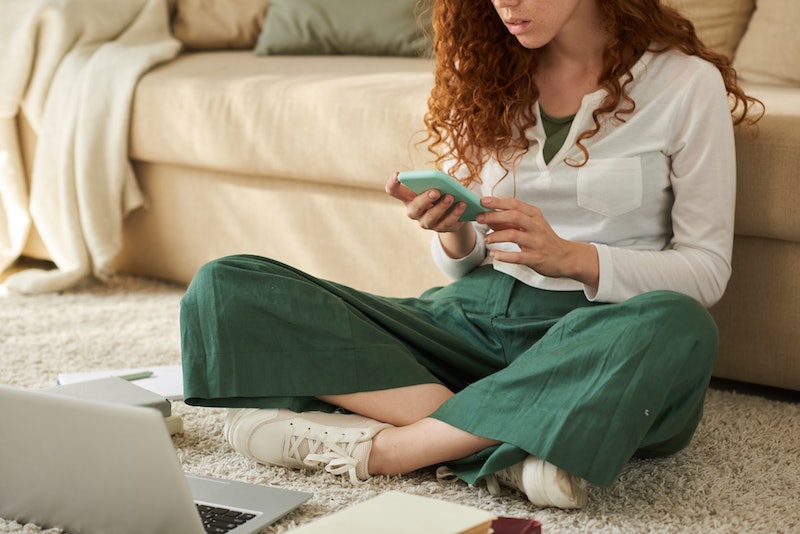 Looking for ways to set boundaries in your relationships, process emotions or change behaviour? A licensed therapist on TikTok can advise you in less than 60 seconds. Welcome to 2020, where therapy isn’t confined to an hour-long counselling session that you waited months for – instead, everyone can access it via their social media feeds. Short clips with the hashtag #TherapistsOfTikTok have been watched over 22 million times, with IRL therapists gaining huge audiences by making videos on the subject.

The videos are meant to be educational and entertaining, as TikTok therapists aim to reduce the stigma around therapy and mental health conditions, with the hope of prompting users to seek personalised support outside the app. However, there are growing concerns that the videos are increasing the risk of self-diagnosis, reducing therapy into soundbites and encouraging non-professionals to make unqualified, inaccurate videos. So how helpful is TikTok therapy, especially to a predominantly younger audience?

“It’s like Web MD on steroids,” says Hera Hussain, founder of Chayn, an award-winning feminist tech project, addressing gender-based violence by creating survivor-led online resources. “I think the content around managing stress, dealing with panic attacks and anxiety is great, but as soon as we get into the more complex psychological conditions or symptoms, it becomes really important to consult professionals.”

Hussain says she’s passionate about not peddling pseudo-science or unsubstantiated claims in her work. “I’ve been seeing [content like this] shared from TikTok, and I’m really irritated by it, as I’ve seen many people self-diagnose. They’ll say stuff like: ‘I think I’m 70% bipolar and 40% ADHD.’ What does that even mean? I’ve got a degree in psychology and I’m alarmed by this ease of diagnosis.”

Hannah, 22, is a regular TikTok user and initially found the videos reassuring. “I struggle with a lot of mental health issues, so it was comforting to know that even in my relaxing downtime, I can still access support and strategies that could help,” she tells me. She goes on to say that she thinks it’s important to normalise therapy for younger viewers and challenge harmful stereotypes of mental illness. However, due to the TikTok algorithm the videos also appear on her timeline when she doesn’t want to see them. “It’s getting to the point now where I’m bombarded with so much different advice that it’s starting to overwhelm me, and become a problem of its own. I feel like if I’m not constantly working on myself, recognising my trauma, etc. that I’m failing, which just isn’t what I need when I’m casually scrolling through TikTok,” she says.

Are TikTok therapists aware of these concerns? I spoke to psychologist Dr Julie Smith, who has 1.1 million TikTok followers, about how she navigates the fine line between educational and potentially harmful content. “It's less about saying, here's your list of things to diagnose yourself with. It’s actually the opposite – it’s awareness. I’ll always put in my caption or comments that these are not clinically diagnosable symptoms: ‘If you’re worried about mental health, seek support’,” Smith says. There are some topics she doesn’t talk about in her TikTok videos, because she feels she can’t do them justice in a short amount of time. “I tend to stick to simple things that have one clear message that people can take away,” she continues. “Like exercising, or the idea of prioritising sleep or self-care or time with your friends. Things people don’t realise are important to your mental health. You know, simple skills that don't take much in the way of learning, like slow breathing techniques or how to put together a self-soothing box.”

Despite concerns of misdiagnosis and triggering content, the comments on TikTok therapy videos like Smith’s are mostly filled with praise. “You are actually my favourite TikToker... I’m having depression and stress problems, but you are really helping me,” reads one. “Another brilliant video… you’re helping so many people,” reads another. But, what about those making TikTok therapy videos with no qualifications? “I think that’s been happening on the internet way before TikTok,” says Smith, “and in some ways, it makes it even more important that professionals do get on there – counteracting any misinformation.”

Dr Elena Touroni, a consultant psychologist and co-founder of The Chelsea Psychology Clinic, agrees that the danger lies in poorly executed videos. “The quality is very varied: some are professional and educational, while others use humour, which can be quite trivialising,” she says. While Touroni is not on TikTok herself, she does think that these videos can play a role in raising vital awareness, but cautions that they should never be a substitute to seeing a professional. “From the selection I’ve seen, more psycho-educational content would be helpful. But, there are perhaps not enough caveats and disclaimers letting people know that they shouldn’t be diagnosing themselves using these apps.”

So, the experts conclude, for a small dose of therapised light relief, by all means head to TikTok; for everything else, see a professional.