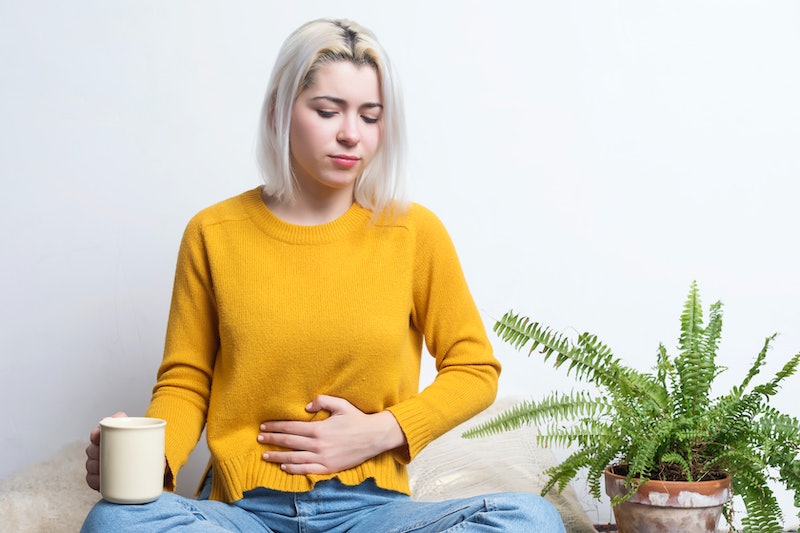 Although TikTok might not be the most obvious place to seek advice on settling an upset stomach, it’s oddly become a valuable source of anti-nausea information. Videos tagged with #nausea have over 50 million views, and everyone from ER doctors to pregnant people are dolling out advice on how to avoid puking. TikTok hacks for fighting nausea range from sniffing strong substances to sipping settling soups, and according to the viewers, a lot of these hacks are legit. So much so that people who live with emetophobia, or the fear of throwing up, are turning comment sections into support communities. “It’s so interesting to see that so many people have a phobia of throwing up, I thought I was the only one,” one user commented in a video about acupressure points.

There’s no question being nauseas is miserable, whether you live in fear of throwing up or not. If you’re pregnant, seasick, riding out some questionable happy hour $1 oysters, or just trying to get through a gory scene in a movie, having a few hacks on hand to fight the system could be clutch. Here are four viral hacks for dealing with nausea, straight from TikTok — plus, what a doctor thinks of them.

Could fighting off the waves of nausea be as simple as taking a whiff of an alcohol wipe? According to Dr. Natasha Bhuyan, M.D., regional medical director at One Medical, this hack is legit, and sometimes used in the hospital. A small study found that sniffing rubbing alcohol for a few seconds every 10 to 15 minutes is effective in reducing mild to moderate nausea.

While many people believe that acupressure has helped to reduce the intensity of nausea, according to the National Center for Complementary and Integrative Health, there isn’t any strong evidence that applying pressure to certain parts of the body has any effect on the stomach. Dr. Bhuyan says the theory on why this works is that it “potentially helps release muscle tensions and increase blood circulations,” which might reduce the wrath of nausea. So there’s no harm in testing out these pressure points, as they might have other positive effects, but don’t count on them to save you from spewing.

If you have a strong gag reflex, humming can help to place your tongue in a position that can reduce you instinct to, well, gag. Dr. Bhuyan is not entirely convinced this technique is effective, but says that the vibrations created in the mouth while humming might ward off the urge to wretch temporarily.

If you are feeling nauseous, eating or drinking might not feel intuitive, but certain ingredients have tummy settling properties, and if ingested slowly, can chase away the urge to puke, like this TikTok broth. “Evidence shows that ginger is most effective for post-operative nausea and pregnancy-related nausea,” Dr. Bhuyan tells Bustle, adding that there’s not a lot of evidence ginger does much for nausea caused by motion sickness. And while TikTok tonics containing small amounts of baking soda might temporarily relieve acid reflux or an upset stomach, thanks to its pH balance and anti-inflammatory properties, it should be noted that misuse of baking soda can cause serious health problems.

More like this
The 11 Benefits Of Aerial Yoga, According To Trainers
By Carolyn Steber
10 Primal Movement Exercises That'll Improve Your Mobility
By Carolyn Steber
How Many Burpees Should You Do Per Day? Here’s What Fitness Trainers Say
By Carolyn Steber
Ashamed Of Your Screen Time Stats? Here's How To Change That
By Alexis Morillo
Get Even More From Bustle — Sign Up For The Newsletter
From hair trends to relationship advice, our daily newsletter has everything you need to sound like a person who’s on TikTok, even if you aren’t.