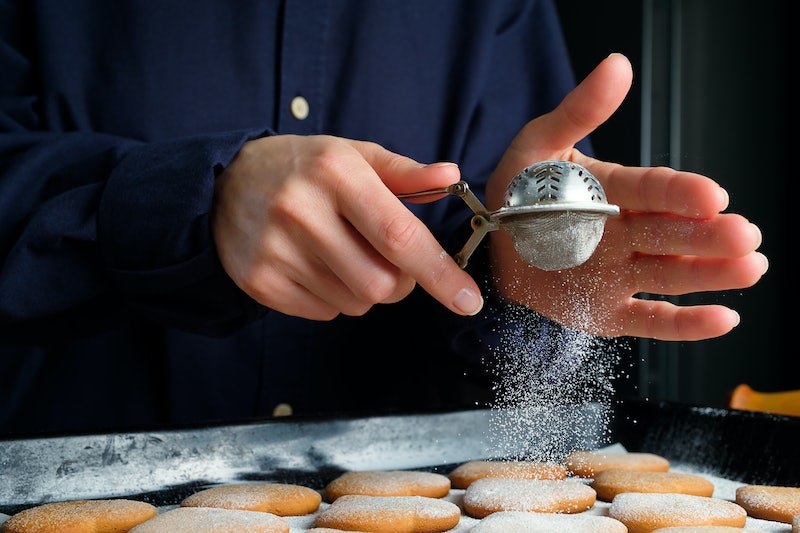 It begins like any other baking video. Leah, 23, holds up a flour jar to measure out enough for a Victoria sponge. A tic — "Willy Wonka!" — shakes the canister, and flour dusts into a cloud across the screen.

For bakers with Tourette Syndrome on Tikok, this chaos is a part of their process. They cook up cakes, biscuits, and other delicacies for their followers. They also film the tics — semi-involuntary movements or sounds that are characteristic of Tourette Syndrome — that interrupt their process. While it may make a mess, the videos serve a broader message about living with the neurological disorder.

"Baking has proved a great way to show everyone how Tourette's syndrome can affect the activities people so often take for granted," Leah, who posts as @adayinthelifeofleah, tells Bustle. "Education through comedy!"

Bakers with Tourette Syndrome attract huge audiences on TikTok. The videos with the hashtag #tourettesawareness have nearly a billion views, on TikToks from people like Glen Cooney, who has 2.5 million followers, or Australian Jade O'Connell. They show off their baking skills regularly (and break a lot of eggs in the process). One of O'Connell's TikTok baking videos has clocked 4.5 million likes since it was posted in May 2020.

"When my Tourette’s flared up severely last year, I took inspiration from them and decided to educate and raise awareness about this condition in a similar way," Leah says.

Dr. Melita Petrossian M.D., a neurologist and director of the Movement Disorders Center at Providence Saint John's Health Center, explains that tics are like an itch. You can choose not to scratch it, but it's very difficult to resist for a long time. Tics can include anything from motor tics, like grimacing or tapping out a rhythm, to phonic tics, like saying syllables, words, or animal noises. Tics also aren't the only feature of Tourette Syndrome; symptoms also include obsessive-compulsive tendencies, attention deficits, and anxiety. Still, they're some of the most visible — and often, most stereotyped.

Leah's baking videos are charming, but they can also make for stressful viewing. She tells Bustle that she wants to dispel the idea that the disorder is "funny". "Online, a lot of us creators show the more light-hearted side of Tourette's syndrome, as it does gain us a lot more recognition and therefore a platform to raise awareness, but the reality is that’s only a snippet," she says. "It’s an extremely exhausting, stressful, and sometimes painful condition."

Leah wants to make people understand the nuances of the disorder. "The idea that it's all swearing really riles me up, because the obscenities (scientifically known as coprolalia) is actually a vary rare type of tic to have," she says. Only around one in 10 people with the disorder have coprolalia, according to the Centers for Disease Control & Prevention (CDC); Dr. Petrossian says it's more like 5%. But when people watch Leah's videos, which feature many different types of tics, she finds that the swearing is often the thing they notice. It's a stereotype she says she really wants to dispel.

The TikToks challenge the idea that all versions of Tourette Syndrome are the same. "Just like any other neurological condition, there’s a spectrum," Leah says. The disorder varies wildly in degree, and Dr. Petrossian says that in many people, tic severity actually declines in adulthood. Tics can be triggered by stressful events and extreme emotions. "The idea that we can’t live normal happy lives like everyone else is frustrating," Leah says.

Leah enjoys seeing her videos making an impact. "It’s really great to see someone comment that I’ve helped them in some way — whether that’s in terms of helping educate them on this condition or brightening their days with the funnier side." But, she says, there's room for more; she's always keen to see people ask more questions, particularly her younger followers. "That’s really what my platform is for — raising awareness and education, not just entertainment (although I can admit that some of my tics are hilarious)."