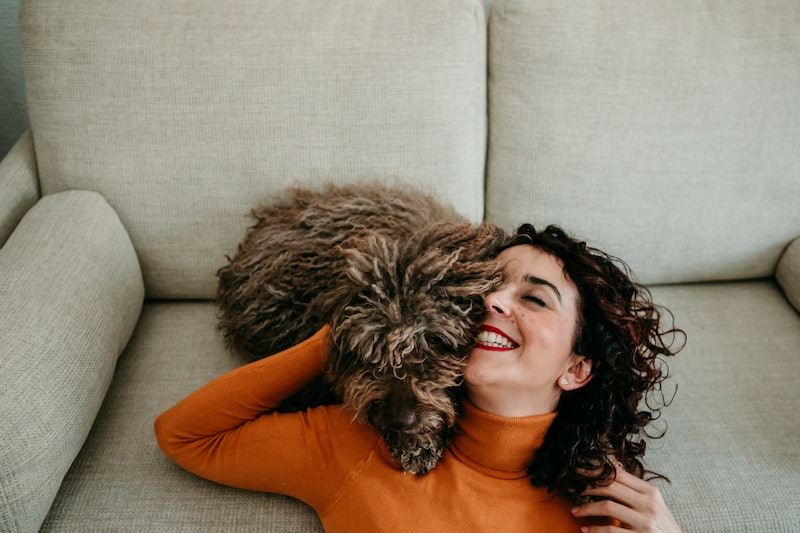 Everybody's got that one friend who insists on only looking at the bright side. Broke their leg? "Well, at least my arms are fine!" Heard you got fired? "Now you can look for a nicer job!" A little rose-colored thinking can help you get through the bad times, but experts tell Bustle that toxic positivity, where someone absolutely refuses to face the dark side of anything, can do serious damage to relationships and emotional health.

"Toxic positivity involves focusing, allowing yourself to feel, or only expressing emotions that our culture deems as positive because they make us feel good," psychotherapist Karen R. Koenig, LCSW, tells Bustle. Relentless Pollyanna-ing is cute for a while, she says, but it's inauthentic — and it stifles real responses to hard situations.

"More than just being positive and upbeat in the face of struggle or challenges, toxic positivity is about denying, minimizing, and silencing your (or others') authentic feelings," psychotherapist Jennifer Murayama, teaching faculty at The Ackerman Institute for the Family and a therapist with mental health provider Alma, tells Bustle. Little Miss Sunshines don't want to know about their own bad feelings, and won't acknowledge it in other people either. You can't talk to them about your struggles because they won't listen.

"It reminds me of the phrase 'positive vibes only,'" counsellor Myisha Jackson, LPC, tells Bustle. "It is believed that if you focus the negative emotions, then it will bring on negative feelings and behaviors." Wanting to avoid unpleasantness sometimes is understandable, but toxic positivity teaches you to suppress any experiences that might be seen as negative. "You are acting like they are not even there," she says.

Why Toxic Positivity Is So Harmful

There isn't anything inherently good or bad about feelings, positive or negative. "In truth, emotions are value-neutral, although they may generate happiness or sadness in us," Koenig says. "They are merely giving us information, as do our senses, about the safety or threat of our environment. We need all of our emotions to survive and thrive." People who try to be positive all the time end up without the tools they need to cope.

"It is OK not to be OK," Jackson says "You do not have to fake happiness and ignore how you truly feel." Suppressing emotions doesn't make negative feelings disappear; it just makes them more intense. And that can impact your health. A 2013 study published in Journal of Psychosomatic Research found that, over a 12-year period, people who regularly repressed their feelings were at higher risk of premature death from many different causes, including cancer. Not letting out how you're really feeling can put huge strain on your body that builds up over time.

Toxic positivity can also harm your relationships, Murayama says. "When you pivot quickly to highlight the bright side, instead of taking time to make space to hear their feelings, it's like putting in ear plugs and slapping a muzzle on the other person," she says. Insisting on good vibes can make you distanced from those around you, as you can't be honest or listen to their struggles. The strain of always being positive can also make you feel angry, isolated, and self-destructive, she says, without more sustainable outlets for negative feelings.

Toxic positivity is also damaging in a larger context. "So much of this country refuses to validate, accept, and embrace its flaws and shameful history in regards to the experience of Black, Indigenous, and people of color," Murayama says. "It is a prime example of toxic positivity — the incessant commitment to keep looking toward the future and ignore anything painful or uncomfortable." The toxicity of toxic positivity goes far beyond cheerful hashtags on Instagram.

How To Watch Out For Toxic Positivity

A toxically positive person, Koenig says, won't be able to talk about their inner life besides the sunshine and rainbows. "It may expressed by something saying they always feel 'fine', or trying to make yourself feel fine all the time," she says. They won't be able to have conversations where you express discomfort or distress, because they'll immediately invalidate your feelings, try to convince you it's not so bad, or refuse to listen. Negativity may make them angry, confused, or scared.

While gratitude and glass-half-full thinking can be a good approach in some circumstances, sometimes stuff is just, well, bad. Emotional health means having a full range of tools in your toolbox to express and unpack how you feel. "I teach people that negative thoughts, feelings, and behaviors are normal," Jackson says. "It's how you react to them." Acknowledging your sadness and anger doesn't mean you're an Eeyore. It's just part of being an adult human in the world.