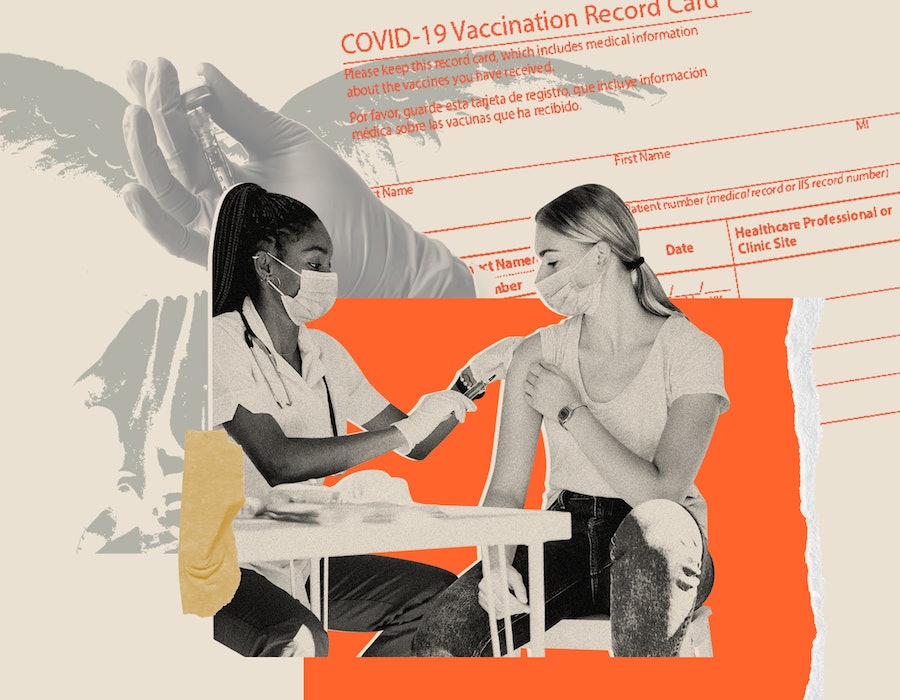 Even as states chug through their COVID-19 vaccine rollouts, many people report not being able to make vaccine appointments. Enter vaccine angels, people who volunteer to get their neighbors their shots. Carlin, 35, works in human resources in the hospitality industry in Chattanooga, TN. Since January, she’s been able to help over 20 of her coworkers and their family members make vaccine appointments, on top of her day-to-day job duties. Here’s how she does it.

When the vaccines started to become available in Chattanooga, there were some hurdles and hiccups with the roll-out. At first, you could go to a drive-thru site without making an appointment — they initially had to turn people away because so many showed up — but then ended up with extra doses and had to beg people on social media to come. Later, they offered alphabetical openings by last name, then switched to a system where you can make an appointment online.

One of my coworkers, Sam*, 75, a cashier, tried and failed to get vaccinated through both systems. He isn’t the best with computers to start with, and as a frontline team member, he didn’t have computer access during the day. He didn’t know when new appointments were released, let alone how to make an appointment online.

I watched him go through weeks of having tremendous difficulty making an appointment and said, “I’m going to step in.” This is someone I have worked closely with for many years and consider to be a friend. I told him I’d keep my eye out for new vaccination appointment slots. After I got an email about some, I called him into my office so we could try to get him signed up. We were basically on the edge of our seats, expecting that all the slots would be filled. When we got to the end and confirmed an appointment for him, we were both so surprised and relieved. We cheered and hugged. I know — no hugging right now, but it was such a happy moment. Sam almost cried with relief. It would have been very challenging for him to get an appointment otherwise. The whole process only took two minutes in reality, but it felt like forever because of all the stress and nerves.

After I helped Sam, he started spreading the word throughout our 100-ish person company. Some people who report to me, who were in earlier phases for qualification for vaccination, didn’t have a computer at home. I would approach them and say, “You meet the vaccination criteria. If you want, I can help you with this.” I have helped 21 people from beginning to end through the vaccination appointment process: my boyfriend’s parents were two of them, and the other 19 were coworkers or their family members.

I’m not trying to pressure anyone into getting vaccinated, but I’m available to help if they want.

A fair amount of my job involves email, and I’m lucky that I have the flexibility to work on multiple projects at once. I keep a running to-do list of work projects and then of everyone who has asked me for vaccine sign-up help. Getting people appointments is my priority. I signed up for the county health department’s emails to find out when there are new appointment spots at the county vaccination locations — which I’ve found more helpful than refreshing websites — and set Outlook reminders to call around to local pharmacies to see if they have a “waste” list for any unused doses that will get thrown out. There are so many great Facebook groups, too, to get up-to-date and accurate information about vaccine availability.

There are so many people in Chattanooga who aren’t computer literate or who don’t have consistent computer access. If you have access to those things, why wouldn’t you help? So many of my co-workers probably could figure out the system on their own, but they don’t have the ability to wait for available appointments because they have front-facing roles interacting with guests. If you can’t sit at a computer as it’s happening, you will miss it.

I’m not trying to pressure anyone into getting vaccinated, but I’m available to help if they want. So far, one person I spoke to decided to wait for more information before making an appointment. Luckily, she is technology-savvy, so I didn’t have concerns about her getting signed up if she decided to get vaccinated.

I am already in a position with my job where I’m supposed to be an advocate for people who work for me, and I want to continue that. I’ve thought about setting up with a laptop in a public place on my off days to help people get signed up, but I’m worried people would be distrusting of a stranger trying to help them get a vaccine.

In the early days of the pandemic, there was so much that I couldn’t do. We had to furlough people at the end of March until we reopened in mid-May of last year, and I couldn’t get so many people the unemployment pay they needed. I just felt so helpless. Maybe this makes me sound selfish, but it’s good for me to feel like I can resolve an issue, when there were a lot of times this past year when I couldn’t do anything to help. It’s not difficult or a burden. I see it as something necessary.