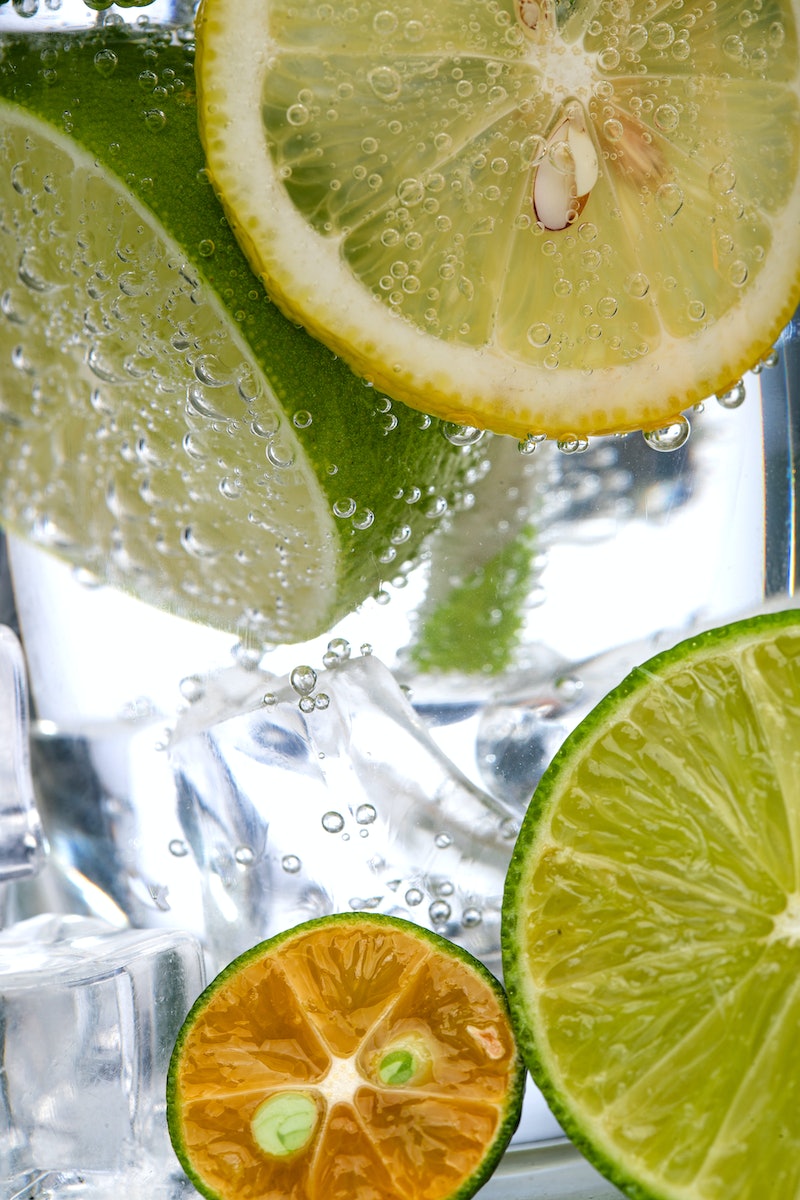 Between your Thursday night wine and your Saturday night cocktail, you have a fairly good sense of what kind of hangover you're in for on Friday and Sunday mornings. But beyond the type of alcohol you're imbibing, you might not realize how much dehydration enters into the hangover equation. Some drinks are more dehydrating than others, but the amount of dry mouth you wake up with has more to do with alcohol volume, how much you drink per session, and what you combine with your favorite tipple.

"Alcohol is a diuretic, which means it causes you to urinate more by inhibiting you from reabsorbing water, thus increasing your risk of dehydration," Dr. Michael Richardson, M.D., a provider at One Medical, tells Bustle. "The higher the alcohol content a drink has (or is absorbed in your body), the greater the diuretic and dehydration effect."

Drinks with a higher alcohol content — and therefore more potential to dry you out — include vodka, gin, rum, and whisky. Beer and wines, meanwhile, tend to have lower alcohol content, though fortified wines like sherry and Madeira pack a kick at above 14.5% alcohol. The most alcoholic spirits in the world, according to Food & Wine, include absinthe, vodka, Everclear grain alcohol, and quadrupled whisky — a lethal-sounding concoction first made in the 17th century that can also double as motor fuel.

Drinking a lot of low-alcohol drinks can also add up to a very thirsty evening, though. One standard drink, according to American Addiction Centers, should contain around 0.6 ounces of pure alcohol. You can get that amount from 12 ounces of beer with 5% alcohol, 8 ounces of malt liquor with 7% alcohol, one shot (or 1.5 ounces) of hard liquor with 40% alcohol, or 5 ounces of wine with 12% alcohol.

"If you are looking to find a drink that is less dehydrating, try choosing ones that you would enjoy over a longer period of time," Richardson says. Sipping on one whisky all evening will likely mean you ingest less alcohol overall than three or four standard glasses of wine. Diluting a vodka with soda will also mean it's more hydrating overall, though it'll still have diuretic effects.

Some cocktails can take a toll on your hydration because of additional ingredients. "If you pair alcohol with another diuretic substance such as caffeine, you may naturally urinate more and become even more dehydrated," Dr. Alexa Mieses Malchuk, M.D., a family physician, tells Bustle. So that espresso martini or Irish coffee might end up making you need the bathroom.

Sugary drinks don't have the same problems, unless you have difficulty regulating your blood sugar. "For some folks with medical conditions such as diabetes, they urinate a lot already based on blood sugar level," Mieses Malchuk says. "Therefore drinking a sugary alcoholic beverage can make it worse and cause dehydration."

The key to making sure a night out doesn't turn into a head-pounding hangover is to drink plenty of water throughout, Mieses Malchuk says. That will increase your ability to reabsorb water, and leave you more likely to wake up feeling sparkling and ready to face the day — or at least less inclined to put a pillow over your head.