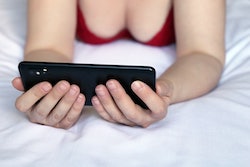 "This creates safety and a sense of intimacy that can be felt off-screen," Hussain tells Bustle.

"There's no way of knowing if something was 'ethically made,'" Jean says. "If something comes out after, if there was a consent violation on set, if there was something after the fact — it's not like someone is sitting there, making sure they went by the ethical standards."

While no one person is responsible for the problematic trends in mainstream porn (like normative beauty standards or racial stereotypes), Jean says individual viewers can choose to break the patterns and to be more intentional with what they're watching. "If you're only seeing the same types of bodies over and over again, and only seeing them behave the same way — then that starts to be what we expect, it starts to be what we're into," Jean says. "It's important to expose yourself to various bodies, to a variety of races, sexual identities, to change things up, and learn new things."

"Shaming for any behaviors creates more dissonance," Hussain says. "It's important to see healthy ways of doing all things reflected on screen! But that doesn't mean that we can't also watch things for pure entertainment. It's about balance and understanding when and how we are watching."