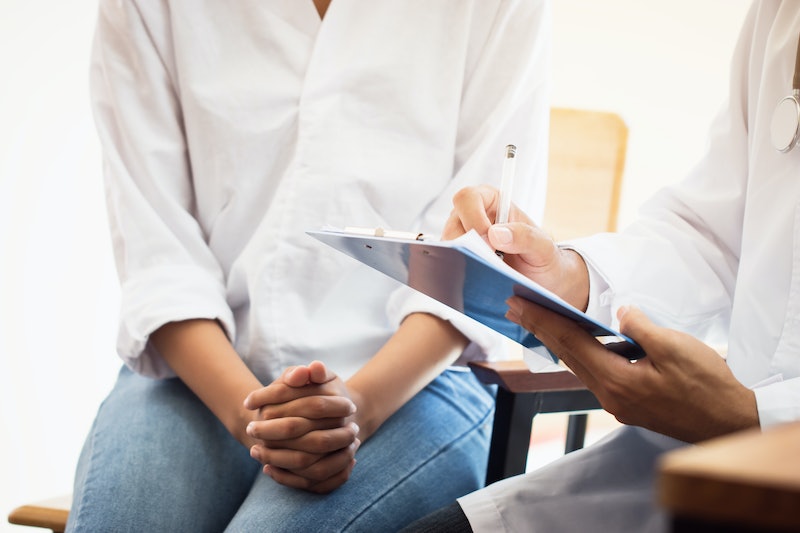 In the UK, 1.5 million people live with endometriosis, a similar amount to the number of women affected by diabetes or asthma. Despite this, 45% of women are unable to name any symptoms of the condition, and confusion and misconceptions about it are common. On top of this, research collected by the BBC reveals that it takes an average of seven and a half years to diagnose endometriosis in the UK.

The cause of endometriosis is unknown. It’s a condition in which cells similar to those found in a person’s womb will begin to grow in other parts of their body. The cells will build up, break down, and shed, leading to bleeding, like a period. However, the blood has nowhere to go and this can lead to severe pain, inflammation, and the development of scar tissue. There are many misconceptions attached to endometriosis, a leading one being that it can currently be cured.

In 2020, the University of Edinburgh announced that it had discovered that a drug previously used in cancer treatment could potentially be effective in treating endometriosis. According to their study, the drug (known as dichloroacetate) minimised endometriosis lesions and reduced their production of lactate, a potentially harmful waste product.

Dichloroacetate is currently undergoing trials, but 24-year-old Jessica who lives with endometriosis and is taking part in the research told the BBC that her pain “decreased immensely.” She added: “It's definitely changed my life so far, having been on this treatment after so many failed treatments and medications and operations."

Although there is hope for new and better ways of managing endometriosis, those living with the condition will also need to be aware of existing treatments and means of symptom management.

As the NHS and Endometriosis UK websites explain, pain relief for milder cases of endometriosis can come in the form of over-the-counter medications or physiotherapy. For slightly more severe cases, Endometriosis UK mentions pain modifiers (drugs developed for other conditions but that can help with pain relief, such as Tricyclic anti-depressants), Transcutaneous Electrical Nerve Stimulators (or TENS, unobtrusive machines with electrodes that attach to the skin and send electrical pulses into the body to relieve pain), and specialised pain clinics.

For long-term, severe cases, three of the main options available in the UK are listed below.

This means that people can be prescribed the combined pill, the coil, an IUs, an implant, or an injection.

“If you have painful periods then that monthly battering in your pelvis can contribute to more pain down the line as the body starts to remember,” says Lone Hummelshoj, chief executive of the World Endometriosis Society, “this can lead to something called central sensitisation which means the body can’t forget that it’s in pain. So, by eradicating the period you don’t have the bleed and you don’t have the pain.”

However, hormone treatment isn't without its drawbacks. The various options all have their own side effects, ranging from headaches and nausea to increased blood pressure and mood swings. Anyone looking to have hormone treatment will need to discuss these in detail with their GP.

It’s worth noting, also, that these treatments are of course not suitable for those hoping to become pregnant.

Endometriosis.org states that GnRH analogues – which can be administered by a nasal spray or injection – have been used to help people with endometriosis for over 20 years. GnRH analogues stop the production of oestrogen all together, but come with a pretty drastic side effect as they essentially place the body in a temporary menopausal state

Speaking about this treatment option, Hummelshoj says: “You can’t really take GnRH analogues for more than six months and ideally you need a hormone replacement therapy to go with them to mitigate the side effects.”

Hot flushes, mood changes, sleep disturbance, and a drop in your libido are all recognised as side effects of menopause and are replicated by GnRH analogues.

There are a few surgical options that endometriosis patients can look into.

Laparoscopy (also known as keyhole surgery) is a procedure in which surgeons will make small incisions in an attempt to remove endometriosis tissue through excision (cutting it out) or ablation (burning it off).

In very severe cases where keyhole surgery has not worked and the patient is willing to give up the option of having a child through natural means, a hysterectomy may be considered. However, the removal of the womb is obviously a major surgery and one with lifelong impacts.

A total hysterectomy will also include a bilateral salpingo-oophorectomy, which means removing the fallopian tubes (salpingectomy) and the ovaries (oophorectomy).

Unfortunately, as with laparoscopy, there’s no guarantee that endometriosis tissue won’t return after a hysterectomy. Endometriosis UK explains “If any endometriosis was left behind, or was growing elsewhere inside the body, you may be likely to continue to experience symptoms.”

More like this
18 Hinge Prompt Answers To Try If You’re Looking For Something Casual
By Lexi Inks
How Ovulation Affects Your Sense Of Smell, Libido, & More
By JR Thorpe and Lexi Inks
Here’s Where The NHS Nurses’ Strike Currently Stands
By Sophie McEvoy
Why Being “Too Sensitive” In Relationships Is A Good Thing
By Lexi Inks
Get The Very Best Of Bustle/UK
Sign up for Bustle UK's twice-weekly newsletter, featuring the latest must-watch TV, moving personal stories, and expert advice on the hottest viral buys.

This article was originally published on March 18, 2020