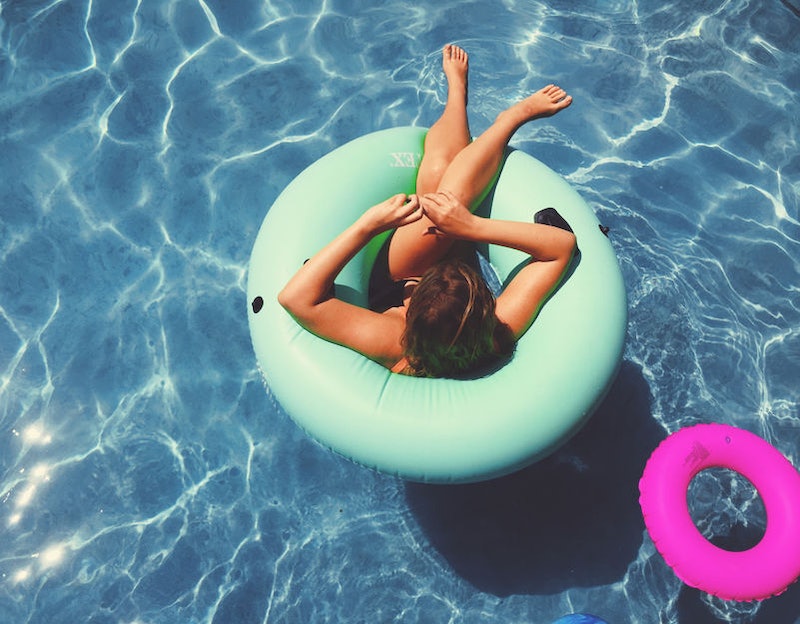 First thing in the morning, my rings slide on easily. Come night time, they can barely be pried off my swollen, sausage-like fingers. Sound familiar? Of course, this is because they heat up during the day, and with this happening more and more frequently given the warmer months – especially during heatwaves – I thought I'd ask why my fingers swell in the heat, and how to beat it.

Why Do My Hands Swell In The Heat?

The first thing to note is heat-related swelling affects women more than men, according to the NHS. It happens, the NHS says, because in hot weather, our bodies send more blood to the skin. The blood vessels expand, in an attempt to let the body cool down by allowing heat to escape through the skin's surface. As the vessels do so, some of their fluid flows into the tissue, which is what causes the appearance of swelling, Tammy Olsen Utset MD, MPH explains to Prevention.

Basically, hands swell in the heat because your body is doing its very best to cool you down. The condition should go away on it's own, when you find yourself in a colder environment. It's generally not serious, so first of all, don't worry. Most remedies offered up for swollen fingers are for when there's a more serious underlying condition. But if you want to try to speed the de-swelling process up, either for aesthetic reasons or because it's uncomfortable, there are a few things you can do.

What’s The Safest Way To Remove Rings From Swollen Fingers?

Most of the time, you can safely slip a ring off a swollen finger with the help of some soap, Vaseline, or even Windex. But in extreme cases when the swelling won’t recede, it can become an emergency. “As the finger swells, it becomes a restrictive band,” Eric Adkins, MD, emergency medicine physician at The Ohio State University, told Health. “That can cut off blood supply to the finger.”

He continued: “If you wait too long, you could be at risk of loss of function or losing a finger entirely, depending on how things go with the ring.”

Obviously, that’s a worst-case scenario. But if you start to notice prolonged pain, continued swelling, or a change in colour of your finger, you should seek emergency assistance and try not to continue attempting to take the ring off as you could make it worse.

Are There Any Remedies For Swollen Fingers & Hands?

The Mayo Clinic suggests stretching out your fingers and then balling them into fists, and repeating this motion a few times. This suggestion is specifically for when you're exercising in the heat, but the same theory applies when your hands swell up all on their own in the heat.

You can also try and elevate the hands, reports LiveStrong, rather than have them dangling by your sides. Again, this will help circulation and blood flow, and keeping hands elevated at night, maybe on a pillow, could generally help with this, the site says.

Byrdie suggests icing your hands: this will help the blood vessels shrink back down, and in so doing, they will stop leaking fluid into the fingers. DIY Remedies suggests putting a teabag on your fingers and dunking them in water mixed with epsom salts, which admittedly are known to generally help with inflammation.

What Can I Do To Prevent My Fingers From Swelling In The Heat?

It may not be what you want to do when it’s sunny, but trying to stay active will keep blood flowing and circulating around the body, which will help the swelling come down.

Ultimately, if it's getting uncomfortable, the best cure is prevention: stay inside! And remember to stay hydrated, as puffy fingers are a sure sign your body is reacting to temperature conditions. The NHS notes that general heat swelling in feet and hands (medical name: oedema) shouldn't be treated with diuretics, as these can dehydrate the body. If it doesn't go down on it's own when you're somewhere cooler, the swelling may be caused by other things, such as imbalanced sodium levels, and you should seek help. But in summer, swollen fingers is an unfortunate, but pretty normal, side effect of enjoying sunny days.

More like this
11 Health & Wellness Gifts Any Fitness Devotee Will Appreciate
By Rachel Lapidos
Wimbledon Alters All-White Kit Rule Amid Candid Period Discussions
By Catharina Cheung and Rachel Mantock
These Are The Best Supplements For Runners
By Carolyn Steber
I Visited Remedy Place, The Social Club Transforming The Wellness Industry
By Rachel Lapidos
Get The Very Best Of Bustle/UK

This article was originally published on June 26, 2018