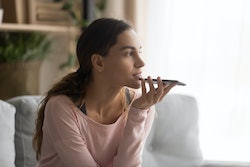 With many couples, families, and roommates working from home together for the first time, people are noticing how their quarantine-mates present themselves — often with surprising results. It can be jarring to hear the way your partner's voice changes when they make a presentation over Zoom, but your parents might be equally shocked to hear how polite you are with a customer service operator, despite how snippy you are with them. It's very common to have different voices for different scenarios, and according to vocal perception expert Nadine Lavan, Ph.D., these changes happen both consciously and subconsciously.

To present yourself in the way you see best fit for a circumstance, you might use different pitches, octaves, and tones to project different demeanors. "Some of the changes are happening volitionally," Lavan tells Bustle, listing examples like choosing to speak in a conspiratorial whisper, speaking very slowly to make an important point, or speaking clearly to build trust. "In contrast, some changes happen outside of our control and we can’t help but sound different," she says, like when your voice shakes when you're nervous.

Because you change voices so frequently, you're rarely aware of the fact that you’ve done anything to sound different in the first place, at least not consciously. But if you've ever played back a video of yourself speaking and cringed at the completely unfamiliar sound of your own voice, you won't be surprised to learn that there's a reason why we sound different to ourselves and to others, depending on the situation.

These are the most common voices you might be confronting in your house right now and the reasons why they stand out.

According to Lavan, people likely use a different voice to speak to their friends than they would use to speak to their boss. Reports show that one way people make their voices more "professional" is by dropping their pitch to sound more assertive — famous examples of this are Margaret Thatcher, the former Prime Minister of the United Kingdom, and Theranos' Elizabeth Holmes. "While there are some indications that lower pitched voices are indeed perceived to be more dominant, this added perceived dominance will probably not be of much use if what is being said doesn't make any sense," Lavan says.

The "I'm On The Phone With Someone I Don't Know" Voice

What happens when you speak on the phone depends on your context, and on what you are trying to achieve. "People with a non-standard accent might change their accent when they are on the phone or when talking to strangers, to either be more easily understood or if they are worried that their accent might be perceived in a negative way," Lavan says. Other people will raise their volume and speak with more elevated diction — like when you throw in all of your SAT words — so as to ensure that they are understood and respected. Lavan says she's also noticed that people tend to raise their voice up or down, out of their natural zone, particularly when speaking to strangers on the phone.

The "I Was Called On In Class Voice"

If you've ever been mortified by the meek or froggish voice that came out of your mouth when you were called on in class without warning, you've heard your surprise voice. "Usually, surprise is associated with a higher voice pitch," Lavan says. "Our voice can genuinely sound a bit weird and can have an unexpected sound when we are startled." This has to do with a quick increase of tension in the throat area, followed by a fast attempt to clear the throat and project the voice. People with social anxiety also tend to speak in high-pitched shaky tones. Taking a deep breath before speaking can help to lower the voice and relax the throat.

You might think you know what your voice sounds like, but if you've ever heard yourself in a video, you know there's a big discrepancy between what your voice sounds like to you and what it sounds like to others. The reason for this is something called bone conduction. "When we usually hear our voice while speaking, we are listening not only to the sound that is coming out of our mouth, but we are also hearing our speech 'from the inside of our head'," Lavan says. "That's because our voices originate in our throat and travel through bone and tissue to get to our ears." This means the sound of our voice changes after we're done listening to it. "Only relatively low-frequency sounds make it through the bones and tissue, so our own voice sounds in the end more resonant to us when we speak compared to when we hear a recording of ourselves speaking," Lavan explains.

When talking to friends, Lavan says people are most likely to change their voice to sound similar to the group, rather than up or down to stand out. "There's something called 'phonetic convergence' where people who interact often with each other (and are therefore highly familiar) start to sound like each other," she says. "One study has recently tracked how the accents of a group of people who overwintered in Antarctica changed. At the end of the winter, the people sounded more like each other." Think: Lindsay Lohan’s ever-evolving global accent(s). This vocal change can happen both consciously and subconsciously, but often is a natural reaction that occurs subtly.

While it might seem like people have pre-programmed voice settings that are associated with these relatively broad situations, Lavan says that people are even more nuanced than that. “There are many, many different ways that people can change their voices to convey intentions or information with the voice, even within a single situation.” And though a new voice might sound like a fake voice, Lavan says that most of these vocal alterations are authentic in that they are unknowingly used. The more time you spend with people, the more voices and traits you’ll get to know.