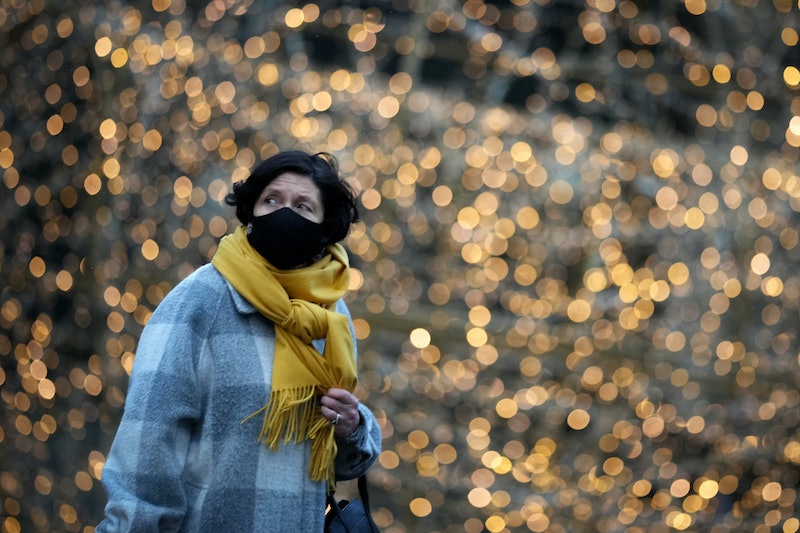 In response to a sharp rise in Covid infections across Western Europe and the discovery of the Omicron variant, more and more countries have reintroduced lockdown measures to curb the latest coronavirus wave.

For the past few months, the governments of England, Scotland, Wales, and Northern Ireland have suggested that the public can look forward to a more normal Christmas in 2021 than we experience in 2020. But as Prime Minister Boris Johnson moves England into Plan B restrictions and the Omicron variant continues to rapidly spread, is there a chance of a Christmas lockdown in the UK?

Will There Be A Christmas Lockdown In England?

On Dec. 15, the UK recorded the highest amount of coronavirus infections since the pandemic began in March 2020. During a government press briefing on the same day, senior government scientist Dr Jenny Harris warned that the new variant is “probably the most significant threat we’ve had since the start of the pandemic.”

As transmissions continue to rise and the Omicron variant spreads, the possibility of another Christmas lockdown is ever increasing. Currently there are over 9,200 confirmed cases of Omicron in the UK, and according to government data, cases of the new variant “could be doubling at a rate of as little as 2 to 3 days.” If the variant continues to grow at this pace, there’s a possibility that “at least 50% of COVID-19 cases” could be caused “by the Omicron variant in the next two to four weeks,” the UK Health Security Agency said in a statement.

On Dec. 8, Boris Johnson announced the implementation of Plan B, which includes more restrictions to curb the spread of Omicron and the rise of Covid infections in general.

On Dec. 10, compulsory face mask-wearing was reintroduced in “most public indoor venues” including theatres and cinemas, followed by the work from home order on Dec. 13.

During the Dec. 15 press briefing, Boris Johnson reiterated that no further measures would be put in place, and advised individuals to make up their own minds about going to parties or socially mixing. “We’re not closing hospitality. We’re not canceling people’s parties or their ability to mix,” he explained. “What we are saying is – think carefully before you go.” Professor Chris Whitty advised that people shouldn’t mix with those “you don’t have to for either work or family things, only for things that really matter to you.”

The implementation of Plan B measures comes as the booster vaccine rollout continues, which may not necessarily prevent Omicron from spreading due to a lack of data on the efficiency of the vaccine in fighting this variant. “You don’t wait until it’s too late in this kind of situation. There’s too much uncertainty and too much risk if you don’t act early,” Dr Mike Gill, former regional director of public health for the South East, told Sky News (on Dec. 9). “The lesser protection from vaccines we have the bigger the overall interventions have to be said.”

Will There Be A Plan C & What Could It Entail?

According to the Evening Standard, the government hasn't officially put together a Plan C. Instead, the government’s “winter plan” includes a set of “contingencies” that can be put in place if Plan B isn’t enough.

And it seems that’s already started. On Dec. 12, the UK’s Covid alert level was raised to level four following the increased spread of Omicron. This means that “transmission is high and direct COVID-19 pressure on healthcare services is widespread and substantial or rising.” Boris Johnson also gave an emergency address to the nation announcing that everyone over the age of 18 will be offered a booster jab by the end of December, so long as it’s been three months since their second jab. The original plan was to offer the jab to everyone by the end of January, per Sky News, but the sharp rise in Omicron cases has resulted in this plan being brought forward.

Further restrictions could be reintroduced if cases continue to rise over the festive period, including an expansion of face mask rules, 10-day self isolation for those who have come into contact with any Covid variant, and self check-ins at pubs, cafés, and restaurants, per iNews.

When asked about the possibility of further measures being reintroduced, the Prime Minister’s official spokesperson said that while “Plan B is a sensible and proportionate step” they “can’t rule anything out at this stage.” However, leaked documents obtained by the Guardian suggest that the UK Health and Security Agency, (UKSHA) has warned health secretary Sajid Javid that “stringent national measures” need to be put in place by Dec. 18 to avoid “mass hospitalisations and overwhelming the NHS.”

Will There Be A Christmas Lockdown In Scotland?

Scotland hasn’t ruled out the reintroduction of stricter measures over Christmas. On Dec. 14, First Minister Nicola Sturgeon asked people in Scotland to limit socialising to three households on the run up to Christmas. This advice doesn’t apply for the day itself, but she recommended that families should limit socialising “as far as possible” to curb the spread. Queues and social distancing in shops will be reintroduced over the festive period, including two-metre guidelines and a limited number of customers in stores.

Public Health Scotland is also encouraging Scots to put off any festive parties this season amid rising concerns of the transmissibility of the Omicron variant. “To help minimise the further spread of Covid-19, and Omicron in particular, I would strongly urge people to defer their Christmas parties to another time,” said Dr Nick Phin, the director of public health science and medical director at Public Health Scotland.

“The impact of this transmissibility has been seen in recent weeks, with a number of Omicron outbreaks linked to parties,” he added. “I appreciate that everyone is keen to celebrate this festive season, particularly after the pressures of the last 20 months, but by postponing some plans we can all do our bit to protect ourselves and our loved ones.”

The Scottish health body urged the public to use lateral flow tests twice a week, and each time they are socialising with people outside their household. “Public health advice is rapidly developing given the fast pace of the spread of this new variant,” a Scottish Government spokesman said. “We would encourage everyone to follow the advice from Public Health Scotland.”

Will There Be A Christmas Lockdown In Wales?

Welsh First Minister Mark Drakeford said in October that unless anything unexpected happened, those in Wales would have a Christmas "much more like the ones we are used to". However, he hasn’t rejected the possibility of reintroducing stricter restrictions if there’s a “formidable wave” of Omicron cases, or a drop in public immunity levels, per the BBC.

Health Minister Eluned Morgan also stressed that “tougher restrictions” couldn’t be ruled out over the festive period. “The last thing we want to do is cancel Christmas. I think it’s important we make that absolutely clear,” she explained during a government press conference on Dec. 15. “But we’re certainly not taking anything off the table.” She advised that people “take precautions now, so we don’t see the increase in rates we’re expecting.”

As in England, Wales has a “Covid Urgent” plan which will be put in place if the NHS seems likely to be overwhelmed. The current restrictions in Wales are already similar to those reintroduced with England’s Plan B measures.

Will There Be A Christmas Lockdown In Northern Ireland?

On Dec. 4, Deputy First Minister Michelle O’Neill said there are “no plans to increase the level” of restrictions before Christmas Day, per BBC News, and that existing restrictions were “enough” for the time being. But Like Wales and Scotland, Northern Ireland may return to stricter lockdown measures should levels of coronavirus cases take a turn for the worse. In early November Health Minister Robin Swann told BBC Radio Ulster that the government is doing “all we can” to avoid another lockdown, but added: “will we have to look at further restrictions? Possibly.”

What Have The Experts Said?

Some experts are already recommending that the British public “delay planning Christmas for as long as possible” until something concrete is said by the government.

“Rates of transmission are still very high, numbers of Covid weekly deaths continue around 1,000, the NHS is described by those running it as ‘hitting breaking point’ and ‘unsustainable’,” Prof Susan Michie of University College London told the Guardian. Michie is a member of the government’s Covid-19 behavioural science team and is a member of the Independent Sage group.

Some experts have even warned that Omicron cases could rise to 1 million by the end of the month, with up to 2,000 hospital admissions per day.

More like this
90 Epic Truth Or Drink Questions To Play 'Say It Or Shot It' With
By Bustle UK
Gen Z Are Twice As Likely To Identify As Queer, According To New Data
By Sam Ramsden
Pret & Costa’s Coffee Is The Strongest On The High Street, According To Which?
By Sam Ramsden
This Is When Netflix Is Going To Start Charging You For Sharing Passwords
By Darshita Goyal
Get The Very Best Of Bustle/UK
Sign up for Bustle UK's twice-weekly newsletter, featuring the latest must-watch TV, moving personal stories, and expert advice on the hottest viral buys.

This article was originally published on November 23, 2021