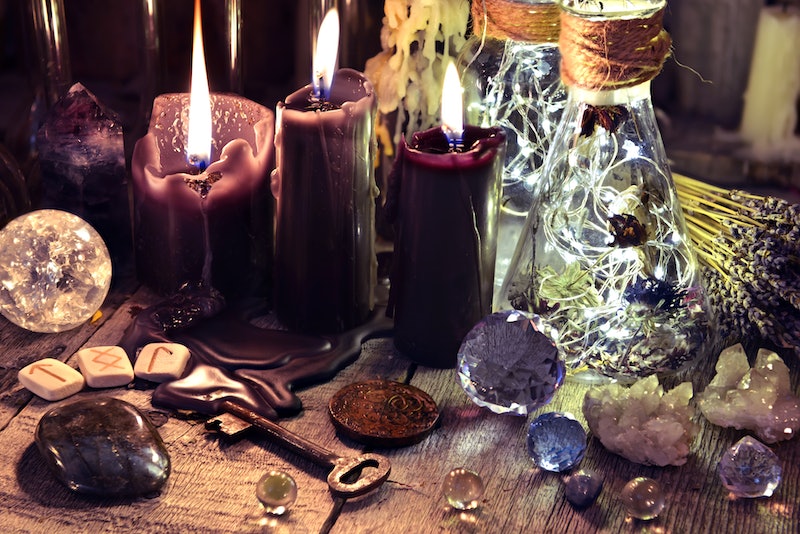 Before late May, #witchtok content featured subtle romance spells, negative energy hexes, and full moon rituals. But following widespread demonstrations protesting the killing of George Floyd and other victims of police brutality, the witches of TikTok have been doing spells in support of the Black Lives Matter movement. Practitioners explain that while witchcraft might not have an obvious contemporary link to the racial equality protests, there is a deep-rooted connection.

"Historically, curses and hexes have been in this country since the Trans-Atlantic slave trade," Reina, who posts as @theofficiallareina on TikTok, tells Bustle. "The ownership, safety, and protection of our bodies has always been political," she continues. "These workings have been attributed to great change, fights of freedom, and establishing community during times of trial and suffering."

In the videos, witches of all races and ethnicities light candles, perform lunar rituals, say incantations, and ask for protection for Black protestors. In some videos, they recite hexes aimed at the police or anyone who might harm the demonstrators. The videos have hashtags like #witchesforblm and #blackwitch and #witchesoftiktok. Some witches are showcasing the work they are doing on their own, while others are using TikTok to teach viewers how to perform simple spells, draw sigils, and manifest progressive allyship themselves.

"Protection spells work by manifesting a strong intention for the safety of the protestors. Spells could be as simple as burning a white candle or doing a complex ritual," Celina tells Bustle.

"Hexes and curses can be used to slow police down — witchcraft is all about manipulating the supernatural to your will," Celina says. According to Alexia, there are risks and logistics involved with hexing, like exposing yourself to negative energy or potentially getting blocked or shadowbanned on TikTok, but she’s "perfectly fine with seeing witches stand up for what is right." To Alexia, hexes are one of the only ways to protect people that are hundreds of miles away or that you haven't met. "Defunding the police will need the power of everyone in America," she adds.

So how do you hex the police? “These spells work in the form of asking our Ancestors — those who have been subjected to the injustices of this land, stolen Africans, murdered revolutionaries, martyrs and innocent lives taken during the Civil Rights Movement — and our own ancestral background [for help]," Reina explains.

While some videos seem like they're teaching others to perform the same spells or rituals, Reina says that the workings are "delicate" and have rules, in many cases requiring the practitioner to have protection of their own. Meaning, if you are a newbie witch, it’s not a great idea to try a spell on your own. Still, Reina notes that calling the workings "dangerous" evokes a sense of fear that should not be associated with Pan-Afro spirituality. "These practices should be honored and handled with care. If you are looking to curse or hex or alter a course, I highly suggest hiring a seasoned practitioner — and especially in the support of BLM, hire a Black/Pan-Afro practitioner," she adds.

The witches of TikTok would like their new followers to know that the practice is more common and more dynamic than they might realize. "I know many witches and practitioners who are also psychologists, counselors, physicians, non-profit organizers, all who work to heal the community and provide services that would benefit our systems if we placed more funding and care towards these organizations and individuals," Reina says.

And while the witches of TikTok are all for other people learning about the craft and trying out some basic spells, they stress that, like the Black Lives Matter movement, it’s not a "trend." Instead, Celina says it should be seen as "a community of people rising up against a heinous issue." For Alexia, the visibility that comes with being "trendy" is valuable. "I feel happy that we are being seen and heard right now."

"The best advice on this I can give is for white witches and practitioners to also elevate voices of Black and Non-Black POC witches," Reina says, adding that much of the foundation of witchcraft features practices, studies, and folklore borrowed from POC witches. She also notes how crucial it is to "decolonize your practice." The "fetishizing of witches … is demeaning and takes away from the history and art of our craft," Celina adds.

Though TikTok is a fine place to dip your toes into witchcraft, Reina says that the best platform for the practice to actually effect change is our communities, IRL. "By establishing connections with one another in the physical world, feeding each other, housing and protecting each other, listening to each other, we can grow together."