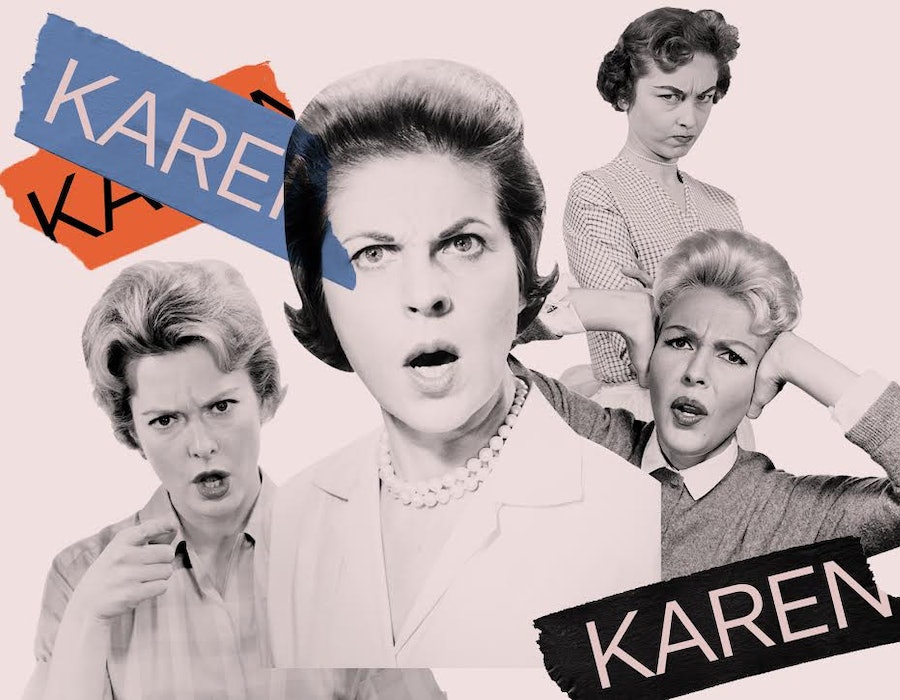 In 2019, a friend sent Karen S., 29, a link to a “F*ckYouKaren,” a Reddit community. The thread was filled with photos and stories of women acting entitled in public. “Even though it was one of the top communities at the time, I’d never heard it mentioned anywhere else,” she tells Bustle. “While it made me feel bad at first to have my name mocked, I came to understand that they were talking about an important phenomenon.”

Urban Dictionary defines “Karen” as “the stereotypical name associated with rude, obnoxious, and insufferable middle-aged white women. In other words, a “Karen” is the type of woman who demands to speak to your manager or complains when you stand in the grocery store express line. Chances are, you’ve personally been victimized by a “Karen” — you just knew them by Amy, Sarah, or Emily. “Karen” — one of the top 10 most common names for baby girls born in the 1950s and 60s — has evolved into much more than a moniker. Now, American Karens are forced to reckon with their name becoming a symbol of white privilege.

Some trace the origins of the Karen meme back to a 2008 Dane Cook comedy routine, in which Cook said, “Every group has a Karen and she is always a bag of douche.” But the term didn’t really take off until 2017 when the aforementioned r/F*ckYouKaren picked up steam. Over the past few months, “Karen” has transformed from a slight to into a common insult, taking on an even more insidious meaning: A white woman whose racist actions puts Black lives at risk. In May, when Amy Cooper, a 41-year-old white liberal woman living in New York, called the cops on Christian Cooper, a Black man who was birdwatching and asked her to leash her dog, she was immediately dubbed a “Karen” by the Twitterverse. “Amy Cooper (pronounced Karen) says she was afraid of the Black man in the park,” Sunny Hostin, co-host of ABC’s The View, tweeted. Soon after, “#CentralParkKaren” began trending on Twitter. Today, so-called-Karens are everywhere—- disrupting Black Lives Matters protests, yelling at store clerks, declining to wear masks — and it’s all cataloged online.

I've started sometimes using Kari instead of Karen or mentioning the meme when I introduce myself.

“Everyone I know has referenced it,” Karen S. says. “People I don’t even like have texted me to make jokes about it.” She’s not the only Karen to notice. “I feel like I have to caveat all introductions,” Karen D., 26, tells Bustle. “It comes up every time I meet someone new!”

Other women named Karen have even chosen to alter their names to avoid the stereotype. “I've started sometimes using Kari instead of Karen, or mentioning the meme when I introduce myself, to get it out of the way,” Karen M., 35, tells Bustle. Karen D. however, stands by her name. “It’s my name — I’ve had it forever.”

While not all Karens are coming up with nicknames, many agree that “Karenphobia” has gotten out of hand. “The basis of the meme is fair, but what started out as a meme which rightfully called out white women on their privilege has evolved into a politically correct way for people to insult women,” Karen M. says.

But the Karens realize they aren’t the ones at risk — it’s the victims of the women who act like “Karens.” Karen may just be their name, but the meme exemplifies what’s problematic about white feminism: that it prioritizes cisgender white women, and ignores their role in perpetuating racism and other social injustices. The leaders of the Karen “movement” don't seek to assert that all women named Karen (#NotAllKarens) are like this, but rather, that there’s a systemic problem that exists within white feminism that’s rooted in white supremacy and privilege. “I think it highlights a disconnect between people who are only willing to go to bat for themselves and unwilling to give up anything about the current system that works for them but may still identify as progressive,” Karen S. says.

So, could the world possibly be on the brink of a Karen rebellion? “I think that there will be a larger push back against the meme, and it will be led by women, but not that it will necessarily be women named Karen,” Karen M. says. There’s only one problem: raising a complaint with “systemic Karen-ism” might play into the very meme they’re fighting against.

More like this
21 Signs You're Not In Love Anymore
By Sara Altschule, Kathleen Ferraro and Carolyn Steber
19 Latinx Therapists & Mental Health Experts To Follow On Instagram
By Kaitlyn Wylde, Naydeline Mejia and Lexi Inks
20 Women Reveal Exactly How Long It Took Them To Get Over Their Ex
By Amanda Chatel and Lexi Inks
Women Around The World Are Cutting Their Hair In Solidarity With Mahsa Amini
By Darshita Goyal
Get Even More From Bustle — Sign Up For The Newsletter