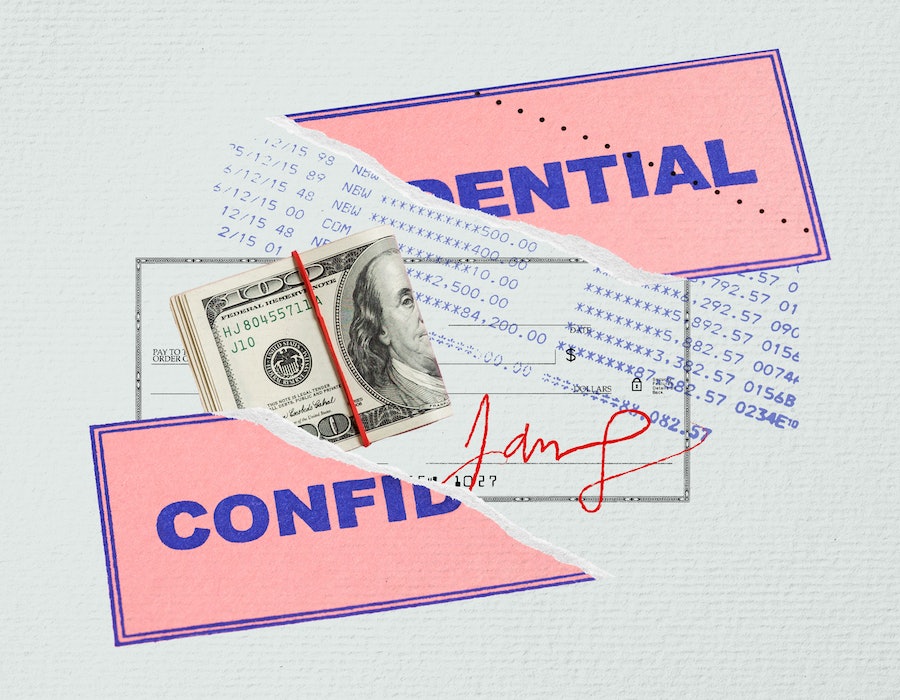 Throughout her 23 years of marriage, Joan,* 53, has maintained a secret bank account that her husband doesn’t know about. The idea that women should always have their own side stash was instilled in her at a very young age by her grandmother, who lived to be 96. “While some call it financial infidelity, I call it self-care,” Joan tells Bustle. To Joan, having her own money means she never has to ask permission from her husband, a concept she finds demeaning, like “being treated like a kid with an allowance: ‘Hey, is it OK if I go get my nails done? Hey, is it OK if I go on a trip?’”

Instead, the Toronto resident believes, “What’s mine is mine, and what’s his is ours.” The two combine finances, but she keeps a private account, which she funds with a combination of inheritance money and earnings from her career in public relations. Her husband, who works in finance, out-earns her but has no idea how much money she has. “The mystery is the spice of life: It’s good to keep them guessing,” she says.

The mom of three was able to fund a “mommy makeover” with her own money — a tummy tuck, boob lift, and getting her eyes done — telling her husband not to worry about it; she’s paying for it herself. “Best decision ever,” she says. “Most men don’t understand the cost of it. They freak out.” Joan wagers that had she run the financials by him, he would have wanted to allocate the money toward something practical, say fixing the chimney. “I’d rather fix me than the chimney,” she says.

Joan also loves to take her kids on big vacations, which don’t interest her husband — another use for the side stash. Suppose her spending doesn’t cut into putting food on the table and keeping a roof over their head. In that case, Joan doesn’t see the harm in using it toward experiences and purchases that she finds meaningful, even if he wouldn’t necessarily agree.

It’s no surprise financial stress can be a relationship killer. And according to a February 2021 Ally Bank survey, even for the 56% of couples who consolidate their finances fully and set money goals together, there’s a greater chance they’ll get upset if a partner spends more than $100 without telling them. For some women, like Joan, eliminating the chance of money woes in their relationships is the answer. But instead of feeling guilty of keeping a secret stash from their partner, they see it as an opportunity for self-care.

Emily, 32, had joint bank accounts and credit cards when she was married but used her personal bank account to pay off a secret credit card she used for solo trips and for buying makeup and clothes when her husband got on her case over her spending choices. Over her four-year marriage, she took vacations to Las Vegas, Chicago, Atlanta, and Paris using this side fund, telling her husband she was traveling for work.

“I started buying what I wanted where he couldn’t ask why I went to Starbucks twice in one week.”

“I felt like I had to justify every purchase,” she tells Bustle. “So, I started buying what I wanted where he couldn’t ask why I went to Starbucks twice in one week.” When she decided to move out, her secret credit card also came in handy for moving expenses.

Emily is in a new relationship now, but they don’t currently live together or share accounts. She says that in the event that she does remarry or move in with someone again, she hopes she wouldn’t need to secretly stash away money — ideally, her next partner wouldn’t be judgmental about her spending choices.

For some women, the instinct to have their own private stash has been passed down for generations. Jasmine*, 31, is married — but has a secret side account she’s saving for a rainy day. The New York City resident has been putting aside a little something just for herself ever since she was a teenager, a practice she learned from her mom. She and her husband combine their finances in a joint account, but Jasmine’s discreet side funds total around $1,200 in stock and crypto, $1,000 in a certificate of deposit (CD, essentially a fixed-term savings account), $500 in cash, and a bank account of $5,000 under her maiden name.

“My mom always told me, ‘Put away a little mad money,’” Jasmine tells Bustle. “My mom and dad have been married for 40 years. She would stow away money whenever she got the chance, and when they moved to the United States, she opened a bank account in her maiden name.” Jasmine says that having the account gives her a sense of stability and security amid uncertainty: No matter what the future may bring, for her relationship or otherwise, “I want to make sure I’m never in a position where I can’t support myself,” she says.

“It helps me have a peace of mind that I can afford things I want when I need them.”

Some see having a discreet side stash as simply a smart move, financially speaking. Anna,* 35, a middle school teacher, opened a secret account because she says her husband is “completely irresponsible with money.” While both their paychecks get directly deposited into a joint account, any time Anna has extra money, be it from stimulus checks, tax refunds, or side hustles, she puts it into her side account.

After making sure their major expenses are covered, Anna also treats herself to purchases that she wants. “Mostly, I use [the secret account] for my personal shopping, the types of non-necessity things that are just for me,” Anna tells Bustle. “I have a couple of clothing subscription boxes and a makeup subscription box. Also, things like hair appointments and random Amazon purchases — vanity purchases and little extra things that I would feel guilty using our money on if our bills hadn’t been paid.”

Anna says having the private account makes her feel empowered and confident. “It helps me have a peace of mind that I can afford things I want when I need them and to know that I don't have to rely on anyone but myself financially,” she says. Joan agrees that having a separate bank account for personal expenses can be liberating, especially as a woman.

“Women take care of everything and often put our friends and kids first,” she says. “Having your own secret fun is a way of putting yourself first.”

More like this
Bumble's "Compliments" Feature Lets You Message Before You Match
By Lexi Inks
How To Deal With A Partner Who Body Shames You
By Lexi Inks
Are Capricorn & Capricorn Compatible In A Relationship? Astrologers Weigh In
By Kristine Fellizar
How To Have A Hometown Hookup Without Catching Feelings
By Lexi Inks
Get Even More From Bustle — Sign Up For The Newsletter