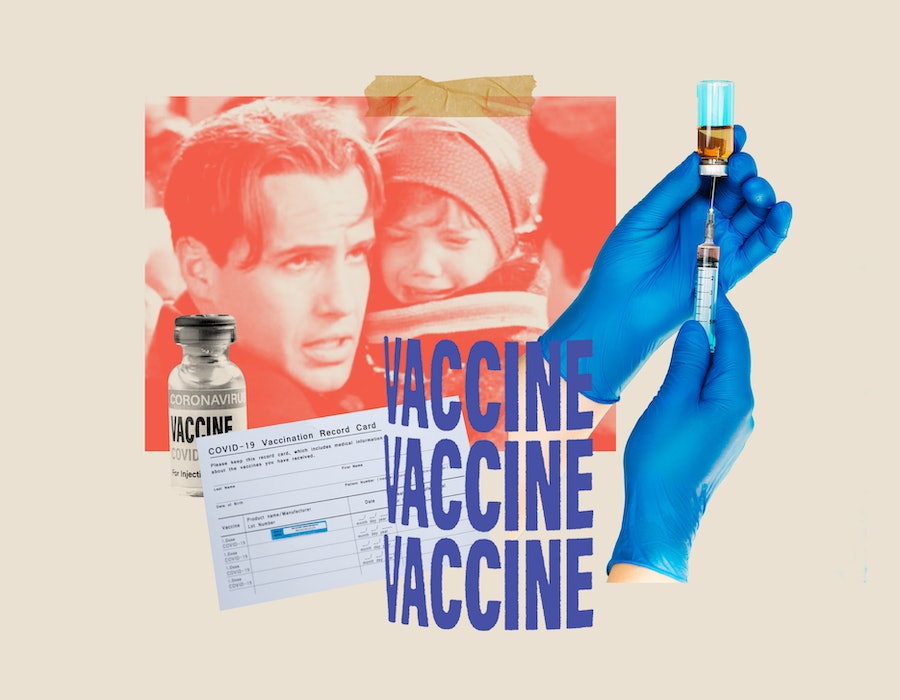 For two weeks straight, Maggie, 30, went to bed at midnight with her alarm set for 5 a.m. The marketing manager was trying to get her 70-something parents, both of whom had pre-existing conditions, COVID-19 vaccine appointments.

“My dad has had cancer, and my mom has high blood pressure,” Maggie tells Bustle. “Still, they were pretty blasé. They felt like their doctor would call them when it was their turn. I had to be like, ‘No, guys, this is all on you.’” But Maggie’s parents still felt the hassle of late bedtimes and early wake-ups, and the stress of endless refreshing the website was too much. So when Maggie finally found appointment availability near her Raleigh, North Carolina, hometown, she booked three appointments. Her second shot is in two weeks.

“Technically, I’m not in any category,” says Maggie, who adds that her state’s access to vaccinations rests on the honor system. While her company does employ frontline workers, Maggie works remotely. If they asked, she would have said she had frontline worker status and showed them her ID card. But she wasn’t asked.

Today, Maggie feels conflicted — especially as she hears stories of other elderly people still waiting for vaccines. While she knows her case isn’t as extreme as some — in Florida, two women were caught dressing as grannies when they were actually younger than 45 — she doesn’t readily admit to friends that she got the vaccine. She’s also begun helping other elderly people find vaccine appointments, based on her own hard-won knowledge in booking appointments for herself and her parents. “Now, more and more people in my age group are getting vaccinated. But a few weeks ago, I felt like I was the only one.”

But she’s not the only one. As vaccine access has expanded, Americans are confronted with a patchwork of rules, regulations, and honor system “attestation” documents. While some states threaten hefty fines for line-skipping — New Mexico residents who lie on the state’s registration portal face a potential $5,000 fine — not all vaccine sites require proof of employment or eligibility. Instead, some rely on an honor system that experts have feared could — and occasionally has — led to some jumping the line to get the vaccine before they’re eligible.

“I wanted to get the shot because I’m single and dating.”

J, 22, a former waiter who got laid off during the pandemic and now pays his bills through odd jobs and help from his family, was able to borrow a friend’s red DoorDash card and signed up for an appointment outside of New York City by proclaiming he was a frontline worker. “I’m looking for a restaurant gig, and I want to be able to say, ‘Hey, I’m vaccinated already.’ I thought having the shot now would give me a leg up,” he tells Bustle. He says that he wasn’t asked for proof of eligibility, but was planning to say he worked for the delivery service and show his friend’s card if asked. “I am a frontline worker. ... I house-sit, I walk dogs, and I help out friends if they need me, but because I don't work for one specific business, I wasn’t eligible.”

Mia, a 31-year-old freelance copywriter in Massachusetts, isn’t eligible but she was also able to snag a vaccine recently. “I basically wore my doctor down,” she tells Bustle. “I would call the office every day until they said, ‘Fine, we’ll call you the next time we have an extra dose available.’” But Mia doesn’t consider herself to be a line skipper. “I wanted to get the shot because I’m single and dating,” she says. “This sounds shallow, but I felt like the shot was a way for me to return to normalcy in a way I haven’t been able to do.”

“No one asked questions, but I would have said I had asthma or diabetes.”

Even though K, 29, a grad student who lives near San Diego, didn’t have the comorbidities legally required to take an appointment, she was able to schedule a shot at a local pharmacy. She just got her first shot this week. “No one asked questions, but I would have said I had asthma or diabetes,” says K, who made sure that she didn’t need to bring medical records before her appointment. For K, the move was financial. “I don’t have health insurance, and if I were to get COVID, I really worry about how much the bills would pile up,” she says. “This wasn’t ideal, but it made sense for my situation.”

But as vaccine access rapidly expands, some who have gotten the vaccine early find themselves in an uncomfortable limbo. While Mia skipped the post-shot social share, she has confided in a few friends who have had mixed reactions to her choice. But she wishes they recognized the work that went into her getting her shot. “The vaccine literally would have went into the garbage,” says Mia, adding that she called her doctors office at least 10 times before she was able to get put on a list for her doctor to call regarding the about-to-expire vaccine. “It was like a part-time job. I think the way the system is set up now so that anyone can get a vaccine if they work to find one.”

At the end of the day, 20- and 30-somethings impatiently waiting in line can take comfort in President Biden’s promise that all American adults will eligible for a vaccine by May 1. Until then, though, the “are you vaccinated” convo is likely going to an remain awkward one.