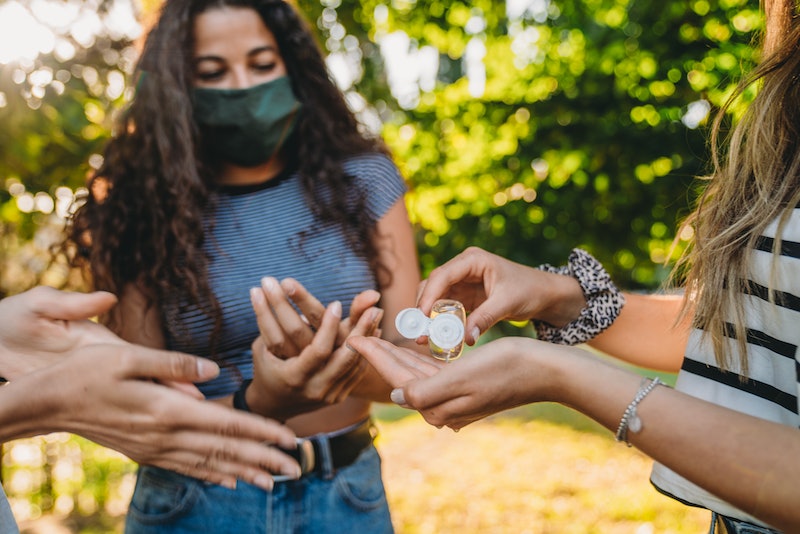 Recently, on a socially distant hike with a friend, I noticed I kept tripping up on when and how to insert myself into the conversation, accidentally speaking over her or starting a sentence at the same time as she started hers. When she asked if I could hear her mid-sentence, I realized I'd forgotten to affirm that I was listening with "mmhms" and "yeahs," used to having my screen muted on Zoom. We both soon realized that Zooming so much was messing with our ability to have IRL conversations.

Through the pandemic, Zoom has kept millions of people connected, helping people avoid coming into unnecessary contact and preventing the spread of COVID. But as states reopen and Zoomers re-emerge into society, they're discovering an unwelcome truth: virtual communication is making people socially awkward, IRL.

"The way Zoom and other video conferencing platforms are set up isn’t conducive for the kind of back and forth, semi-collaborative type of conversations people have in-person," says licensed therapist Caroline Given, L.C.S.W. Only one person can be amplified at a time, which requires more unnatural pauses and gestures than what would occur in person. "You don’t have access to the same audio and visual micro cues as an in-person dialogue that would help you to structure the conversation to be more comfortable, fluid, and natural," Given says. "You have to rely primarily on vocal pitch and tone, facial expressions, the audio the microphone picks up, and the content of what somewhat is saying." It's not quite enough to make you feel like you're having an easy back and forth.

Even though you might be reincorporating some (distanced) in-person hangs now, you might notice your online behavior leaking into your non-virtual life.

"I've trained myself to nod really dramatically and often while someone is talking on Zoom to make it look like I'm paying attention, and now I'm noticing that I'm doing that in person," Miriam, 28, tells Bustle, adding that her partner recently called her out for this behavior over dinner.

Given explains that the environment also plays a role in our social anxiety. "It can be difficult to psychologically prime yourself for a social or work-related interaction at home where you might be unaccustomed to interacting with someone more formally," she says. For example, you would hold yourself in a certain "professional" way while talking to your boss, in the office. But at home, "mixed messages are sent from the environment about what is appropriate." It's hard to know how to behave when you're too comfortable. "If your main communication diet is diminished by technical mishaps and insufficient social cues, it makes sense that the fluidness and increased social data involved with having an in-person interaction again could feel overwhelming," Given adds.

"This weekend I invited a friend over to have a distanced hang in my backyard and felt nervous and panicked the whole time because I could not remember how to act," Liza, 33, tells Bustle. She says she felt "wiped out" and exhausted after her friend left. "I feel like I don't need to see someone again for a while, which is a very weird way to feel for me, as I considered myself a very social person before the pandemic," she adds.

According to Given, the biggest effect of the post-virtual communication era to consider is emotional contagion. "Researchers have clearly established that feelings are contagious among people who interact with one another," Given says, meaning, people often mirror the feelings of the people they spend time with. Essentially, the closer you are to the person experiencing an emotion, the more likely it is that the emotion will be contagious.

"Even though emotion contagion is still taking place online to a lesser degree, Zoom and online communication could be considered a barrier to emotion contagion," Given says. "You might feel less of someone’s anxiety virtually, which can make the experience of in-person anxiety feel that much more intense," she says.

Given says to expect some buffering time as you reacquaint yourself with your social life. "I don’t think we’ve irreparably damaged our ability to socialize," she says, adding that you should give yourself some grace to feel "clumsy" for a while. She promises that once you habituate to in-person conversations, it'll be like riding a bicycle.

Even if it's a long, awkward time before we have a vaccine, Givens says the COVID generation will likely come away with a greater appreciation for the nuances of communication. "If anything I feel the pandemic has positive long-term implications to socializing. Now that we’ve been forced to subsist on sole virtual interaction, I feel we are less likely to take in person socializing for granted and might be more present."

More like this
5 Signs You Have A Toxic Relationship With Yourself
By Lexi Inks
Why We Love Investigating Friendship Breakups
By Carolyn Steber
How Ovulation Affects Your Sense Of Smell, Libido, & More
By JR Thorpe and Lexi Inks
Why Being “Too Sensitive” In Relationships Is A Good Thing
By Lexi Inks
Get Even More From Bustle — Sign Up For The Newsletter
From hair trends to relationship advice, our daily newsletter has everything you need to sound like a person who’s on TikTok, even if you aren’t.