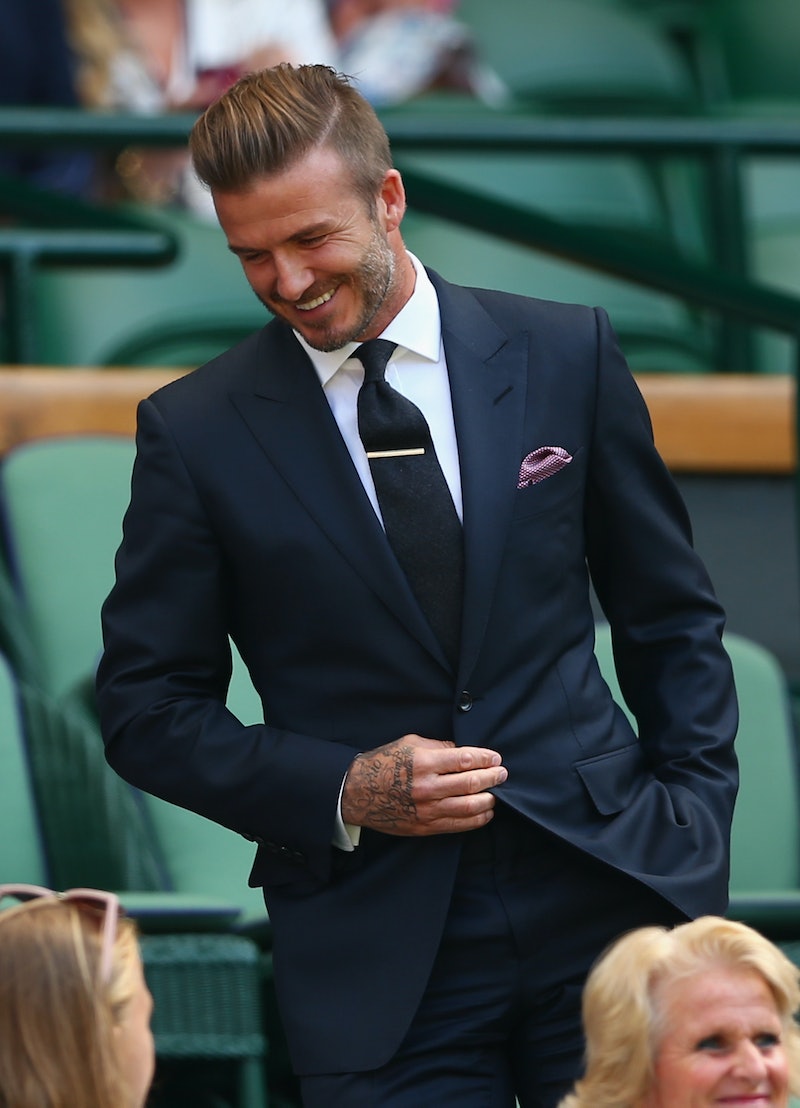 David Beckham is one of those super stylish hunks who makes sleeves of tattoos look like a damn fine accessory. The soccer star and father of four added a new tattoo to his fairly large collection of ink and this one will melt your heart instantly. David Beckham added a "Pretty Lady" tattoo above his existing ink of his daughter Harper's name. The script looks lovely and it lives right on his collar bone and neck. It's not too far from his heart. I didn't need Becks to add the words "Pretty Lady" to his ink to know that little Harper, who just turned four, is adorbs. It's already painfully obvious that Harper is one of the most stylish famous tots of the under-5 group. It's pretty much in the little cutie's DNA.

Her mother is insanely chic and her eponymous designs are "must-owns" and beloved by celebs. Her father also cleans up incredibly well when off the field (well, and on field, let's be honest). Just check out the photo above, as he rocks that navy suit.

So based on her already developing personal style, Harper right up there with the leather-clad North West, model Coco Rocha's daughter Ioni, and Jessica Alba's daughters, among others. But I must admit that this tattoo made me melt. It's so much more personal than the standard "Daddy's Little Girl" tattoo, but it conveys the same message.

You can see that the "Pretty Lady" etching is fresh, since it's red and a bit darker than the already-healed Harper inking. Clearly Becks is totally in love with finally having a daughter after fathering three boys, who are also quite handsome.

Let's look at some of Harper's "Pretty Lady" looks!

She was soft and feminine, even at birth. Precious.

That's Harps from earlier this summer, owning the gray trend and doing it up with a tie sash.

She was monochromatic in white and with pigtails! Posh keeps Harper stylish but realistic with her ensembles. She's no painted doll decked out in uncomfortable and inappropriate pieces.

There she was, rocking that coral.

Once again, a pretty lady in white.

Harps was sweet in a sheer, grayish ensemble. Lovely!

Daddy was right! Harper is indeed a "Pretty Lady," and with a killer sense of style.