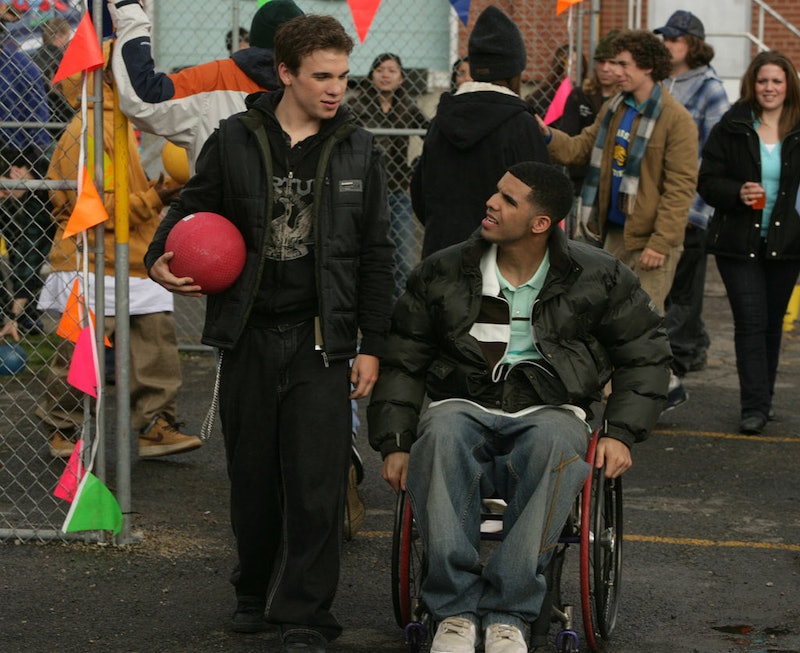 All good things must come to an end. Unless, of course, that thing is Degrassi. That'll go on forever. Degrassi fans were given a big fright when it was announced that Season 14 (!) would be the last one to air on TeenNick. Would that bring the end of hallway brawls, soapy romances, and teen drama? No. Netflix, ever the savior of shows with cult followings, picked it upand will begin a new season next year called Degrassi: Next Class . Still, this is the end of a big chapter in Degrassi's life, and TeenNick is giving the show a big sendoff, airing all-new episodes nightly until July 31. But will we see any of our old favorites in those episodes? Will any classic characters return to Degrassi for its final TeenNick season?

Sadly, for those who were looking for a Drake cameo, I think you're out of luck. Because of the timing of TeenNick's announcement, it's most likely that the entire season had been produced and shot before the creators knew that it was the last one. That's too late to put out a call to all of the Degrassi alums. (That doesn't mean that Spinner won't randomly show up again at the Dot, like he did recently, never mentioning his marriage to Emma once!) There is, however, a pre-finale special, It Goes There: Degrassi’s Most Talked About Moments, where you can see some familiar faces talking about their most memorable experiences on the show. Here's what we know so far.

Who Will Be There?

Check any Degrassi social media account, and you'll get a sneak peek at who's coming to the class reunion. Adamo Ruggiero (Marco) posted this photo of a few of the long-timers, who were on the show back when it was called Degrassi: The Next Generation. Spotted on his Instagram? Miriam McDonald (Emma), Annie Clark (Fiona), Charlotte Arnold (Holly J), and of course, Shane Kippel (Spinner).

Lauren Collins (Paige) had her own Instagram photos to post, which includes a shot of one Jake Epstein (Craig). Stacey Farber also shows up in a shot or two. The crazy thing is, most of them look exactly the same as they did when they were on Degrassi.

If you didn't catch on to Degrassi right away, you won't be left out entirely. It looks like all eras of Degrassi will be represented. Raymond Ablack (Sav) posted this photo, which spans Degrassi generations with old-timer Kippel and current castmembers Melinda Shankar (Ali) and Luke Bilyk (Drew), plus a couple people I don't recognize. (Is that Danny? I think it might be!)

Anyone Not On Social Media?

There are a few people who look like they turned out for the special even if they didn't show up on any Instagram feeds. In a promo for it, I spy Paula Brancati (Jane), Alicia Josipovic (Bianca), Munro Chambers (Eli), Aislinn Paul (Claire), Ana Golja (Zoe), and Jordy Todosey (Adam, looking so different with long hair).

Who Is Suspiciously Absent?

Um, hello? No Drake? I was hoping Jimmy Brooks would re-appear for a reunion with Downtown Sasquatch. Also missing? Cassie Steele, who played Manny. I guess she was too busy filming the TV movie Zombie Shark, which I bet is nowhere near as good as Jay and Silent Bob Do Degrassi.

What Burning Question Should They Answer?

I'm dying to know more about the Spinner/Emma quickie marriage. Did that last? Will their kid be in the show? Or did they get it annulled within 24 hours? (I'm a hopeless romantic, but option No. 2 seems most likely here.) Spinner randomly popped up at The Dot, sans Emma, so he's still in town. Maybe we'll have to wait until Degrassi: Next Class to find out more.