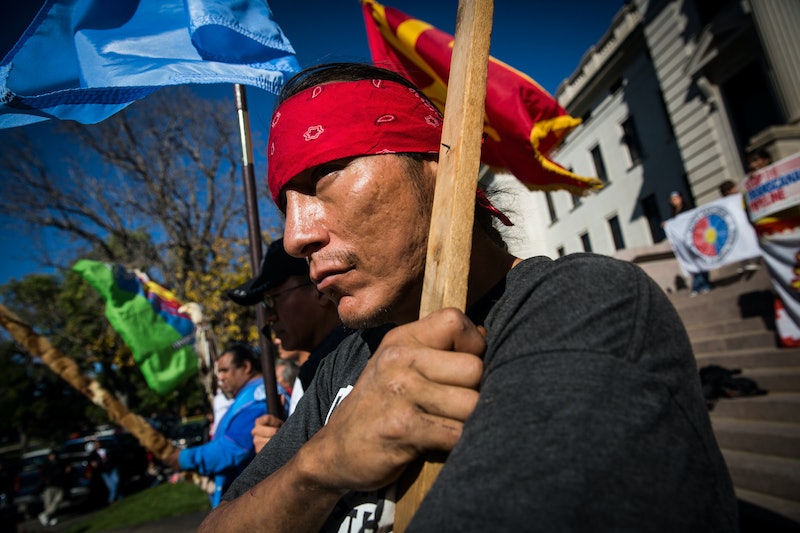 The fight to to stem police brutality against minority groups over the past few years has largely focused on the black community, from which most of the country's high-profile cases emerge. But with all the furor on both sides of the #BlackLivesMatter movement, one group in particular has been shunted to the side — and considering that it has one of the highest numbers of police-related killings among all minority groups in the United States, that's both disappointing and frustrating. So how often are Native Americans killed by police, and why haven't we heard more about it?

The latest story to make news happened quietly, one day after the hanging death of Sandra Bland in Texas' Waller County jail on July 13. Fifty-three-year-old Choctaw activist Rexdale Henry had been arrested on July 9 for failing to pay a fine (which is an argument for another day). Five days later, Henry was found dead of unspecified causes in his cell at the Neshoba County Jail in Philadelphia, Mississippi. Update — A spokesperson from the Mississippi Attorney General's office has responded to Bustle's inquiry with the following statement: "It is this office’s policy that we can neither confirm, deny nor comment on any investigation if there is an investigation with our office."

According to a report by The Jackson Free Press, Henry's body was found at 10 a.m. on July 14. Official paperwork showed that he had last been seen alive just 30 minutes prior.

Although the state performed a standard autopsy on Henry's body, the family requested its own private autopsy as well.

"At a time when the nation is focused on the terrible circumstances of the brutal death of Sandra Bland, it is critical to expose the many ways in which Black Americans, Native Americans, and other minorities are being arrested for minor charges and end up dead in jail cells," said Syracuse University Law professor Janis McDonald in a statement to Fusion reporters on Monday. "His family wants to know what or who caused their healthy 53-year-old loved one to die in that cell."

The CDC's National Center for Health Statistics has reported that, among the top three groups most often killed in police-or-state-related deaths, indigenous Americans take up two of those spots (African Americans aged 20-24 are first, with Native Americans aged 20-34 and 35-44 coming in the second and third spots, respectively).

Attorney Chase Iron Eyes, who works with the Lakota People's Law Project, based in South Dakota, told Mother Jones earlier this month that the problem wasn't new, and that the national government needed desperately to address the issue.

"This is a reflection of an endemic problem in the perception of non-white people when it comes to the administration of justice," he told the outlet. This followed the shooting death of Lakota Sioux man Paul Castaway, 35, who was shot by police officers on July 12 after (they claimed) he came at them with a knife. Castaway's family later asserted that he had been suffering from schizophrenia and alcohol problems, and that he had been holding the knife to his own throat when the officers opened fire.

"[A woman crying on the steps of their home] was like, 'My baby is dead, they shot him, I know they shot him,'" recalled one neighbor later, in a comment to The Denver Post .

The officer who fired the shots, Patrolman Michael Traudt, was later placed on administrative leave pending a full investigation of the incident.

As Mic pointed out in February, the number of Native Americans in the United States numbers only around five million. In proportion to their numbers, the percentage killed either in police-related incidents or while in custody is disheartening, especially given the fact that few large media outlets ever pick up on the victims' stories. But a growing movement is beginning to blossom, giving hope to indigenous activists trying to turn the spotlight in their direction for once.

"We protest, we take to social media, we get as many stories and Native American voices as we can into news media," activist and journalist Simon Moya-Smith told Mic reporters. "We're not entirely on [the mainstream media's] radar – maybe for Indian mascots, but for police brutality? Barely, if at all."

Moya-Smith explained in an op-ed for CNN last December:

Despite the available statistical evidence, most people don't know that Native Americans are most likely to be killed by police, compared with other racial groups. Native Americans make up about 0.8% of the population, yet account for 1.9% of police killings.

When Native Americans are shot and killed by law enforcement, there's rarely much news coverage of those incidents. There are no outcries from any community other than our own. There are no white or black faces rallying around us, marching with us, protesting with us over this injustice. Why? Because we are a forgotten people.

The depressing case of Rexdale Henry is just the tip of a very large iceberg. And with a continued lack of media presence surrounding both Henry's case and the cases of those who have passed before him, it's up to the federal government to step in and do something, explained Chase Iron Eyes:

You can tell they're shooting out of fear. If it's not out of hate, for some reason they're pulling the trigger before determining what the situation actually is. Something does need to happen. Somebody does need to take a look and we need help.

More like this
The Most Powerful Photos From The Weekend’s Abortion Rights Protests
By Melanie Mignucci
Why You're Seeing Green Bandanas At Abortion Rights Protests
By Lexi Inks
5 Ways To Stand In Solidarity With Women In America From The UK
By Sophie McEvoy
How To Fight For Reproductive Rights, Based On How Much Time You Have
By Courtney Young
Get Even More From Bustle — Sign Up For The Newsletter