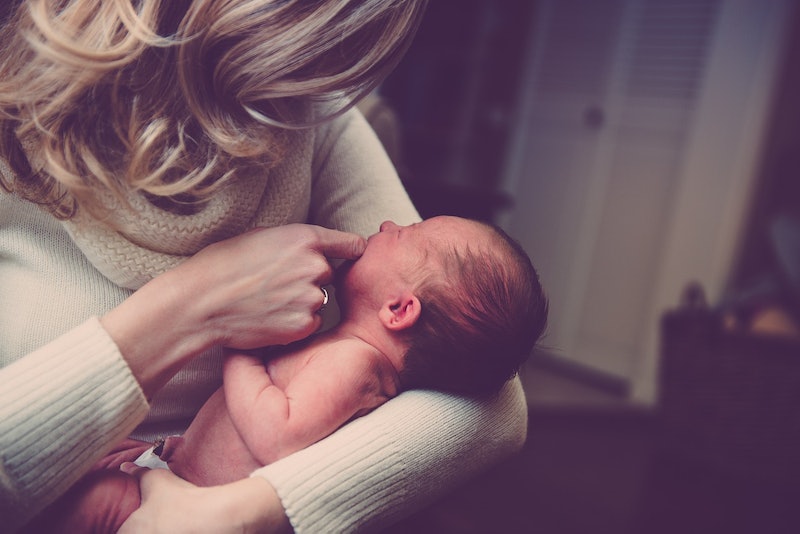 For those of us who aren't mothers, taking care of a newborn is uncharted territory. We don't know the first thing about the nine months of pregnancy, the first few days of breastfeeding, or how difficult the transition of becoming a parent can be. But that doesn't mean we can't be a solid support. As we watch the women in our lives move through the phases of life we haven't reached yet — or that we decide we aren't suited for — it's important to stand by their sides and remind them that they're not alone. I only speak as a bystander, but I think it's safe to say giving birth is one of the most transformative experiences a female can go through.

A friend of mine had her beautiful, perfectly adorable baby Alex only 13 days ago and I've had the pleasure of being around for most of the fun — the diaper changes, his cute facial expressions, the feeling that a teeny-tiny miracle just took place. I'm in awe of her strength and grace through it all, even when the birth didn't go as planned. In short, I have a new respect for womanhood.

Even though I'm nowhere close to being ready for offspring myself, I've learned a lot about what it means to be accommodating for someone who has taken the leap. Read on for seven ways to help a new mommy.

A new mother doesn't have much time or energy to spend an hour in the kitchen preparing a healthy meal for herself and the family — but she still needs to eat. When breastfeeding, women sometimes need an extra 500 calories a day in order to keep their energy up. Offer to stop by and cook something nutritious, or bring over a few dishes they can toss in the freezer and heat up later. That gives them one less thing to worry about as they're adjusting to the new baby's schedule.

Keep in mind there are certain foods that don't fit well with breastfeeding, like high-mercury fish and peppermint, which can inhibit the production of breast milk. Also, while some doctors say spicy food is OK, it's up to the mother; it depends on how the baby reacts and how she feels while consuming it. So ask before you make a curry that has a bite.

2. Help Clean Up Around The House

When little Alex started running the show, my friend and her husband weren't exactly left with much time to keep the house in tip-top shape. I realized quickly that the smallest things bring them a big smile — and a sigh of relief. Do the normal things you would do at your own place, like laundry and washing the dishes. Take the dogs for a walk. This could even free up some time for the devoted mother to get out of the house, if she's feeling up to it.

Say your friend isn't comfortable watching you clean up after her — understandable enough — but don't just give up on the idea. Hire someone from a cleaning company to come in and get everything sparkling once again. And under no circumstances are you to accept money from the new parents.

3. Be A Good Listener

The body goes through some serious changes during and after pregnancy. Plus, the fact that you now are fully responsible for another human life can be daunting, even frightening. Tammy Gold, a New York-based psychotherapist and certified parenting coach, says every new mother struggles with the transitional phase. There may be times when your friend simply wants to talk about what she's going through. Even though you've never been in her shoes, listening with open ears is a great way to show your support.

Remember: approximately 10-15 percent of new moms suffer from postpartum depression. It can happen to anyone, and it has nothing to do with their abilities or desire to care for their child. You can't do anything to fix it, but having an affirmative friend close by who can lend an ear will certainly be of help to her.

4. Give Her Some Space

It's natural to want to rush over the first second she returns from the hospital to see the little bundle of joy. However, she will likely want a little space — not only to physically recover after a long, hard labor, but to catch up emotionally. No matter how close she is with the friends who want to come by, she might still feel like she has to entertain guests, and that can be nearly impossible when you're drained of all your life force.

Send over a nice note congratulating them, and allow at least a few days or even a week to pass before you inquire about coming by and helping them out. Everyone is probably overwhelmed, and they're trying their hardest to get a solid routine going. Let them do their thing!

Unfortunately, there is a lot of judgment passed on how women's birth plans and how they should care for their brand new baby. Dr. Samantha Rodman of DrPsychMom says new moms even tend to judge themselves too much. The last thing you should do is add to the burden. Even if you think you would have done things differently, don't go there. Stay positive and continue to encourage her.

Mother and author Leonie Dawson said that for her, the few days after giving birth were much harder than expected; she suggests we tell all new mamas that they're doing great, that it's OK to feel whatever they're feeling. I said one simple thing to my friend when I saw her with Alex for the first time, and I could see it touched her heart: "You did really good."

Pick up some groceries for her, grab a few packs of diapers, and fetch any packages they might be waiting for. Leaving the house is not an easy feat when you've got a super small human to care for 24/7, so they will be thrilled to be relieved of such duties.

Two things they can never get enough of are diapers and baby wipes. Nurse and writer Shelly Lopez Gray says it's a great idea to bring over both each time you arrive at their house. This will probably save the mommy an extra trip. Another option? Propose to watch the baby while she runs a few errands by herself; that way, she gets some time alone.

Mothers love to see family and friends dote on their newborn. This affection can come in all sorts of forms — a box of baby clothes, a handmade quilt, or the mere offer to hold the baby while she rests. It's an extremely joyous time in a woman's life, so add to the happiness.

When I held Alex for the first time, I couldn't help but dote on every single inch of him, especially his button nose. My friend loved how much I loved him! We squealed and giggled over his tiny mini ears, and it brought her so much delight to see that she and her husband weren't the only two people on the planet mesmerized by the little beauty. Moments like this remind parents how fun the whole baby thing can be.