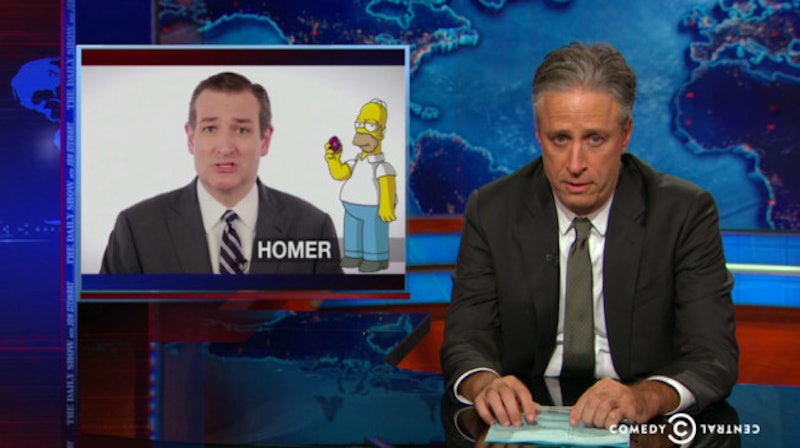 As if Mondays aren't bad enough, this one just got even worse. Ted Cruz was scheduled to be on Comedy Central's The Daily Show with Jon Stewart, but is no longer set to appear, according to a representative from the show, who declined to provide their name to Bustle. Look, it goes without saying that Cruz on The Daily Show would have been hilarious. So even though you won't see him on the show tonight, here are four clips of The Daily Show poking fun at Cruz to watch instead.

According to The Daily Show's official Facebook page Sunday, Cruz cancelled his appearance "due to official Senate business." Instead, Pulitzer-Prize-wining writer David McCullough will appear on Monday's show.

The Texas senator has been campaigning for the Republican presidential nomination since he announced his run in March. The Daily Show has been equally hard at work mocking the conservative senator. Tom Cruise is scheduled to appear on the show Tuesday, and if you say his name really fast, it sounds like Ted Cruz ... sort of. I know you're disappointed — we're all disappointed to miss Jon Stewart getting an opportunity to lay into Cruz! — so here are four of the best clips of Stewart making fun of Ted Cruz for you to watch instead.

Prompted by his 2016 presidential campaign announcement, Jon Stewart made fun of Cruz having to practice his waving and kissing for his announcement at Liberty University. The crowds at his speech? Stewart points out the rows full of students on their phones, none of whom seemed to want to be there ... which could very well be true, since the event was required. I won't give the rest away, but here's a hint: It includes Snapchat, Harry Potter, and jabs at Cruz. What more could you want?

Let's Get Rid of Ted Cruz

There are a lot of Republicans running for president (16 at last count). How does Stewart suggest we narrow the pool? Easy: Just get rid of Ted Cruz. This montage shows off Cruz's hilarious hypocrisy, his glaring inconsistencies, and him simply drowning while trying to respond to reporters.

Cruz "auditioned" for The Simpsons in a strange BuzzFeed video, poorly imitating various characters. Stewart couldn't resist calling Cruz out, describing the video as "the weirdest f*cking thing [he'd] ever seen." He continues, “I have to give Ted Cruz credit — usually, you have to wait until you’re actually President to do that much damage to something America holds so dear.”

In January, after President Obama's State of the Union address, Ted Cruz posted a response on his YouTube channel in which he talks for a minute and then says, "Eh, lemme start over." He quickly removed the video, but you can still see the clip and Stewart's hilarious comments in the show.Cruz's last-minute dropping out of The Daily Show is heartbreaking, but hopefully, these were enough for now. Anyway, its only a matter of time before the show makes fun of Cruz again — and odds are you won't have to wait long. Images: Getty (1)