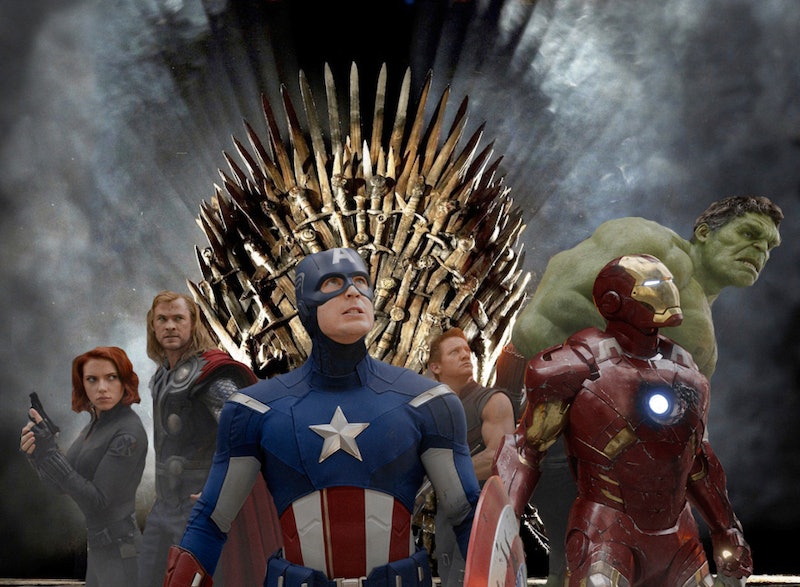 Sometimes, mash-ups just write themselves. You may have heard that, recently, author George R. R. Martin criticized Marvel villains — specifically those featured in Marvel films. But, all that did was make me think, what would happen if the Avengers were in Game of Thrones ? In a blog post that the Game of Thrones scribe wrote, Martin identified a bad habit that the Marvel Cinematic Universe has gotten into:

I am tired of this Marvel movie trope where the bad guy has the same powers as the hero. The Hulk fought the Abomination, who is just a bad Hulk. Spider-Man fights Venom, who is just a bad Spider-Man. Iron Man fights Ironmonger, a bad Iron Man. Yawn. I want more films where the hero and the villain have wildly different powers. That makes the action much more interesting.

To be honest, I don't disagree with Martin's specific complaint. It is way more interesting to watch Tony Stark exchange snark with Loki, and wasn't the (spoiler alert) face off in Ant-Man between Scott Lang and the Falcon better than the final battle against Darren Cross?

Still, for the sake of fun, let's test this haterade. Are the villains in Westeros really that much better and suited for their heroes? Imagine how some of the biggest Marvel Cinematic Universe characters would play the Game of Thrones.

Anthony of House Stark, First of His Name

No, I'm not taking a Civil War stance already. With his flamboyant, arrogant lifestyle, it's easy to forget that Iron Man is not only highly intelligent, but also an arms dealer. Those are valuable qualities in Westeros. His last name may be Stark, but he's more of a Lannister, and I think he and Cersei would form a dangerous alliance. However, even Pepper couldn't protect him from any assassination plots.

With those archery skills, Hawkeye belongs in the North fighting Wildlings. However, he's way too nice. The White Walkers won't be charmed by twirling drumsticks or quips about remodeling his ranch.

Wouldn't you love to see Ramsay just try to torture the Black Widow? You're welcome, Sansa Stark. I could also see her joining the Faceless Men as an assassin.

Nick Fury, Hand of the King

Basically, Nick Fury survived the impossible and I don't think he'd have a repeat performance in the Iron Realm. His trial by combat would go the way of Oberyn Martell. Plus, of all the Game of Thrones villains, I think Tywin is the most likely to be Hydra.

Steve Rogers, Warden of the East

"The Winter Soldier is Coming..." — I'm kidding! But wait, you say, wouldn't the ever-loyal, patriotic, and earnest Captain America be more likely to go the way of Ned Stark? Absolutely not. Cap may be old, but he's learned to trust nobody. He would see through the Lannisters tricks and Steve would go rogue in a second, probably running into Team Daenerys in the process.

Scarlet Witch's powers would most certainly draw the followers of the Red God. However, the Red Lady would be suspicious, and I think the Witch would find herself on a stake before long.

Agent Coulson may have been brought back from the dead on Agents of S.H.I.E.L.D.but in the Game of Thrones universe, the consequences are slightly different. He was definitely killed in the Red Wedding while assisting House Stark.

The Asgardian prince would obviously feel most at home in this similarly faux-medieval world of King's Landing. However, the second he tried to summon lightning, I have a feeling he would be tried and murdered for heresy. I know "The Rains of Castamere" is the most popular tune in the Seven Kingdoms, but has it ever stormed on Game of Thrones?

He said it himself, he's expendable and would hang at the hands of Catelyn Stark's sometimes illogical vengeance. Without getting into electrical complications like "would Pym particles even work in Westeros," I don't think Ant-Man would ultimately survive, even if he and Luis had some sick adventures along the way.

The solider might have literal wings, but he knows how to follow orders. He'd never choose the wrong side, but he'd be better at keeping his enemies close than most.

We learned in The Avengers that it's near impossible to kill Bruce if "the other guy" has anything to say about it. However, with the constant stress and threat of dragons, I have a feeling that the Hulk is going to have a much better visit than Dr. Banner.