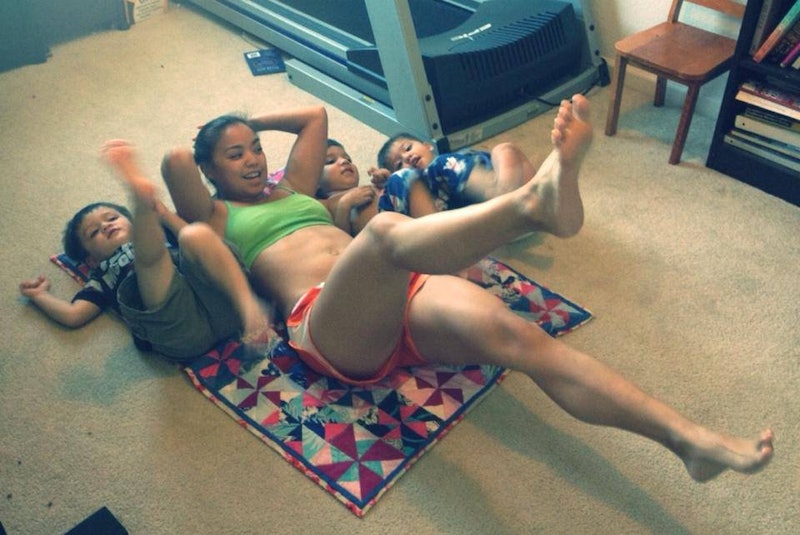 She's baaack! Maria Kang, better known as Fit Mom, is defending "fit pride" in a new Time op-ed criticizing the fat acceptance movement. Kang came to our collective knowledge via a viral Facebook post asking "What's Your Excuse?" alongside a photo of her posing in a bikini in front of her three kids. The post was temporarily removed by Facebook, but reinstated after three days.

"While I accept Facebook’s explanation that the post was pulled down automatically…(it's) amazing, frankly, that it took such a long time to get reinstated," she writes at Time. "Most disturbing, however, is that we now apparently live in a culture where other people deliberately try to — and feel entitled to — censor speech they dislike by labeling it hateful."

If you ask me, Kang seems like a cocky, nasty woman who's all too happy to use her 15 minutes of fame to spread her warped worldview that the thin and fit are somehow persecuted in society. Make no mistake: She is the victim here. "Has the growing movement promoting 'fat acceptance' and even 'fat pride' gone so far that now we need a countervailing movement promoting 'fit pride'?" Kang asks.

Still, I think she's right that we do live in an online culture of people that feel entitled to silence and shame anyone whose opinions they find distasteful. As philosophy blogger Wes Alwan recently wrote, our discourse has become circle of "competing, sentimental, and self-pitying narratives of outraged victimhood." There are a lot of people (on all sides of seemingly every argument) who would rather position opponents as hateful, oppressive, or morally unsound than engage on a more productive level.

But, sorry — no matter how many statistics Kang cites about obesity, clothing-size inflation, and the average American woman's weight, thin women are not persecuted in present-day U.S. society. Unless, of course, your idea of fair is not only the right to have whatever body type and opinions you have but to escape any (direct or implied) judgement about them. Help, help, they're oppressing me with faint disapproval! Meh. With this op-ed, our Fit Mom seems to be engaging in some of the very behavior she's criticizing.