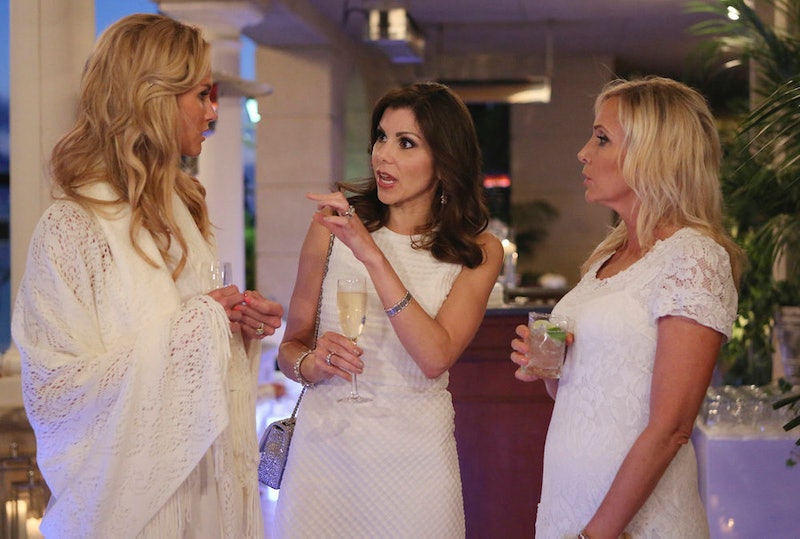 The housewives are known for bringing the drama, even when drama doesn't actually exist. And because all of the women got together in one room on Real Housewives of Orange County on Monday, of course drama ensued. It was just your average couples game night (sans couples) at the Edmonds' household when Meghan and Shannon — RHOC Season 10's feuding couple — got into yet another mini-fight over Shannon's "Judgy Eyes." Yes, you ready that correctly; we are talking about grown women arguing about Judgy Eyes. (Lest we not forget about the RHOC Evil Eye from a few seasons back.) If you've followed RHOC at all this season, you know that Judgy Eyes — no matter how quick the argument is — was a huge deal, once again solidifying that Shannon and Meghan will never, ever, ever be friends. Ever.

It all started when the women all started talking about Botox, a wonderful conversation to have at game night (especially while all the husbands are huddled around the kitchen island, just hanging out waiting for the conversation to end). Meghan shared with the ladies that she would be taking the plunge and getting Botox for the first time in between her eyebrows. Shannon seemed to have a problem with that.

Shannon's response was that of a parent's when you tell them you're doing something and they say, "That's fine, if that's what you want to do," but you can tell they don't approve of the idea. And in that situation, you think "OK, this is fight or flight." Well, Meghan chose the former, because she called Shannon out for having Judgy Eyes when talking about her upcoming Botox.

After a little "What's Judgy Eyes," and "I don't have Judgy Eyes," the two quietly went their separate ways on game night. (For a night that is supposed to be so fun, game nights on RHOC never end well.) The event, once again, proves that these two are never going to be friends. They should stop braiding their friendship bracelets, because there will be no exchange under the Weeping Willow tree at summer camp. They will definitely be seated on opposite couches at the reunion, which you know is the nail in the coffin.

Meghan and Shannon seemed to have moved beyond the initial spat they had in Napa regarding the phone call. But with these little jabs back and forth, they're never going to be friends or even comfortable acquaintances. Which is unfortunate for them, but I'm not complaining as a fan of Real Housewives of Orange County drama.