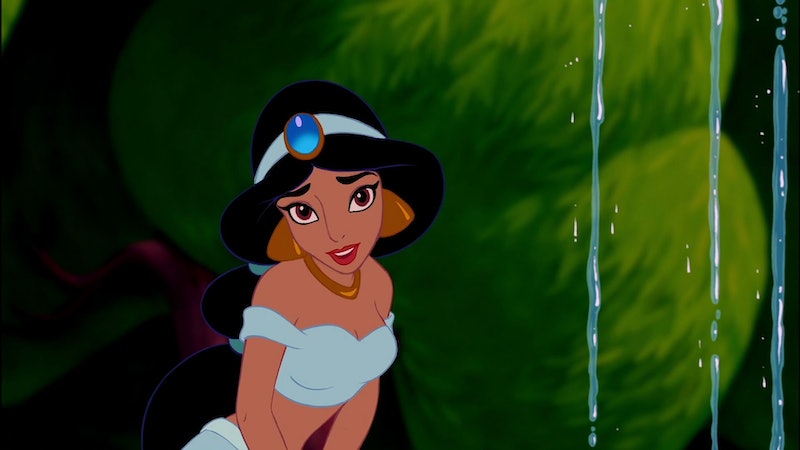 I feel like my Disney nerdery is its own separate organ that grows in my body a little bit more over time, and today, my friends, is the day it threatens to burst. Tumblr user dopeybeauty, made infamous for her gifs of bitchy Disney princesses, has now graced Disney fans with even more gif sets that the internet is freaking out over — in case you nerds missed it, she has reimagined same sex Disney relationships, and they are too perfect for words. Like, you probably never thought of 'shipping Hercules with Aladdin, Jasmine with Ariel, or even imagined Aurora and Pocahontas in the same universe, but dopeybeauty's depiction of them makes so much damn sense that I've thrown the original plot lines out the window. THIS IS MY NEW HEADCANON. EVERYONE ELSE CAN GO HOME.

What is so stunning about these gif sets is that they don't just play matchmaker, but they tell actual compelling narratives that make perfect sense in context with the original characters and films. My only genuine complaint is that now that I've had a taste of what this would look like, I want the whole damn thing in three separate 90-minute shebangs. Not to mention, some of these ships make way more sense than the original ones (sorry not sorry, anyone holdouts on #TeamEric). Here are some of the stories that dopeybeauty reimagined:

"The Aladdin/Hercules one was inspired by a 1999 episode of Hercules: The Animated Series, where Hercules and Aladdin meet each other," user dopeybeauty shared with Bustle. "I thought it would be interesting to pair them together as a couple!"

Here are the individual gifs:

Click here to reblog the bejeezus out of it.

"Jasmine and Ariel were inspired because since I did Aladdin, I wanted to make one for Jasmine, and Ariel being a mermaid made for a fun story!" said artist dopeybeauty of this particular match.

Click here to reblog this and be a ~part of its world~. (NOTE: It is much slower on the site, for some reason my gif program is speeding it up.)

"I actually picked Aurora and Pocahontas because they looked well together," said dopeybeauty. "Their art styles and character designs contrasted and made them look perfect as a couple!"

And here are the individual gifs:

Click here to gif with all the colors of this wind.

Artist dopeybeauty says that the outpouring of support and love that the gif sets have generated since going viral on Tumblr have been incredibly heartwarming. "One of the most memorable messages was someone who said that seeing their favorite Disney princesses portrayed in a LGBT relationship was very important to them, as it’s something they’d have loved to seen from Disney when they were younger!" she shared. "I was blown away by such a touched and sincere response!"

People are freaking out over the sets on Twitter as well:

She says that as long as people are enjoying them, she has plans to create more in the future, as well. Keep your eyes peeled by following her on Tumblr (or visiting her Twitter, which is currently ~under construction~). And side note, guys: she is the NICEST human on the planet, so go internet fist bump her for making everyone's day.

More like this
'Mean Girls' ​​Daniel Franzese Spoke Candidly About Conversion Therapy
By Rachel Mantock
Megan Barton-Hanson On Bi-Visibility & The Need For LGBTQ+ Love Island
By Sam Ramsden
Jujubee’s Humble Reminder
By Sam Ramsden
How To Come Out Online, According To Trevi Moran
By Melanie Mignucci
Get Even More From Bustle — Sign Up For The Newsletter