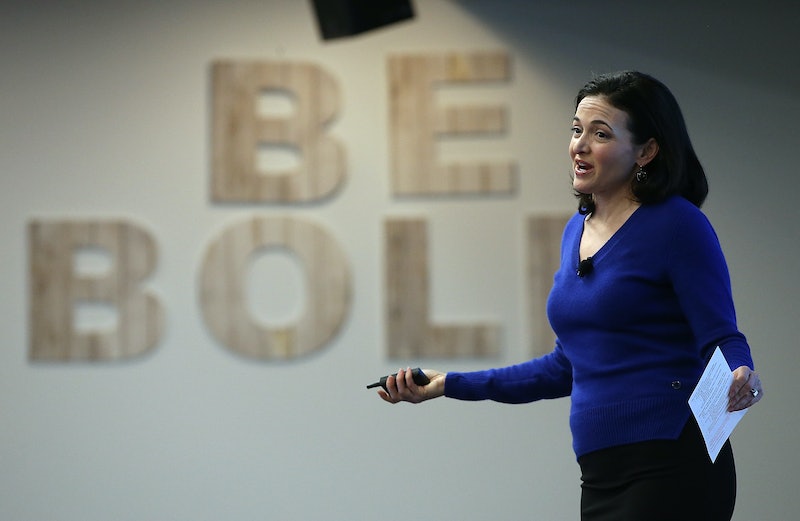 In the 2013 book Lean In, Facebook COO Sheryl Sandberg called on women to claim their spots at the "table" of male-dominated industries, as well as on everyone "to cheer on girls and women who want to sit at the table, seek challenges and lean in to their careers." But sometimes, women lack the confidence to take their seats, and other times, there's no room for them. The Harvard's Graduate School of Education's Making Caring Common project wanted to know how we can raise girls who will grow up to lean in to their careers and boys who will grow up to support them. Its report “Leaning Out: Teen Girls and Gender Biases," released this morning, sheds on light some of the obstacles impeding young women's paths to leadership, particularly during their teen years.

The biggest takeaways from the report are that girls, boys, and parents alike are guilty of unconscious gender biases, that these assumptions affect girls early on in life, and that they are preventable early on as well. Making Caring Common co-director Richard Weissbourd said in a press release:

Bias can be a powerful — and invisible — barrier to teen girls' leadership. Yet parents and teachers can do a great deal to stem these biases and help children manage them.

Here are a few of the biases discussed in the report and other studies and what we can do to curb them; head here to read the full "Leaning Out" report.

According to the report, 23 percent of girls and 40 percent of boys believe male political leaders are more effective, while only eight percent of girls and four percent of boys favor female politicians. On the bright side, the majority of girls (69 percent) and boys (56 percent) have no preference. The report suggests that parents point out gender imbalances or degrading depictions of female leaders on television or in movies to their children so that they can learn to counteract their own biases.

2. Kids prefer male leaders in their own student councils.

Not surprisingly, students most supported increasing the student council's power when white males led it. More unexpectedly, they least supported this decision when white women (not women of color) were in charge. This pattern largely stems from white girls not supporting one another, possibly because of competition, low self-esteem projected onto others, or stereotypes that girls are more dramatic. Fortunately, girls who showed greater awareness of gender discrimination at their schools were less likely to exhibit this preference, suggesting that parents and teachers can reduce sexism by teaching students about it. Schools can also offer leadership classes and programs for girls that encourage them to view themselves and other girls as potential leaders.

3. Moms are also biased toward boys as leaders.

When presented with the same question about the student council's power, mothers were also more likely to support student councils led by boys. Therefore, parents and teachers need to keep in mind that they might reinforce gender stereotypes without realizing it, such as by using the word "bossy" to describe girls.

According to a meta-analysis on leadership stereotypes, people are more likely to attribute successful leadership to traditionally masculine traits like assertiveness than feminine ones like compassion. Yet, as we saw in the backlash against former New York Times Executive Editor Jill Abramson, women are often penalized for possessing the traits people associate with leadership. If we feel tempted to consider a girl or woman too pushy, loud, or bossy, it's worth asking ourselves if we would say the same thing about a boy or man.

One study showed that fields considered to require innate intelligence were less populated by women, who opted for academic paths that supposedly just require hard work. Adults should make sure to compliment girls on their intelligence rather than merely their hard work (or, even worse, their looks) so they know that computer science, math, and philosophy are for them too.