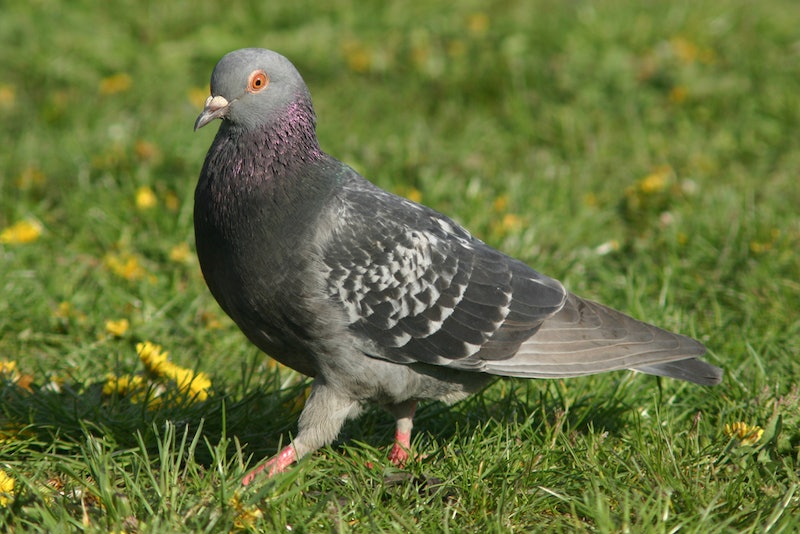 In recent weeks, U.K. residents have been baffled by the mysterious appearance of pink pigeons in towns across Britain. The bizarrely color birds — ranging in hue from a delicate blush to a full-on fuchsia — have sparked intense speculation about their origins and purpose, with (thus far, at least) little in the way of explanation. Where are these rosy birds coming from? Are these the unholy offspring of a pigeon and a flamingo’s illicit affair? Have these pigeons been exposed to some kind of hot pink, radioactive industrial waste? And if so, are they now chemically enhanced super pigeons with super strength and intelligence, here to protect normal pigeons from their evil human overlords? Why the hell are they pink?? The world needs to know!

On Sunday, the Manchester Evening News posted an article with a photo of a pink pigeon spotted recently in Stockport, a town near Manchester. Wes Charnock, who took the photo, told the newspaper, “It did seem tired, so I thought it might have been in a race but I’ve never seen a pigeon dyed pink before.” Facebook users have shared the post over 500 times, and hundreds of people have commented, many of them confirming that they have also seen the pink pigeon in Stockport.

A number of people have also posted pictures to Facebook and Twitter of other mysteriously colored pigeons taken in different parts of England. Some of these images are recent, while others were taken years ago.

Commenters have proposed a number of possible explanations for the strange birds. Some have theorized that they are racing pigeons, and that the colors help their owners to keep track of them. One commenter writes, for example,

That looks like the racing pigeons here in Spain, the owners all have their own colours to identify the birds.

Others suggest that the birds have been dyed to match a wedding:

Its probably from a wedding, greenmound bird hospital gets them all the time

Another commenter posits that this coloring could be caused by local industry, writing,

I used to work in Miles Platting and there were blue pigeons there due to a dyeworks!

Mashable reached out to ecologist David Noble, member of the British Trust for Ornithology, who offered his two cents on the matter:

I have no idea really but apparently you can pay to have doves released at weddings or other events, and someone here also heard of a company offering something like a 'colourful display of pigeons.’ I found a link to one in Australia and there is likely to be something similar in the UK. So we suspect that might be the source.

All of these explanations seem plausible, though nothing has been confirmed. I also wouldn't be surprised if these birds were being dyed by some person in his or her backyard and then released just to mess with people. I mean, if the goal was to get people fired up and confused, it's worked perfectly, right?